This project consists of the design and construction of two bamboo chapels that replaced the previous structures destroyed by the 7.8 magnitude earthquake that struck the coast of Ecuador on April 16, 2016. The project was executed during 12 weekends thanks to the joint efforts and collaborative work between professionals, local inhabitants and volunteers. Located in the outskirt of the city of Jama, the construction was financed through international donations and with the support of another charity organization Caritas La Primavera.

The villages where these chapels are located lack public spaces for gatherings and social interaction. Its inhabitants, mostly of low income level, work on the field or in the local industry nearby Jama. The village of Camarones has more than 500 inhabitants while Santo Tomás and its surroundings has more than 125 families. The chapel has become a landmark for the community and a place for personal and communal prayer. It’s a space actively used for adult gatherings and for the kids weekly catechesis classes.
The project stands out for its architectural quality and for its structural innovation that allowed us to implement construction techniques that can be replicated and learned by the village dwellers.
There was a constant collaboration between the locals and the professionals involved in the project during all its construction phases which resulted on a dynamic exchange of knowledge that benefited everyone involved. These connections and the important role played by the local community during the construction process, contributed to cultivating a sense of belonging and forging a resilient spirit within the community that was heavily affected by a natural disaster that will mark the rest of their lives.
The project also included a landscape intervention. In the village of Camarones we connected the chapel with the existing sport field through a small garden where different local species were planted. The construction of these spaces, through small collective efforts, brought a significant enhancement of the natural environment and a cleaner and better preserved public space.

The process strengthened the connection between different communities of the area and woke up a service vocation among the volunteers who traveled to Jama during the weekends to contribute to the construction of these chapels.

Bamboo, locally know as cana guadua, is the main building material used to construct the chapels. It was chosen by both communities as a response to the little damaged suffered by bamboo buildings during the earthquake. Their previous chapels and most of their buildings are built out of concrete blocks or bricks. Bamboo is a local material known for its flexibility giving it good resistance qualities during earthquakes. Bamboo is a light material and also economic. In this project it was used in a variety of ways, both as architectural and engineering elements: lattice walls, structure and roof.
The rhythmic placement of the lattice, created and enhanced different perceptions and senses allowing the sacred space to be private yet transparent and allowing the space to be natural ventilated and to have a direct visual and auditive connection with its natural and rural context.
For the chapel’s furniture we used bamboo and white laurel wood. Every furniture piece is designed for the chapel, from the stools to the liturgical elements as well as the lamps. 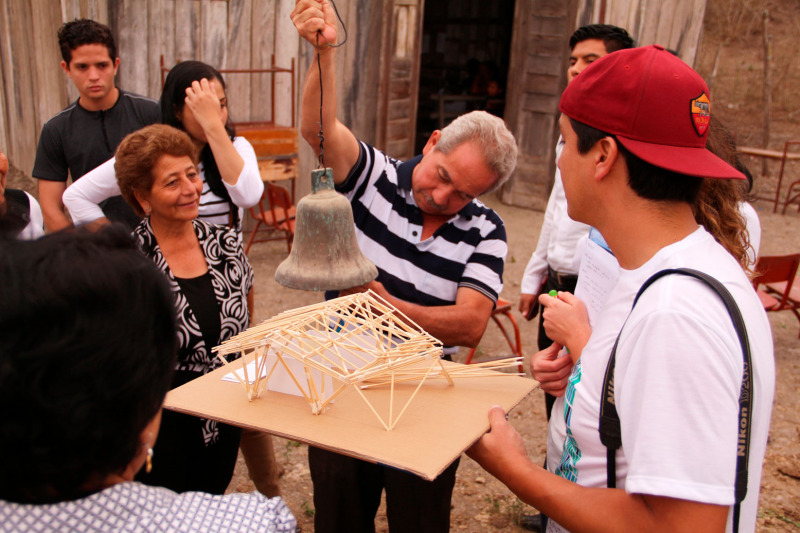 Project presentation to the community 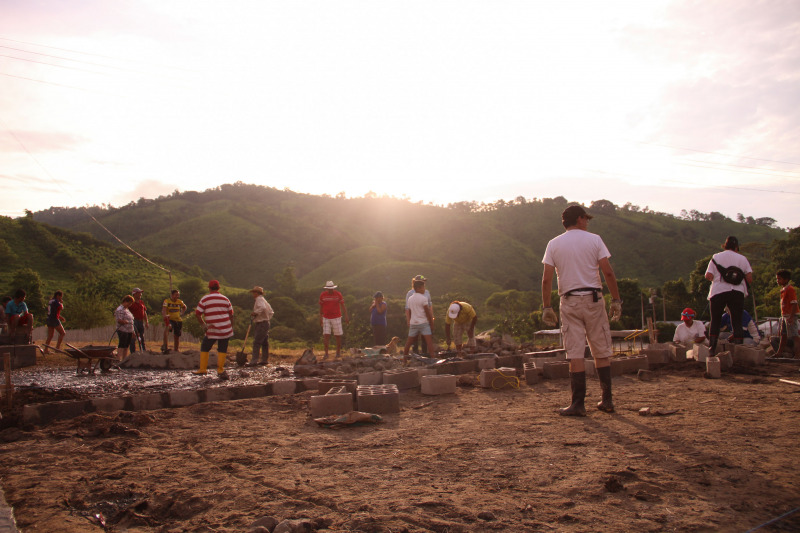 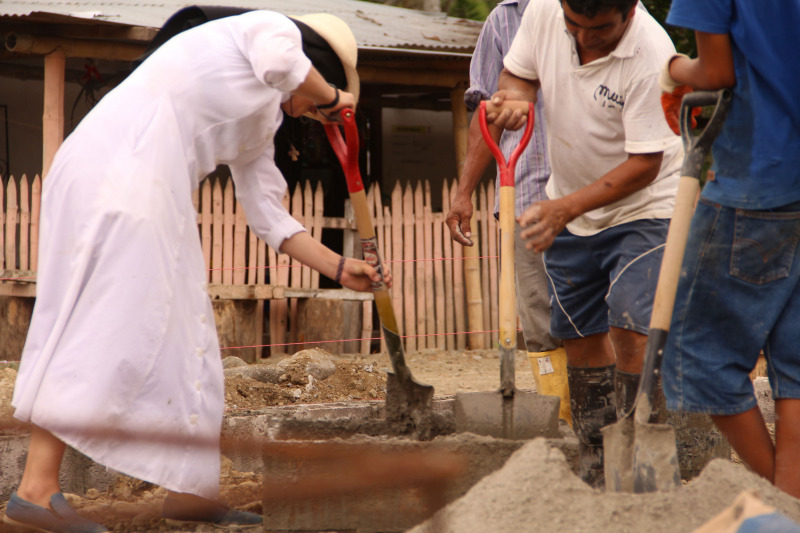 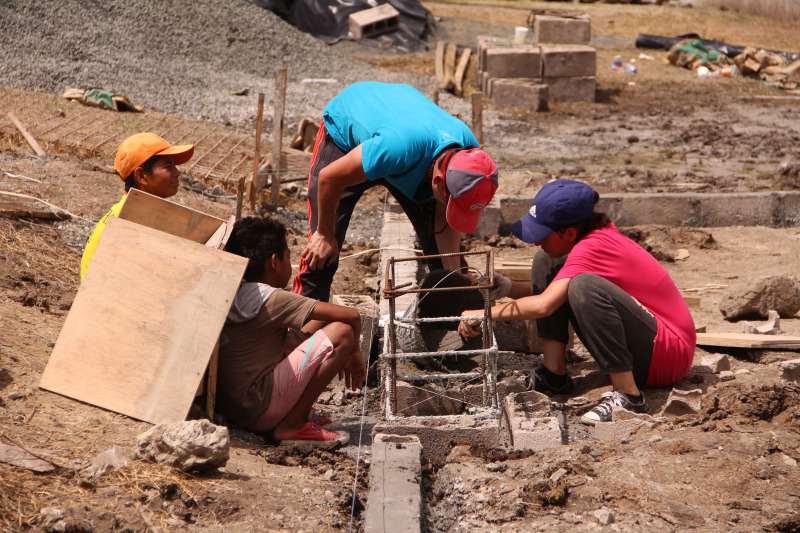 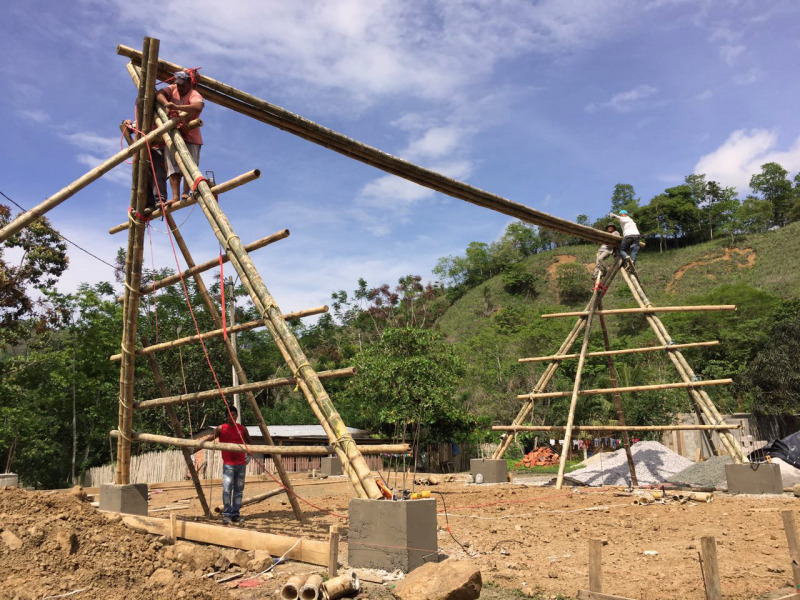 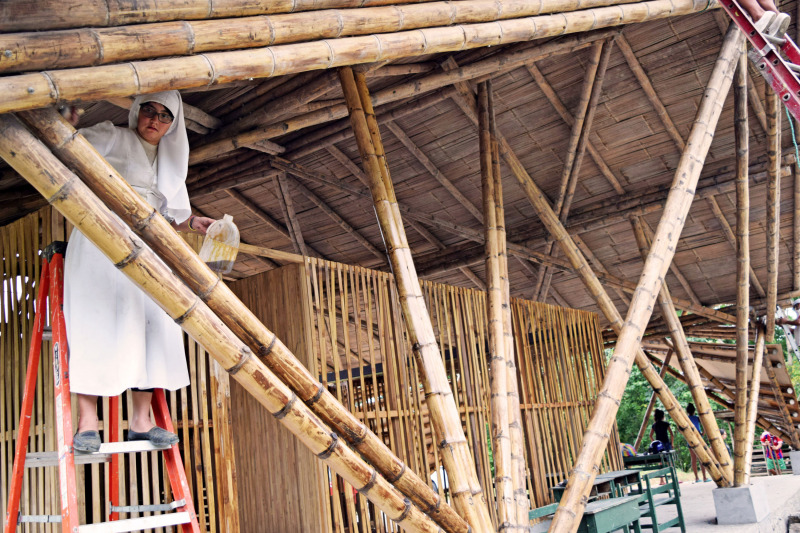 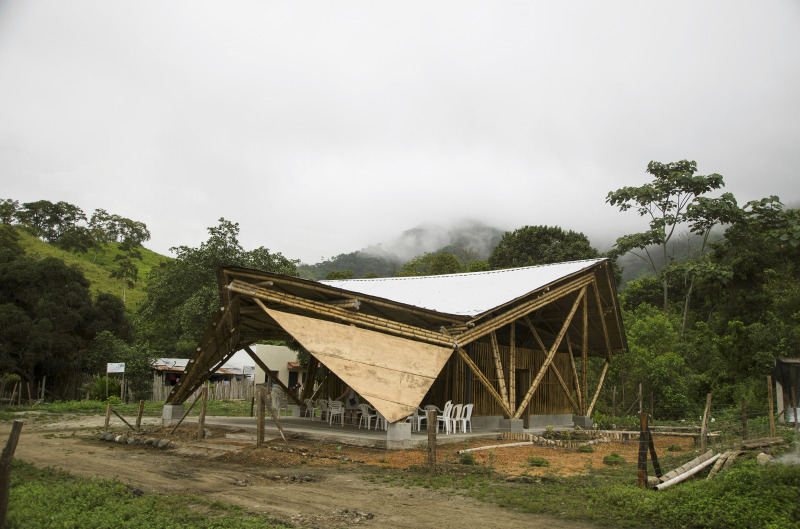 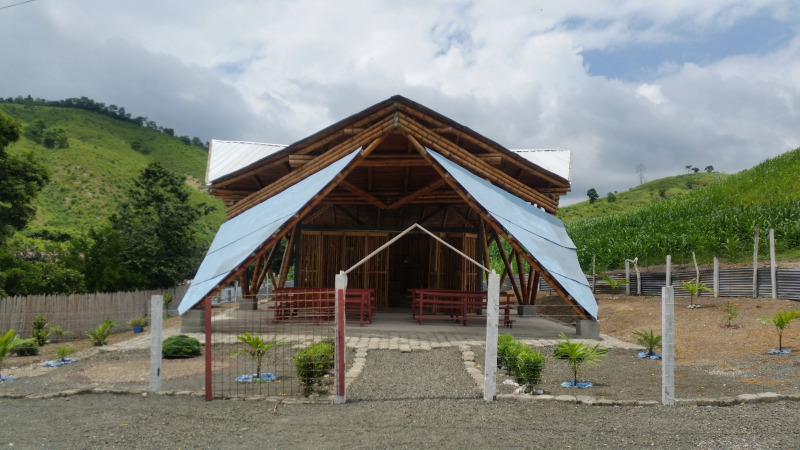 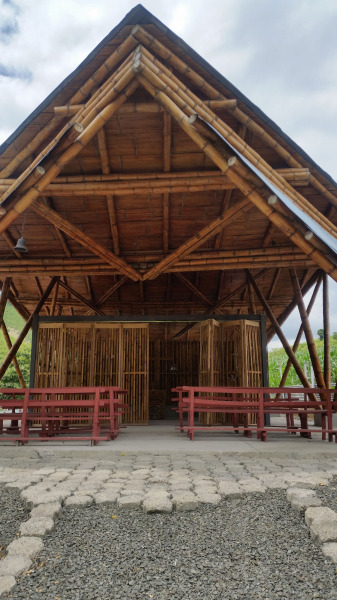 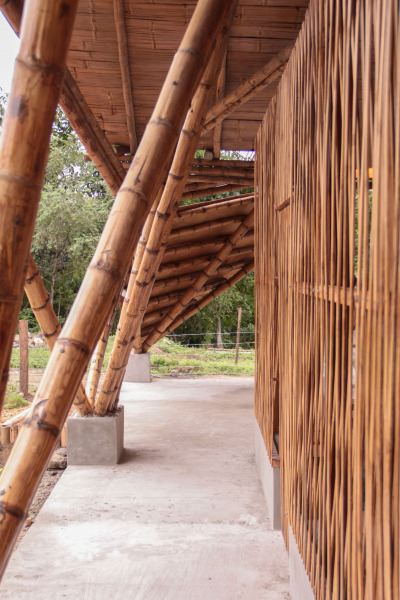 In between exterior/ interior 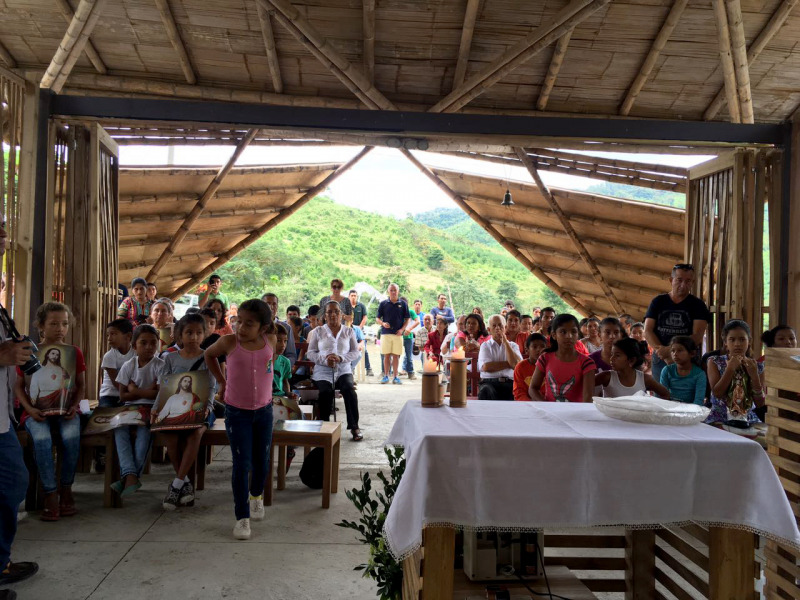 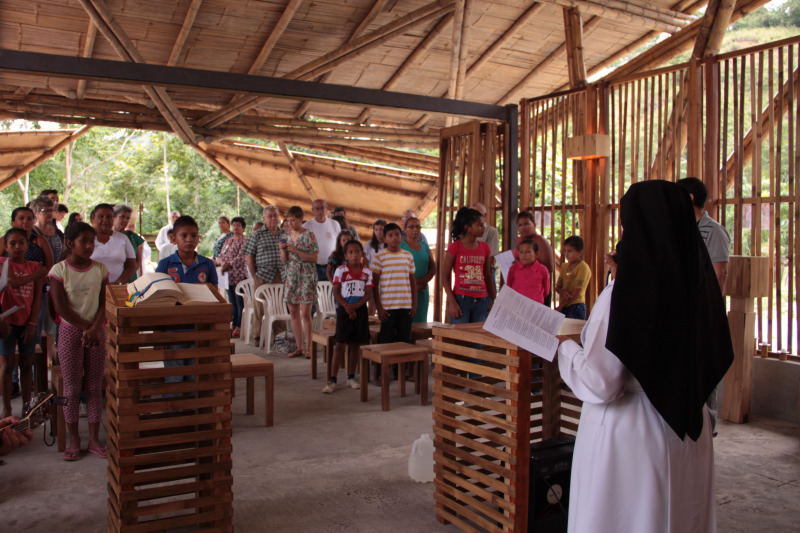 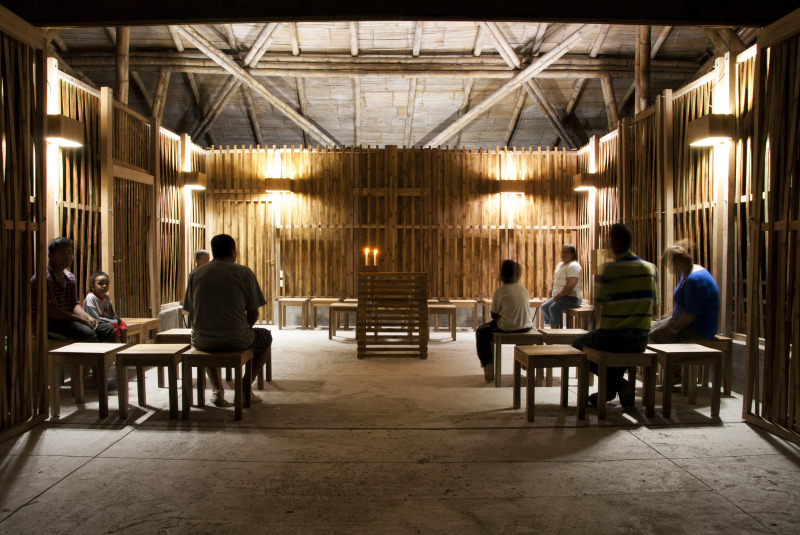 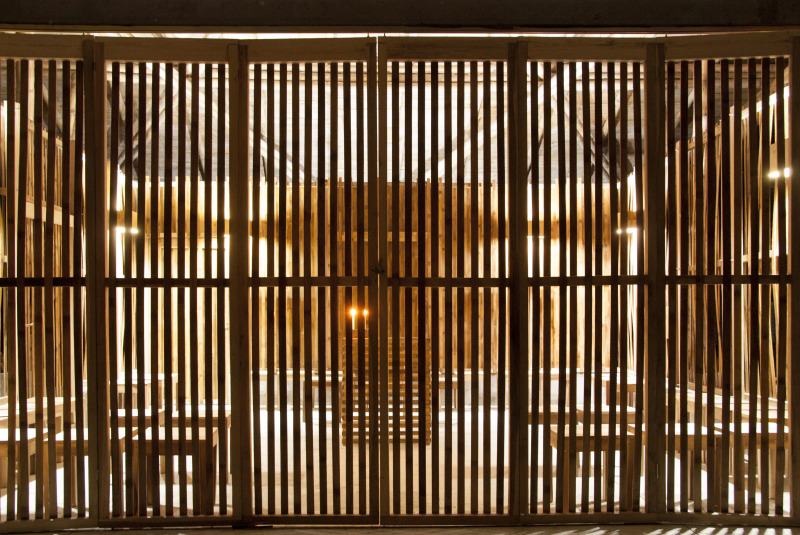 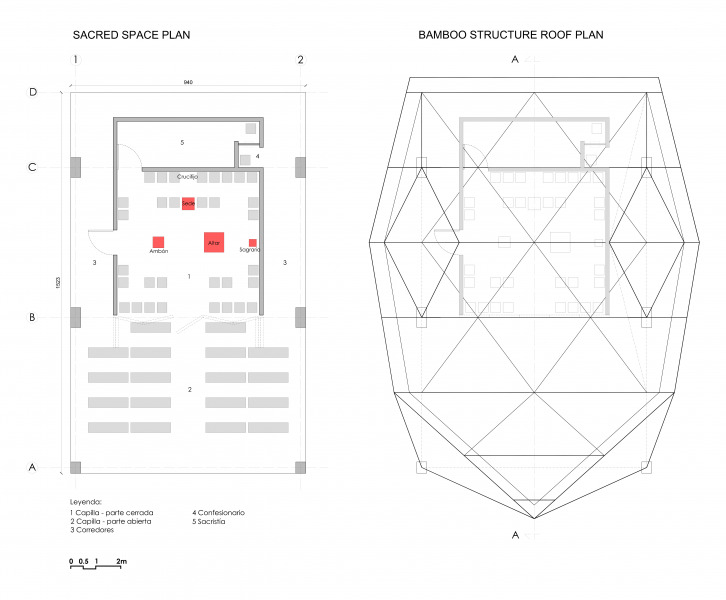 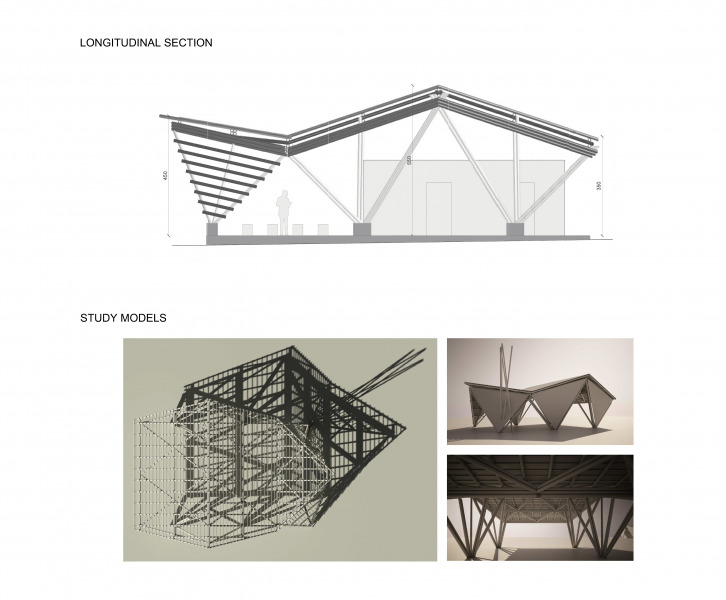