The Njoro Children’s Library is located in Mailisita, on the lower slopes of Mount Kilimanjaro. The area is situated in isolation and the Njoro Primary School must function efficiently without the use of grid energy.
The project was started by Patricia Erimescu in collaboration with the local NGO Excel Education Foundation to complete educational facilities in Tanzania and it’s a participative project built by locals and volunteers. The Njoro Children’s Library aims to develop education and to involve children, parents, teachers, locals and international volunteers to come together to build a place where pupils can read and study.
Serving 408 kids of Njoro Primary School and also the pupils from other three schools in the surrounding area, the library is important in terms of giving the pupils access to books and reading in a region in which most have no books at home. 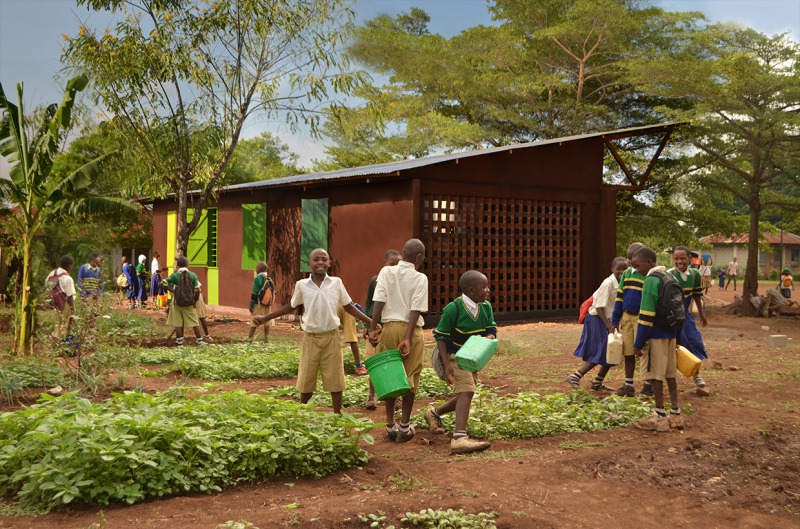 View of the library from the vegetable garden. The building engage with its surroundings.

The goal of this project is not only a well functioning library, the project also offers students and local people an opportunity to learn about construction work. The building process itself plays an important role in the sustainable development of building locally and traditional building techniques. The locals and craftsmen work closely together with the volunteers to involve them in all stages of the building process. Steps are taken carefully to improve and refine building methods in continuation on existing methods, traditions and knowledge. Besides this, involvement of the whole community in the project is important, not only because building together is part of the local tradition, also to create a communal responsibility for the maintenance of the library. 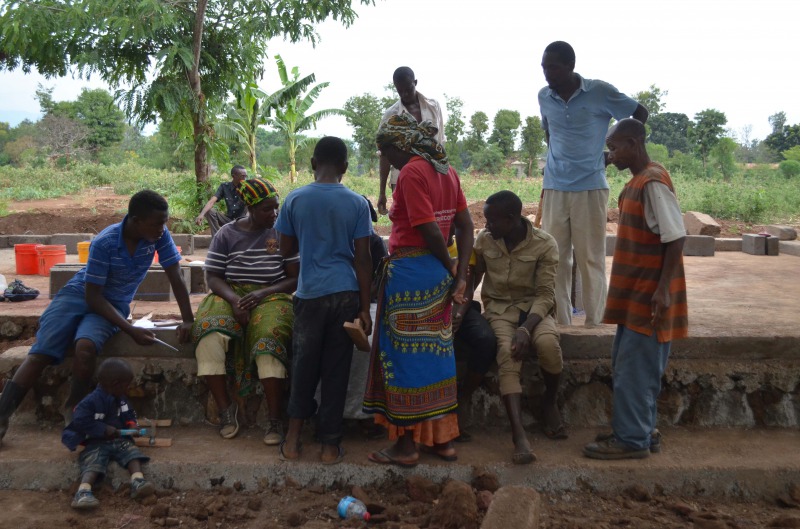 The building is realized with different kinds of blocks, such as earth compresed blocks made by locals and volunteers, recused concrete blocks from an old abandoned building and burned clay blocks. 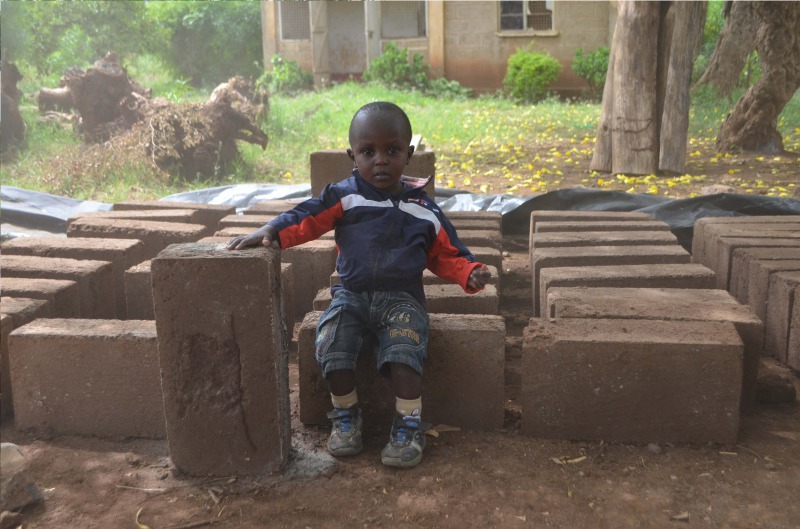 Kid sitting on earth blocks while his mother was working 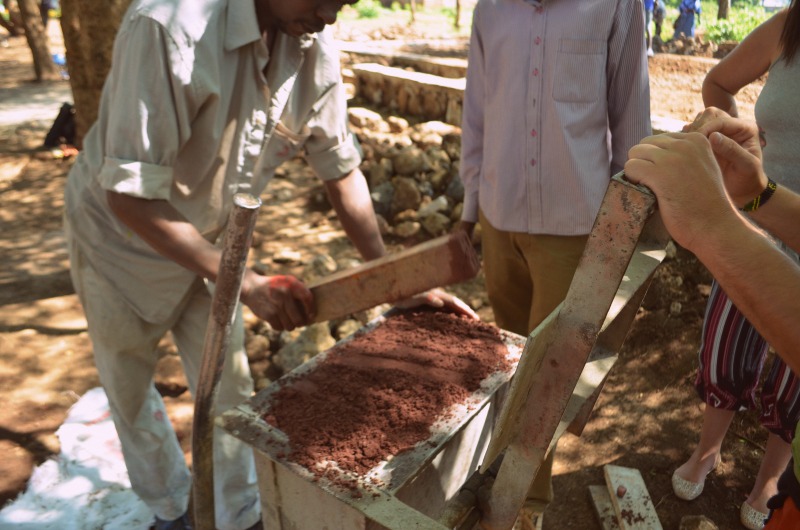 The earth block pressing machine is mobile, so the blocks could be made on the construction site

Mailisita Village is situated on the lower slopes of Mount Kilimanjaro, about 10 km to the Moshi City and characterized by the alternation of a dry and a rainy season. The area has a tropical wet and dry climate and is known for extensive farms of maize and beans, grown once per year during the long rainy season. Its weather is dominated year round by monsoonal flow. The northeast monsoon prevails December through March and is accompanied by the highest temperatures of the year. The southeast monsoon prevails from June through September. Unique among the world's monsoons, both monsoons in Tanzania are divergent in the low levels, shallow (averaging only 2 km in depth), and capped by inversion and dry, subsiding air. These factors result in light or insignificant rainfall year round except during the transitional periods between the monsoons. 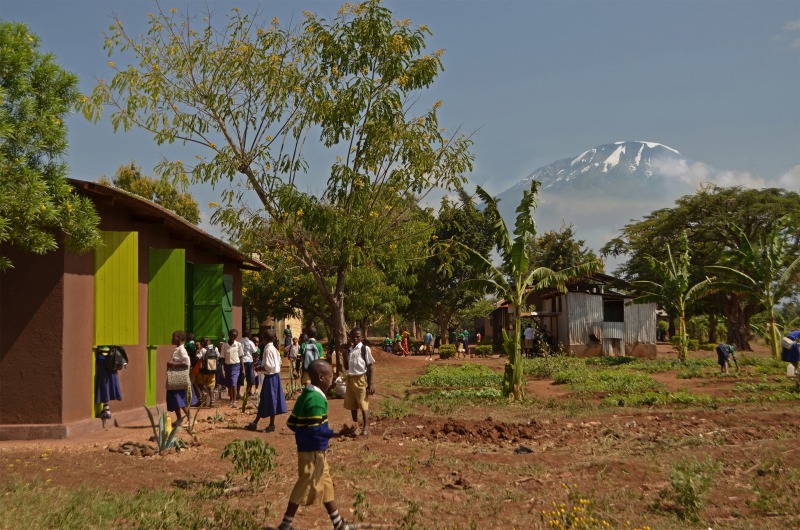 children’s library with the mount kilimanjaro ion the background 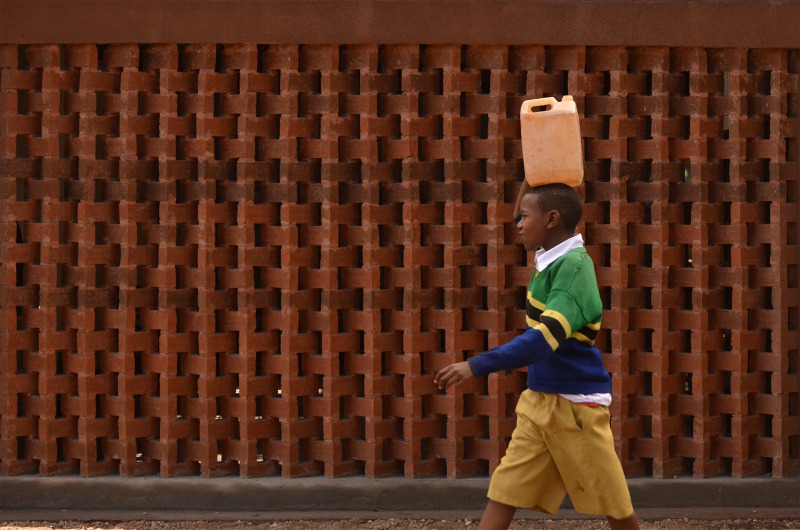 the brick wall, the vents, and the shady trees contribute to a comfortable inside climate 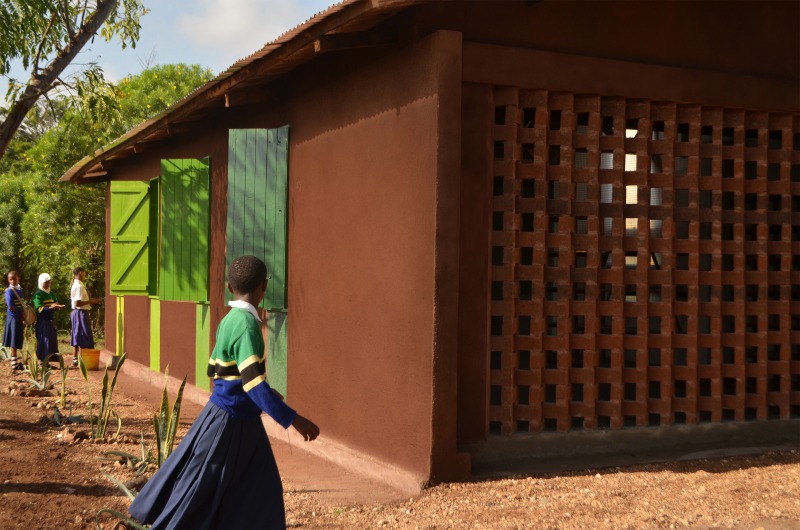 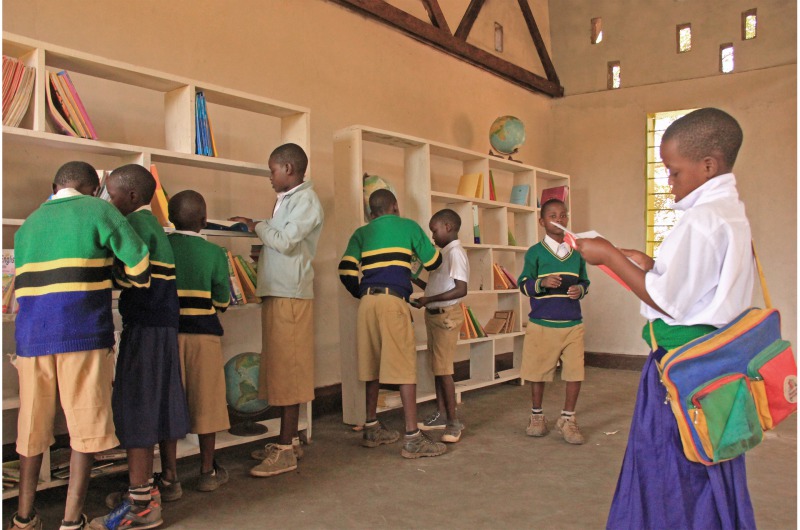 interior with the shelves made from recycled wood 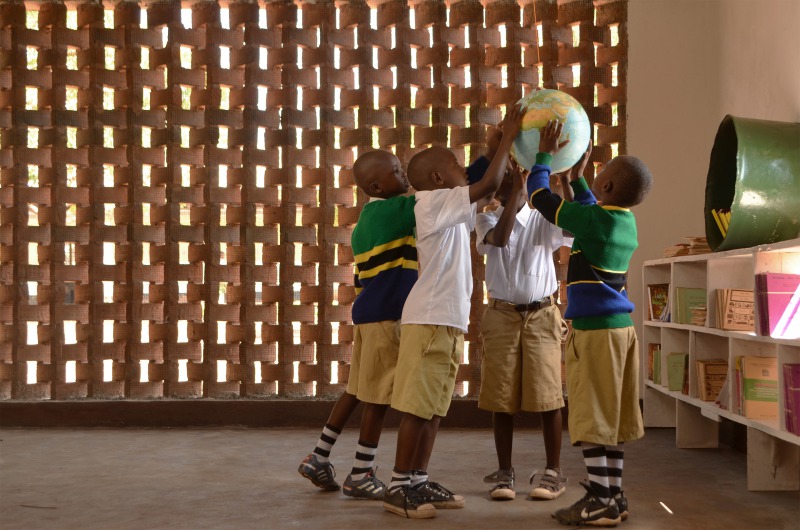 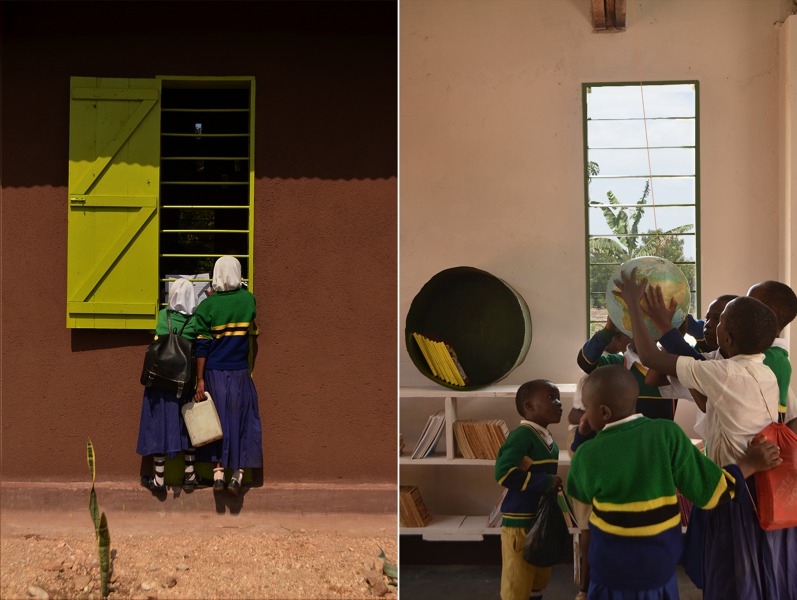 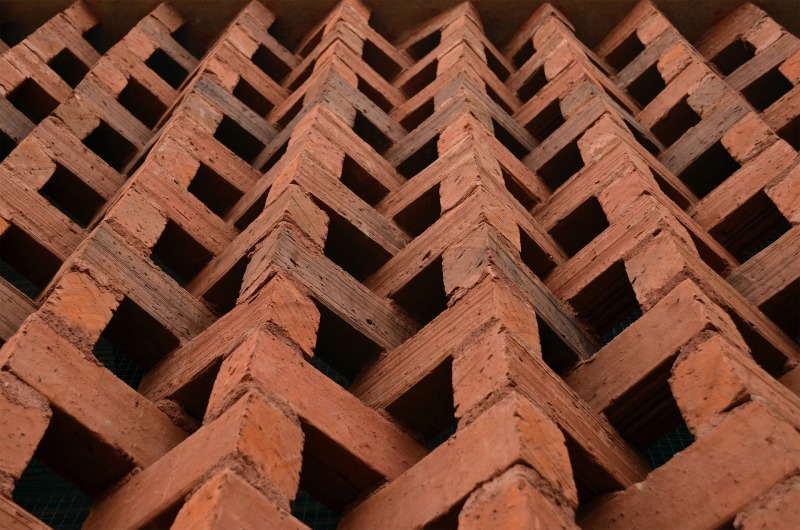 detail of the brick wall 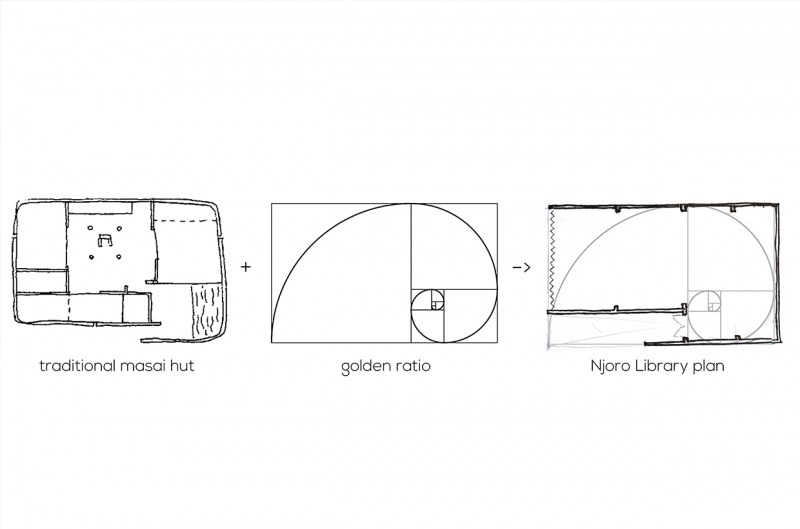 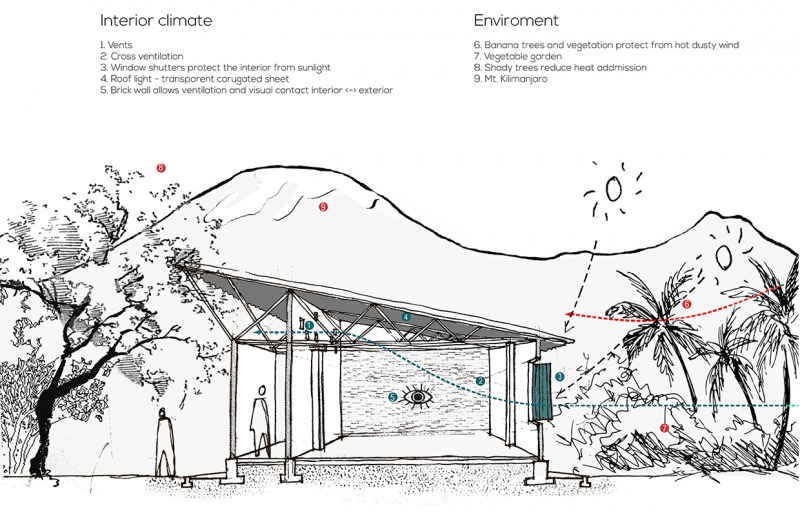