Despite its central urban location, the area of Grotão is connected with only one single road to the larger circulation systems of Sao Pãulo, effectively separating it from the formal city. Within this separated zone, increased erosion and dangerous mudslides have characterized the site as one of many primarily inaccessible high risk zones. As a result, the unfortunate but necessary removal of several damaged housing units has created a void in the otherwise dense fabric.

The new landscape generates the opportunity to transform the vacated space into a productive zone and public space through social design, a process of analyzing the conditions of rapid growth and improving marginalized settlements through social infrastructure. In addition to stabilizing the precarious ground and eliminating erosion, the terraced landscape transforms Grotão into a ‘natural arena’ that encourages diverse community participation. The intervention opens up the edges of the void to reconnect the divided urban fabric and to integrate it with an adaptable and flexible program. Localized moments of this program such as sports facilities, community center, agricultural production, market space, public space, transportation infrastructure, replacement housing, and a music school are simultaneously connected to all boundaries of the area by this landscape of activated terraces.

The lower zone of the site contains the Music School prototype, which vertically stacks several diverse programs to maximize site potential. These include the bus station/transportation infrastructure, community center, soccer pitch/sports facilities, and the Music School, which contains classrooms, group and individual practice rooms, recording studios, and performance halls. This new music factory is a vital catalyst in this area, expanding music programs into the favela while beginning to form a new network that serves the youth from all levels of society. It is an important space that gives community-driven orchestras sufficient rehearsal rooms and adequate performance areas.

The upper zone contains new replacement housing for those displaced from high risk zones. The building maintains both physical and visual connections within the area through a large open level that works as a continuation of the terrace system. Commercial spaces are also introduced on the first level as an economic vehicle that activates the street level.

The project proposes that architects eschew their conventional role in traditional hierarchies and instead serve as an enabling connection between the opposing forces of top-down planning and bottom-up initiatives. Acting to attract and create common ground for these two forces, architects can eliminate divisiveness and generate productive interactions. Here the priority becomes equipping this peripheral neighborhood with infrastructure, water, sewage networks, lighting, services, and public space in addition to other urban interventions, such as the improvement of social equipment in the areas of health, education, culture, and sports. The proposed urban model aims to translate into spatial solutions a society’s need for equal access to housing, employment, technology, services, education, and resources - fundamental rights for all city dwellers. 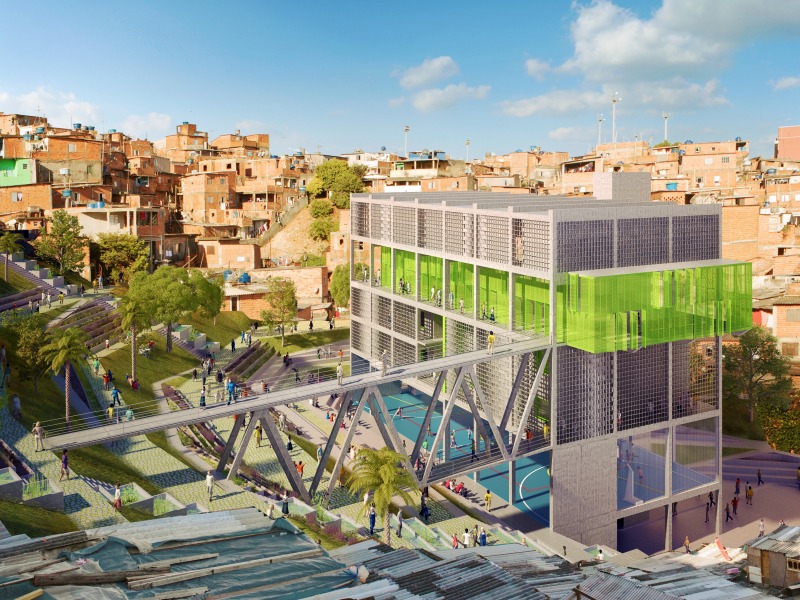