The Arturo Toscanini school in Brooklyn, New York, used to be an

The elementary school designed by WORKac architects is located in Brooklyn, New York, in a low-income district with very few open green spaces. It consists of a hybrid school typology combining traditional forms of education with the experience of food cultivation and preparation.

The aim of the Edible Schoolyard project is twofold; first, to make children familiar with the natural source of the food, by helping them participate in growing and harvesting it, and secondly, to teach them at an early stage that healthy eating is after all a lifestyle that is not a luxury, but a necessity if we want to live in a healthy and environmentally conscious society. Thus, the children become aware of the origins of food, and are educated with hands on experience, instead of a purely theoretical approach. Students are involved in all phases from the growing of raw food (production and cultivation) to preparing a meal.

The school garden is located on a former parking lot that belonged to the school. The concrete was dug up and replaced by a large amount of organic soil. The building and garden were mainly financed by capital funding through the borough and the city council. A considerable amount of money for staff and supplies was also raised through private donors and foundations.

The initiative began in 1996 when Alice Waters, an activist as well as chef and owner of a restaurant, decided to found the Edible Schoolyard (ESY) at the King Middle School in Berkeley, California. The NYC Edible Schoolyard official affiliate of the non-profit organization was formed in 2005 and collaborates with public schools in the city’s low-income areas to build, maintain and staff garden and kitchen classrooms on the school premises, following Water’s philosophy that schools should teach “eating, reading, writing and arithmetic” with food being an integrated element in the academic curriculum. The pupils can thus learn math, science, English and social studies while engaging in garden and kitchen activities.

The collaboration with WORKac architects started in 2008, as their own philosophy incorporates the ideals of ESY, where architecture and nature is combined to create a sustainable urban environment.

The aspiration of the project is to educate children about the benefits of locally harvested food. The reason behind this initiative is the increasing amount of obesity among children. Today nearly 50% of all pupils in New York City’s public elementary schools are overweight. Diseases such as diabetes, heart problems and high blood pressure are only a few of the risks this new generation has to overcome. Moreover, fresh food is often considered a luxury that low-income families cannot always afford. Therefore they settle for processed and unhealthy food, received from the supermarket shelf.

The project aims at having a positive impact on both the school and its pupils as well as on a neighbourhood level, in social and environmental terms. The garden receives many visitors from the district, some of which just pass through, while others volunteer regularly. The most amazing volunteer, according to Liza from the Edible Schoolyard Project is Joe, who graduated from PS 216 in the 1930s and recently turned 90. He no longer has his own garden and he decided to work a plot of land in the Edible Schoolyard garden and thus actively contributes to the project. Although the project is still quite new, the neighbourhood has already seen a great impact on the environment, due to the increase of pollinators in the garden.

In addition to participating in one of the community events organised every year, parents can also benefit from the project by simply helping out in the garden or by getting involved through a programme called "Pick Up and Get Cooking" in which they are invited to come in and cook the recipe their kids are making in class.

Teaching in the garden or a kitchen brings some unique challenges, since these spaces are less controlled environments compared to a typical classroom. Nevertheless, the project enjoys endless moments of joy and wonder with the students. Staff is particularly moved when hearing that a child now feels empowered to grow and cook, and that she or he is excited about eating healthfully. One very special moment that Liza was pleased to share occurred when, during the expansion phase of the project to a second school, the PS 7 in Harlem. The students from Harlem were brought to the Brooklyn school for a field trip where they got to do a gardening and a cooking lesson. One of the mothers who was chaperoning looked at her son happily eating the kale he had cooked, and she was overcome because she had never seen him eat anything green before.

The architectural concept of the school not only aims to express the different functions on the façade, but also to make a connection among them in a way that the students can easily recognize the different activities that take place in the interior. As Dan Wood by WORKac mentions “the building itself is a teaching tool”.

The three defined entities of the school comprise the bright blue playful volumes of the System’s wall, the multi-coloured and more introvert Kitchen classroom, and finally the transparent mobile greenhouse that allows for year-round food production.
The main entrance is located on the System’s wall side, where one can also find a cistern where rainwater is collected to irrigate the garden of the school, a space for composting organic waste, solar batteries, dishwashing facilities, a tool shed and a chicken coop. In direct connection with the System’s wall and at the heart of the school is the Kitchen classroom that can accommodate up to thirty students. There, the students can prepare their meals. Finally, the mobile Greenhouse extends the growing season by covering 150 square meters of soil in colder months and sliding away in the spring, over the Kitchen classroom.

The Systems Wall condenses all of the building’s systems into one zone to make visible both site-wide and building-specific systems. The building’s shape is designed to maximize the collection of rainwater, which is used to irrigate the garden, by aligning the roof angles over the greenhouse and the kitchen classroom. The System’s wall is covered in a bright blue rubber coating and attracts the children’s curiosity about the sustainable systems that support the building and the garden. Rainwater is collected in a cistern within the curved portion of the Systems Wall, where additional volumes enclose a tool shed as well as a restroom and A/C units atop the largest volume within the wall, which also forms the entrance to the building.

The colours and textures were carefully chosen to stimulate the children’s creativity and attention. The most articulated volume, the one of the Kitchen classroom, is clad in fibre cement shingles painted to look like giant flowers punctured with porthole windows at the centre. The flower pattern of the main volume was inspired by the famous post-modern building of the BEST products showroom, designed in the 1970s by Venturi and Scott-Brown.
The circular skylights at the centre of the flowers allow the light to come in the kitchen classroom, creating a pleasant atmosphere in the colourful interior. The children are introduced to sustainable practices of recycling and reuse, as the kitchen is equipped with compost bins and a waste-recycling station.

Simple and cost-efficient architectural solutions were chosen in order to enhance the character of the project. The translucent volume of the greenhouse is a simple structure made of polycarbonate and aluminium. The possibility of the greenhouse volume to ‘disappear’ as it slides over the roof of the Kitchen classroom, adds an element of seasonal sequence in the concept of the school, while the visual interaction with the greenhouse is possible through the portholes that allow to get a glimpse from the classroom.

The program of the school arranges that all 625 students take four classes per month in the Edible Schoolyard and divide their time between the garden and the Kitchen classroom, where all of the equipment is designed to create the feeling of a cooking space at home. The lush garden is anchored with a 5 square meters open-air pavilion where students gather at the beginning of each class to learn about the lesson of the day. They spend the rest of the period gardening outside, except on rainy days, when they work in a semi-circular station with a plastic cover. The garden and kitchen classes are aligned with the common curriculum of the students and integrated into a typical school day. 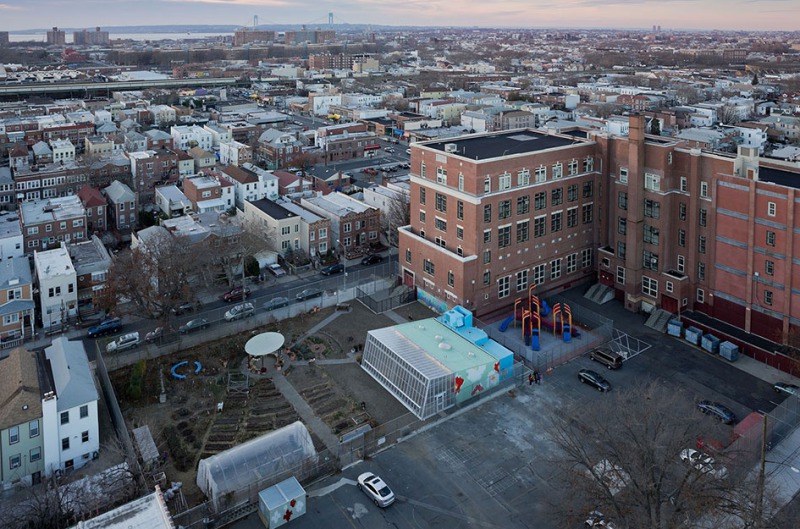 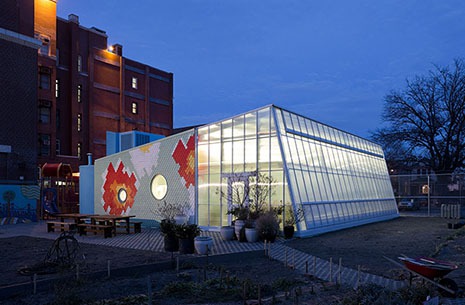 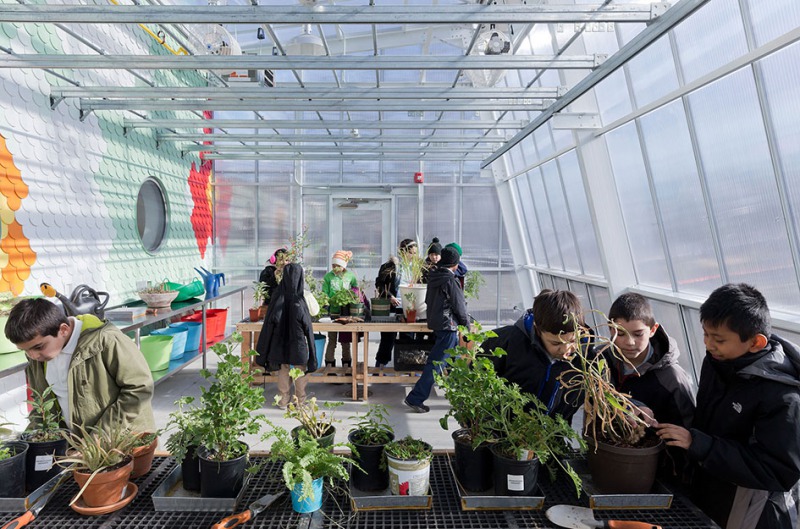 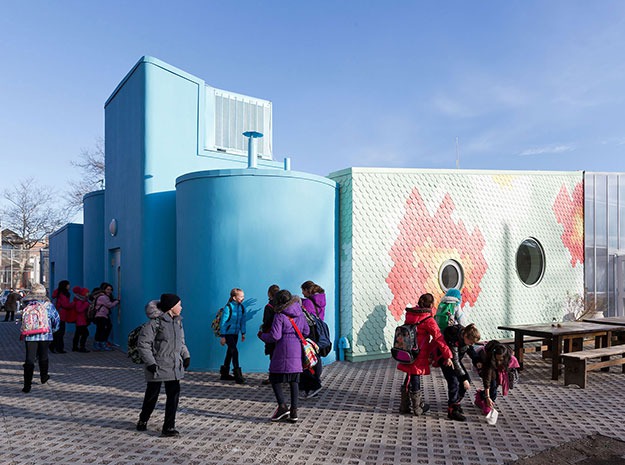 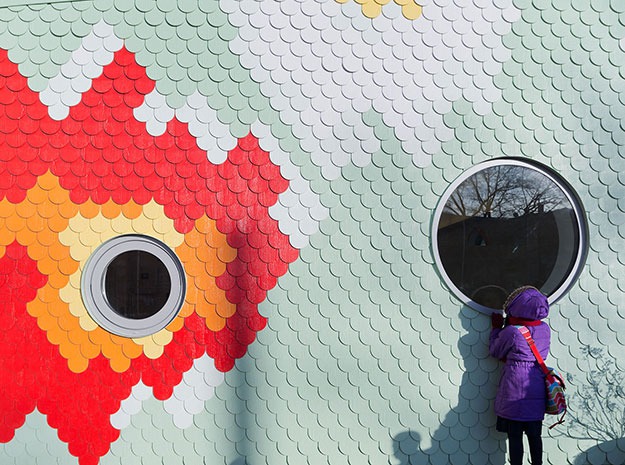 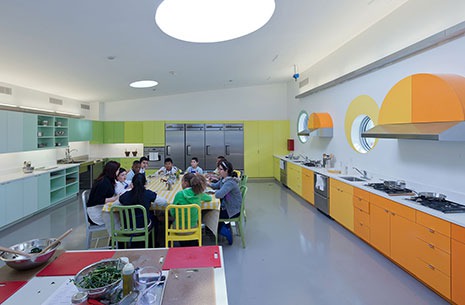 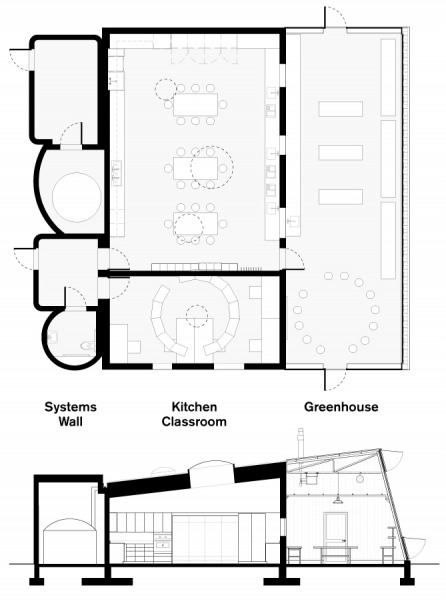