A former luxury hotel, currently a vertical slum which is occupi

The Grande Hotel Beira was once a luxurious hotel in Beira, Mozambique. It was opened as a hotel from 1954. It served until 1963 as the ‘Pride of Africa’, after that it became a ‘white elephant’. During the Mozambican civil war, the hotel became a military base and served later on as a refugee camp. Today it is a vertical slum which is squatted by proximally 1077 inhabitants. They have to live under poverty and under bad hygienic conditions. Most of the interior and additive construction materials is stripped off the building to generate income for primary daily survival. One example is that the water, sewer and electricity system is completely removed in exchange for food and water. The parquet floor is used as fuel for cooking.

The prestigious Grande Hotel was built between 1953 and 1955 by architect Fransico de Castro. The concept design is of architect José Porto who was related to the Gabinete de Urbanização Colonial in Lisbon, Portugal. The project was intended to celebrate the success of the Portuguese fascistic regime of the Estado Novo in Beira. The goal was to establish a luxury accommodation for business partners, influential persons and wealthy tourists which had to come mainly from Rhodesia, South Africa and the Portuguese colonial empire. The hotel consisted the finest, most luxurious and most modern materials. The total construction costs went three times over budget. This was worth for the client Arthur Brandão, a high influential person within the regime. With 116 hotel rooms and a floor surface of 21,000 m² it could never became profitable, even with the most prosperous estimations. The expected tourist never came to the industrial harbor city of Beira, they preferred the Krügerpark, Victoria Falls and the Bazaruto archipelago. The Grande Hotel was from 1954 until 1963 in full operation. After the closing in 1963 remained the Olympic swimming pool in the garden remained open for the neighborhood. The hotel itself was only used as conference centre and for large parties. Some people argue that the reason of failure was that it could not obtain a casino license. The regime believed that it was not moral to have places of gabling in his African colonies. Because of that the client of the Grande Hotel was a high influential person within the regime, the story of the casino could be considered as a myth.

The original construction of the Grande Hotel is based on the Five Principles of Modern Architecture of Le Corbusier. The floors and the columns are made of in-situ reinforced concrete. The façade is partly made by in-situ concrete and is predominantly not-load bearing. The internal division is made by hollow bricks which where plastered. Today, most of the additive construction materials, such as the wooden finishing, are removed for sell or used as fuel. Only the main supporting construction and the internal space divisions are remained. The additive in-built shelters are made by simple and semi-temporary building techniques, similar to the vernacular informal shelter building techniques in urban Mozambique using thatched mats, sink roof sheets, cement bricks and wood. There is no internal water, (rain) water drainage, sewerage, electricity and ventilation system anymore. Water is supplied by a single water pump which is private owned and paid. The other water resource is rain water collection and the highly polluted former swimming pool in the garden. The beach and the edge of the small park next to the hotel is currently used as public sanitation.

The biggest climatic issue in the Grande Hotel is the ventilation. The original ventilation system is not working properly anymore due to the additions and removals which took place. The ventilation in the original design was managed by natural ventilation by the open galleries and window frames with shutters. In each hotel room was there a fan on the ceiling. The windows are now not covered with glass but by planks or other solid materials. The overcrowding by large families is causing a serious cooling problem. Overheating occurs especially during the hot nights with high humidity. People are forced to sleep on the open collective galleries or outside the Grande Hotel, encouraging the occurrence of robbery and thievery. 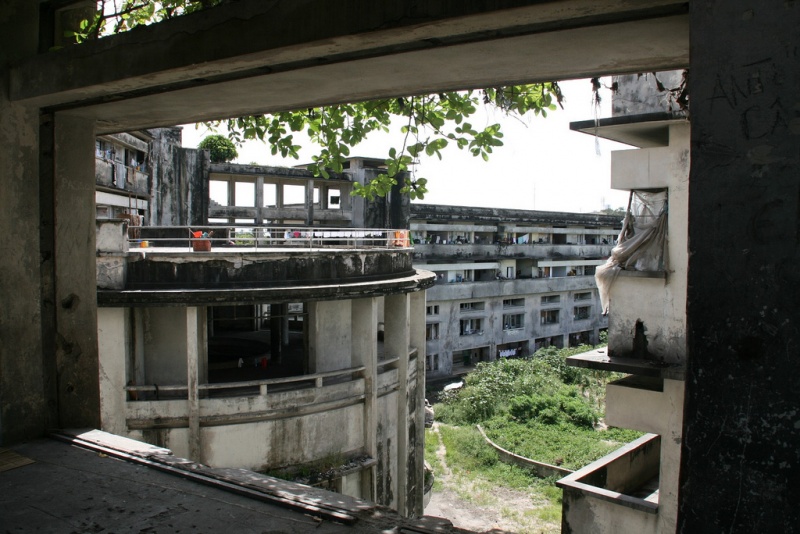 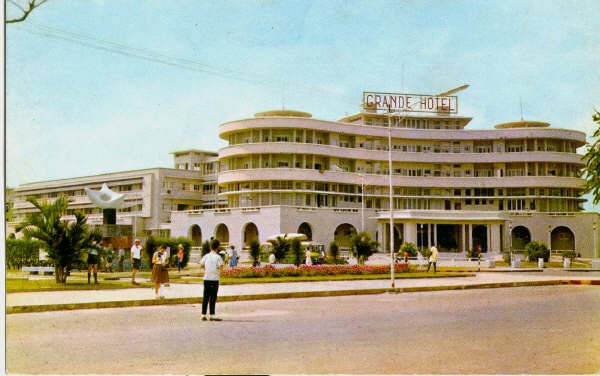 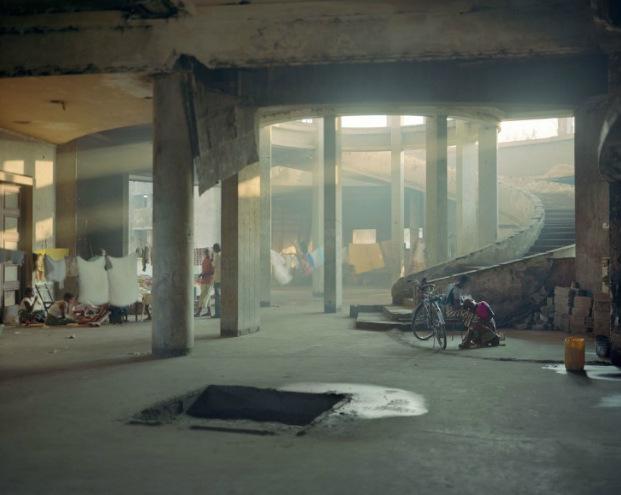 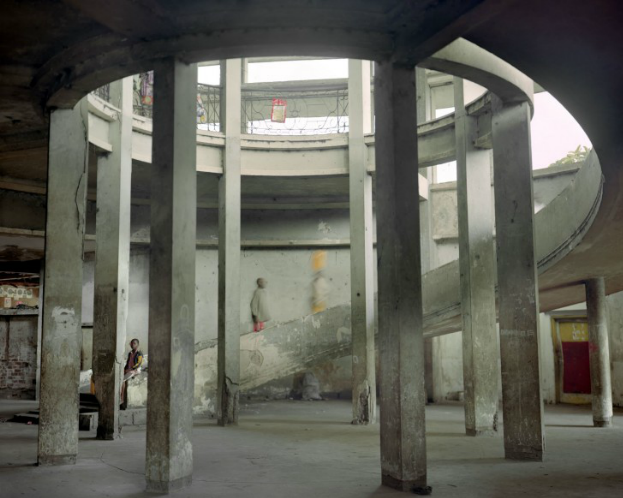 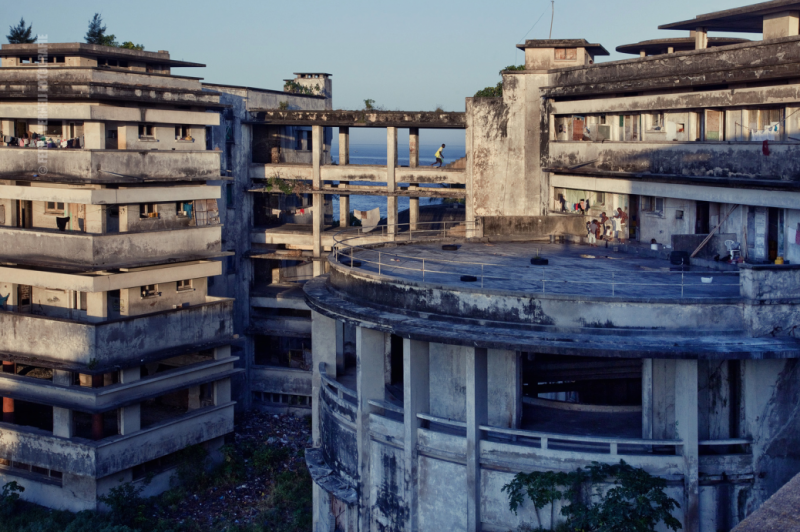 Sunrise over the awaking Grande Hotel 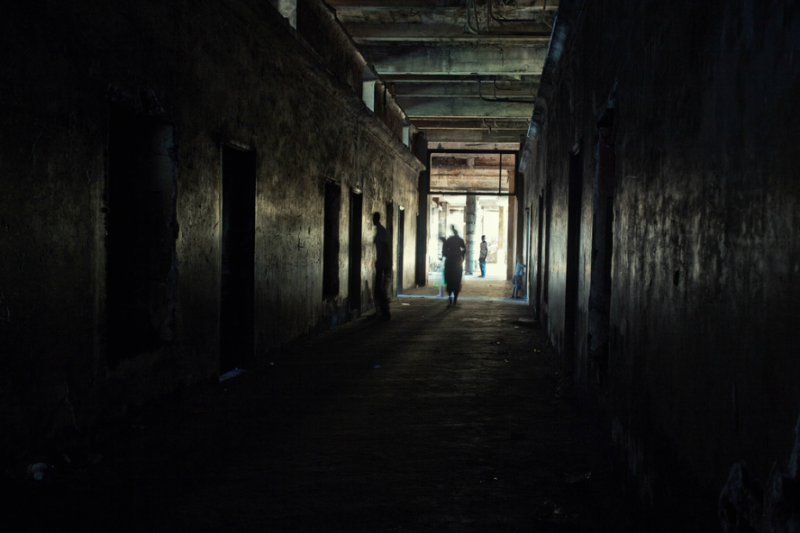 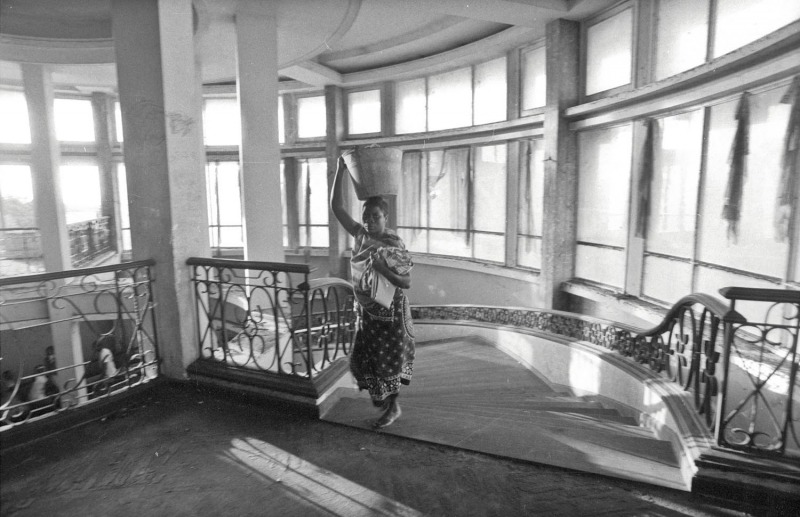 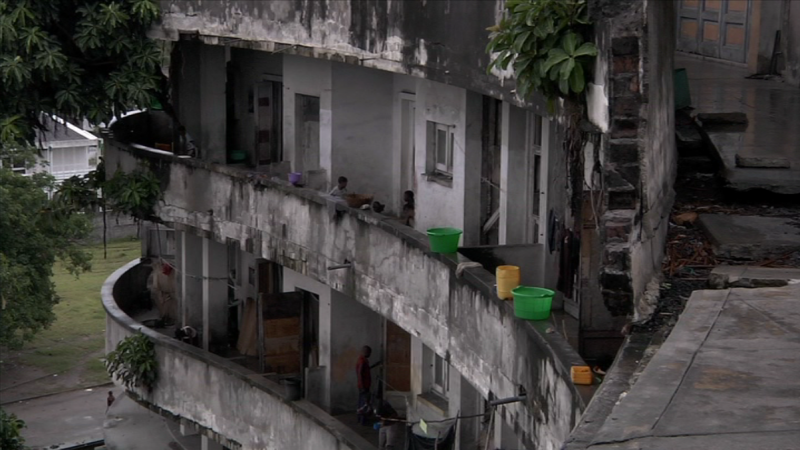 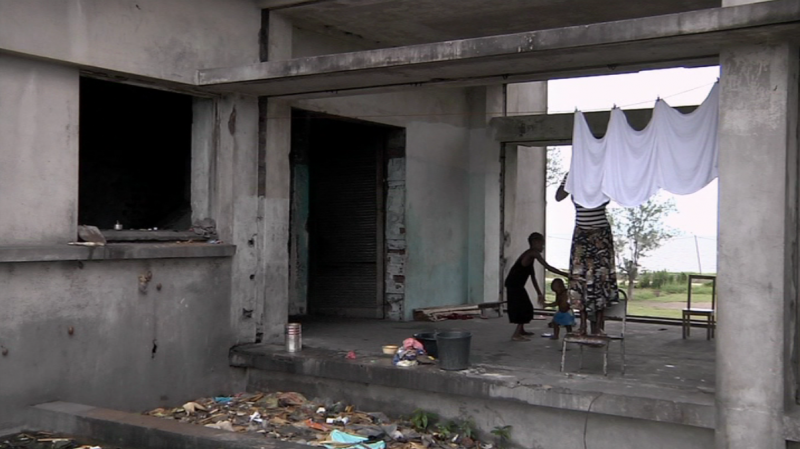 Wash drying above the rubbish 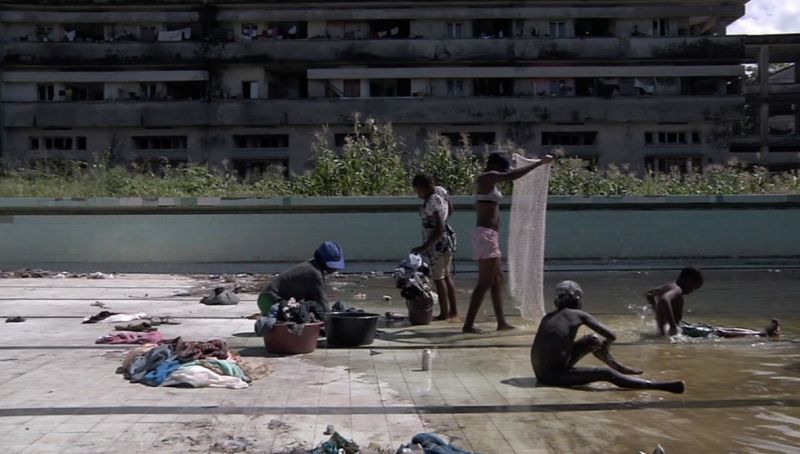 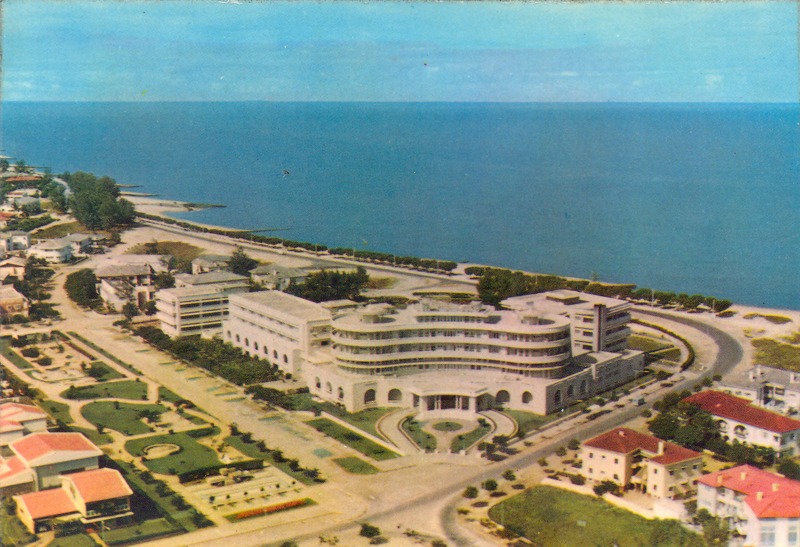 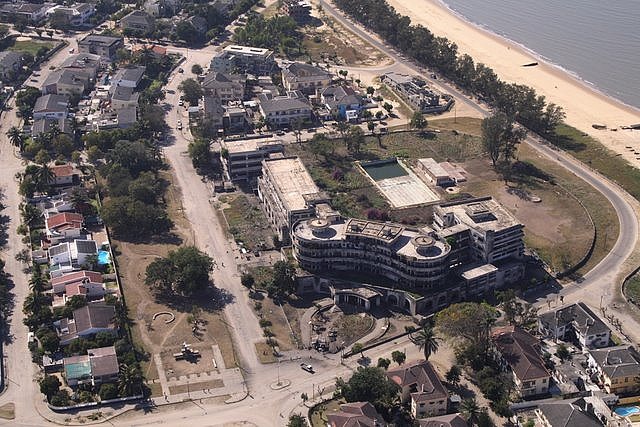 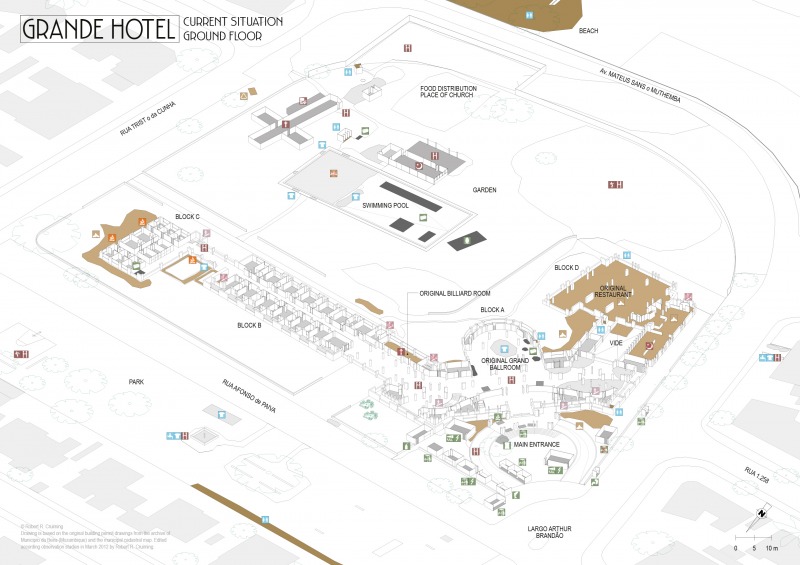 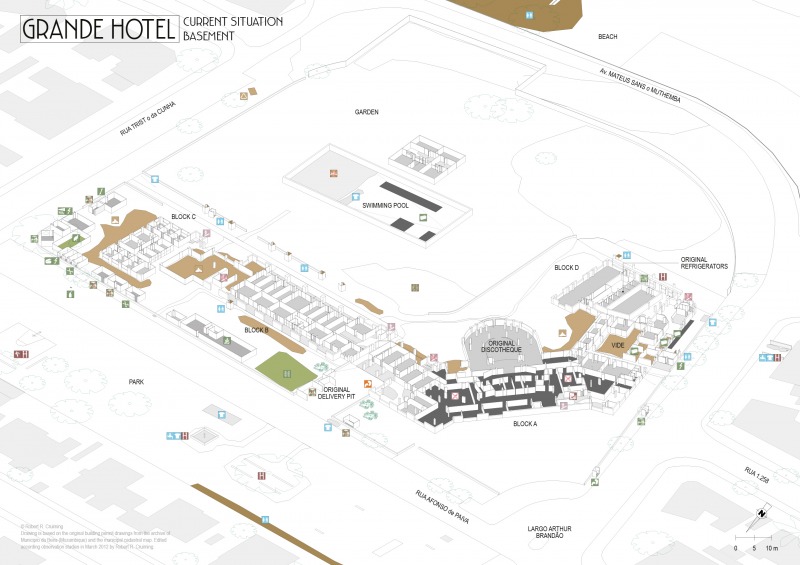 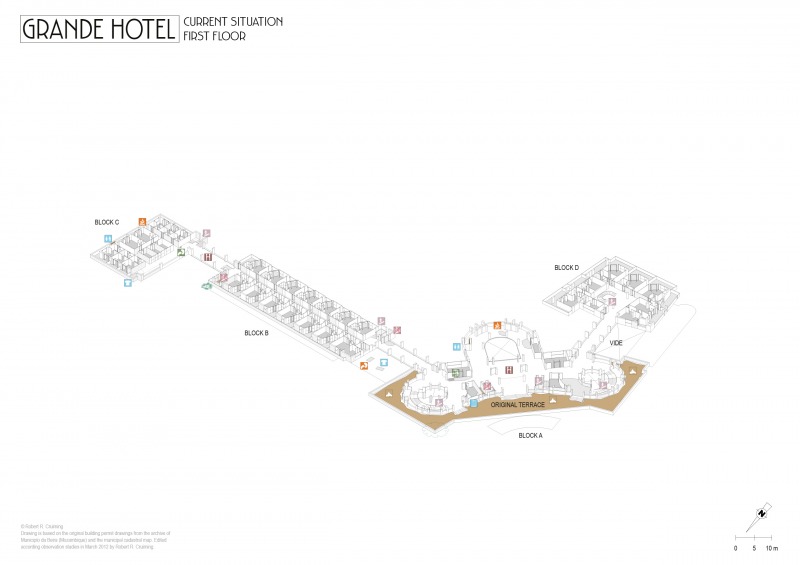 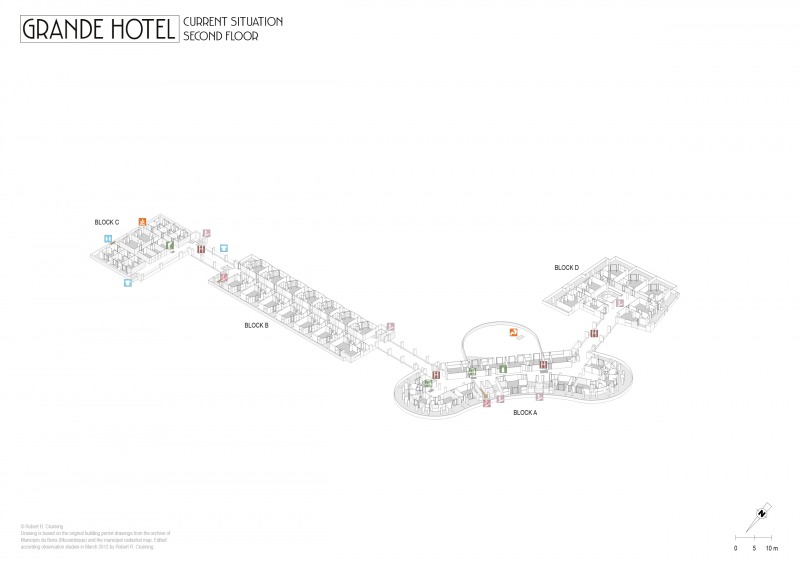 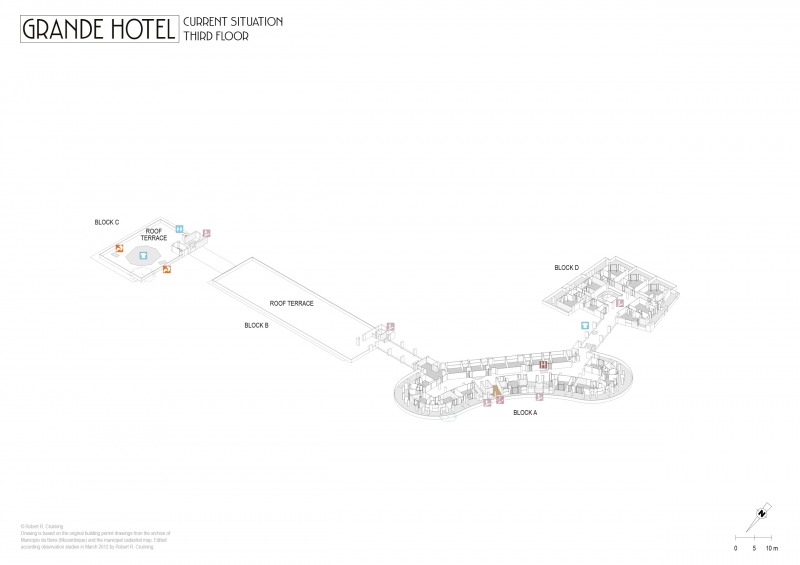 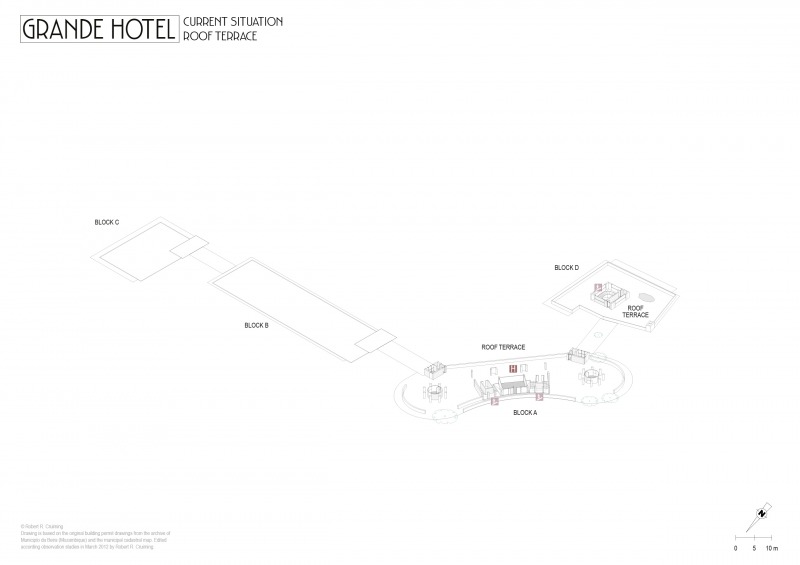 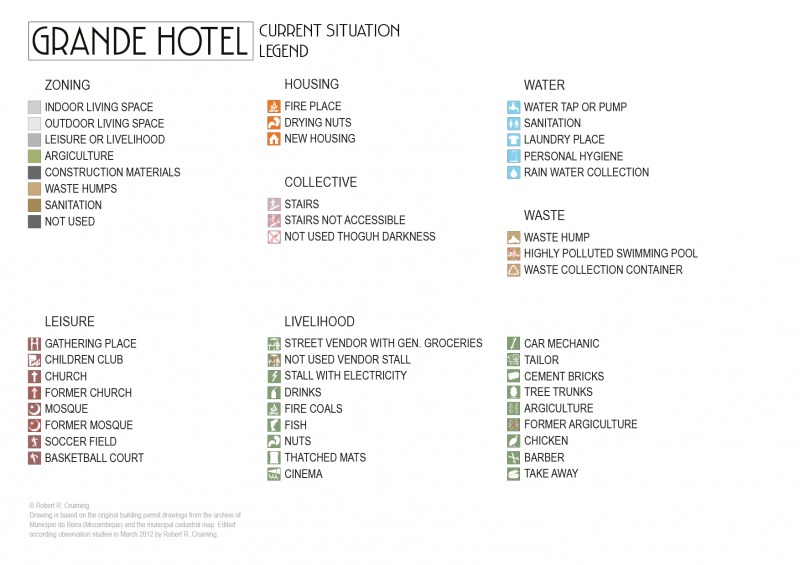