By looking at how architects could play a significant role in helping people improve their housing without taking away their agency, the architectural group ELEMENTAL, in conjunction with the Chilean government, has contributed significantly to the discourse of social housing. A project called Quinta Monroy in Iquique, Chile explored the question of how to provide a basic quality house, for only $7,500. Their answer was to provide half of the house. And if only half, which half would it be?

While some of the units have not changed since families moved into them, most of them have seen some level of change and adaptation. The evolution of three home are described below (as of 2008).

Since the upper units don’t come with a bedroom, just an open two story space (and the bathroom), Ana added a floor for a bedroom upstairs in 2005. After that, they removed the stairs from the original section and added the floors in the slack space. The leftover space of the original stairs provided more closet space, and the resulting three bedrooms allowed a room for each person.
In 2007, with the assistance of her mother, Ana added a room onto the back of her house on her main floor, right above her mother’s patio area. The floor of this addition sat on the roof of her mother’s new addition. Ana could pull this off because she knew her mom would agree to it. Most restrictions stipulate that those living above can’t add onto the second story of the house, but can add a balcony on the third story. This is mainly to reduce conflicts among neighbors. However, some neighbors have agreed in writing and worked together to add multiple story additions on the back of their homes.
Right now, Ana leases the store out, which supplements her work as a domestic servant in Iquique. She hopes to eventually run the store herself one day, but can’t afford to right now.

Ana’s mother (who lives below her) has customized her space in really attractive ways. She lives there with her husband and brother. She enclosed two rooms as bedrooms. Her brother ended up moving in with her in a room added onto the back. She brought her kitchen with her from Santiago. She added a wall at the front to serve as a sort of foyer because she could see the bathroom from the front door. On the outside, she painted her three bays all the same color, clearly denoting her space and adding a visual layering most typically done by architects. 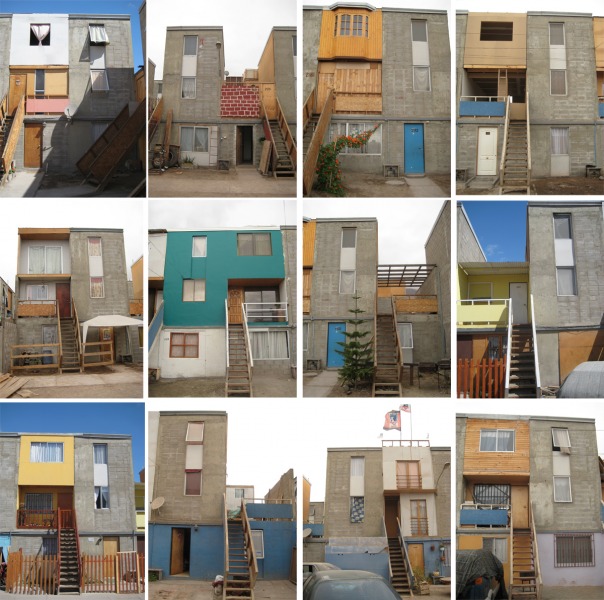