Re-connects to the ancient culture.

During the 1970s, as a reaction to the destruction of South African indigenous settlements under apartheid, Peter Rich [1] and his team researched and documented the traditional rural settlements of the southern ama-Ndebele. After 1994, the establishment of democracy allowed Peter Rich to engage with a series of important cultural heritage projects. All of these projects were funded by the South African government, using Cultural tourism initiatives to battle poverty and heal the deep wounds of apartheid.

In 2005, the South African National Parks (SANParks) held an invited design competition for an Interpretation Centre. The requirements of the competition demanded an extensive programme of exhibition spaces that would accommodate the historical artefacts of the Mapungubwe Kingdom, interpretive areas for the cultural and natural significance of the park, headquarters for the park staff, and amenities for visiting tourists. But the agenda of the competition took a step further, to engage the local population with the realisation of the project, in an effort to create employment positions and inject money and skills to the local community. The winning proposal by Peter Rich Architects, Michael Ramage and John Ochsendorf responded to these requirements with a labour-intensive design that employed local people for a year making tiles on site from the surrounding earth.

One of the primary architectural references for the form of the building was the cairn, a manmade stone structure that has often been used in Zimbabwe as a demarcation of a route. The vaults convey a symbolic character of a sacred space where the light penetrates the occulus –the circle hole on top of the vault- and opens the building visually towards the sky. The basic element of the building is the integration with the landscape with the broader definition of the word, which embraces the cultural landscape, the natural hilly and rough landscape of Mapunqubwe, and finally the historical landscape. All of the above interact to create an inextricable unity.

According to the architect “we turned to nature for inspiration, for reasons of economy, certainly not for aesthetics”. But this project reveals much more than a struggle to create Architecture that respects the genius loci. It reveals an architect that is also a thinker and sends a message that the role of the architect has always been and should be multiple; to serve those in need, to respect the environment and to be an activist, if one wants to regain the lost ground.

Mapunqubwe is located at the confluence of the Shashe and Limpopo rivers, south of Great Zimbabwe. Around the 13th-14th century the area has been a significant place where gold production and trade was taking place. The area remained uninhabited for 7 centuries before it was discovered in 1933.

According to archaeologists, the society system of the Kingdom of Mapunqubwe is thought to have been the most complex one in South Africa, and it was also the first example of a hierarchy development based in social classes, where the king would inhabit the top of the hill and the lower classes would settle in the valley.

Since 2003 Mapungubwe has been declared a World Heritage Site by Unesco. Despite that fact, the place has been constantly violated by power stations and open cast coal mining activities, which destroy the richness of the natural and cultural heritage it now possesses. In addition to that, high rates of unemployment and poverty is what the apartheid government left the area of Mapungubwe with.

The introduction of the poverty-relief program on behalf of the SANParks organization managed to engage actively the local population. The labor intensive construction involved extensive skills training which has had a positive impact on the socio- economics of the local area, consistent with government strategies for targeting development to local communities. The government-funded poverty reduction program employed 60 people to make tiles for a year. Constructing the vaults trained over 100 people and employed 10-40 people at any one time over the course of 8 months. 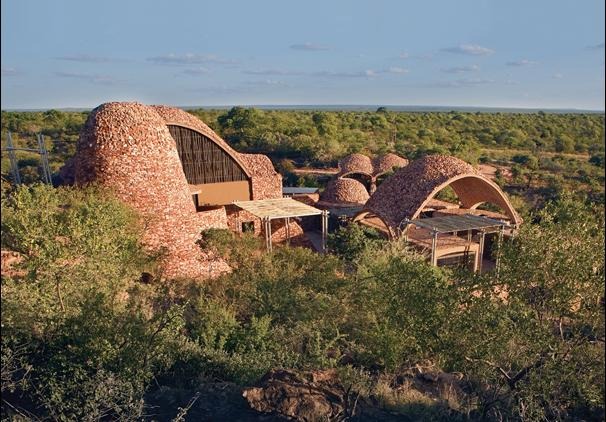 The interpretation centre forms part of the landscape 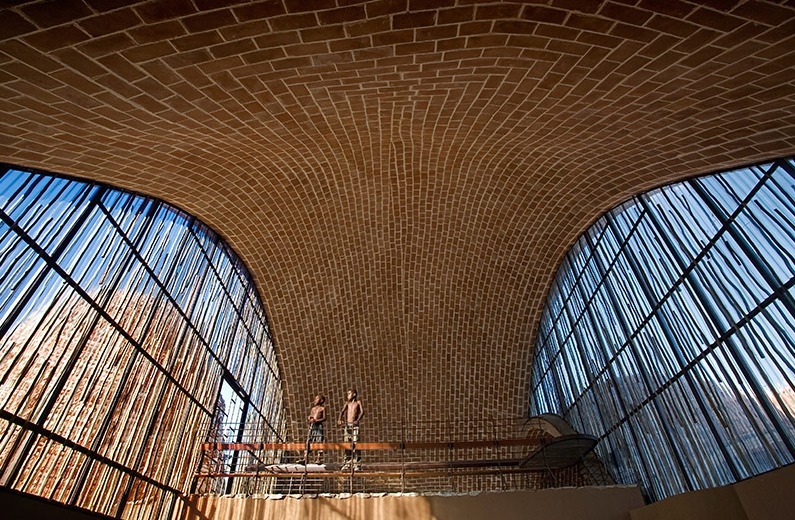 Interior view of the vault

The Mapungubwe Interpretive Centre in South Africa uses novel design and construction techniques to allow local materials and labour to be used in production. The building is constructed adapting elements of Mediterranean architecture in a structural and symbolic way that respects the African climate. More specifically, the construction of the vaults uses a 700-year old Mediterranean tradition that was adapted for the southern African context. This ancient building method is being reintroduced as part of the building’s identity.

The typical constraints of time and budget were multiplied with the high price of steel, making the architects almost eliminate this material when possible. This led to the choice of local materials and the active participation and training of local people to work under the poverty relief program. As a result, the design took these limitations into account. Therefore, minimal formwork and no steel reinforcement were used for the vault shaped roofs.

At the same time a sustainable solution is achieved, not only because of the low impact that the construction of the building had on the environment, but also in a social level. This action gave the opportunity to the local workers to familiarize with that traditional method since they were used to working with more contemporary construction techniques.

Common and cheap materials were used with a simple but sophisticated way, as Paul Finch successfully noted in his interview about the jury who awarded the building in the WAF in 2009 [2]. The majority of the materials come also from the local environment and enhance the identity of the building. Soil cement tiles were locally produced by the indigenous people, roughly shaped stones for the cladding of the domes and the construction of walls, and finally reeds to cover the semi-open spaces and provide the necessary shade in the hot climate of Mapungubwe. 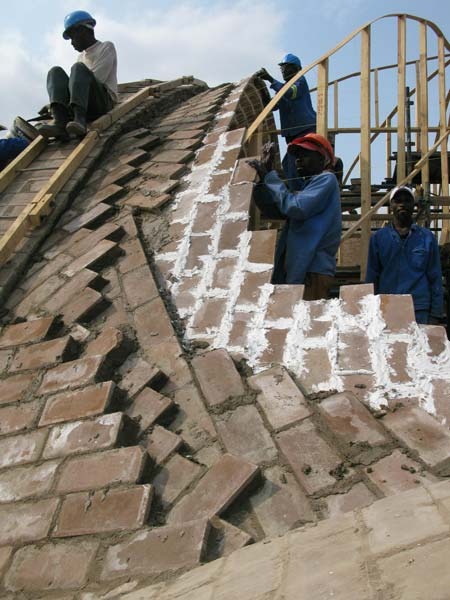 the construction of the vault

image: WAF | © all rights reserved
i 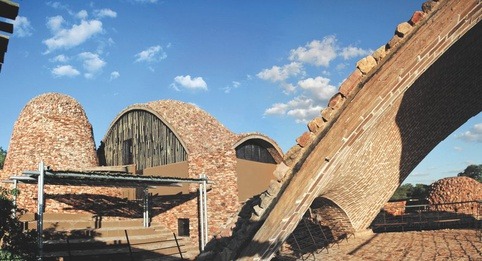 The building has also won the brick award launched by Wienerberger 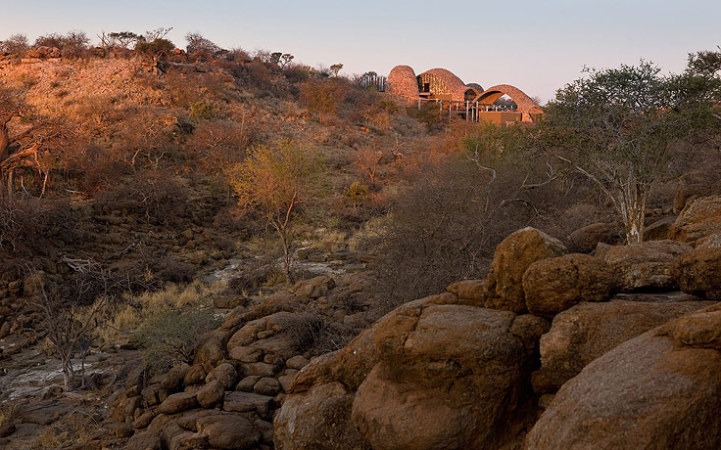 A distant view with the stunning landscape 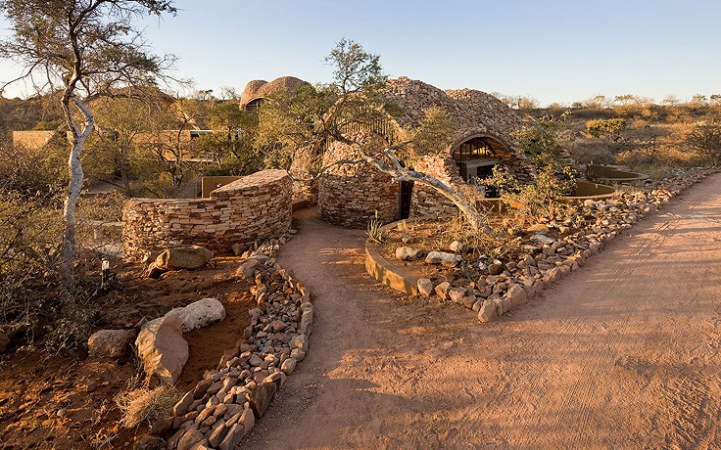 Overview of the site and its surrounding landscape 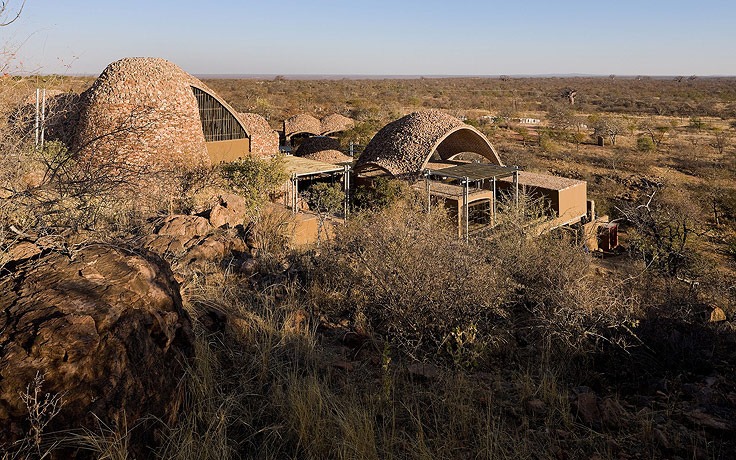 Overview of the site 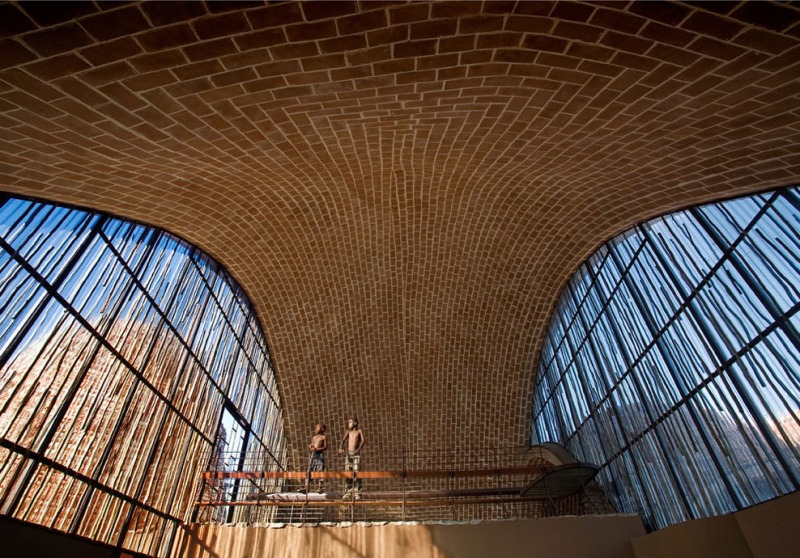 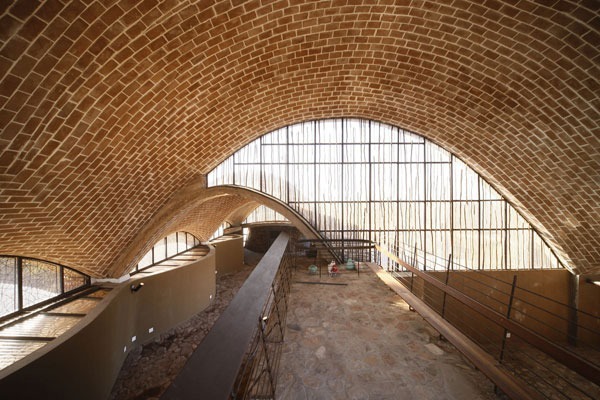 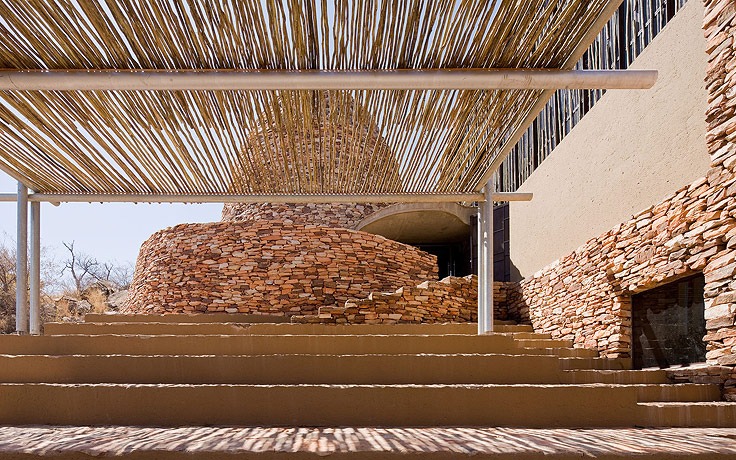 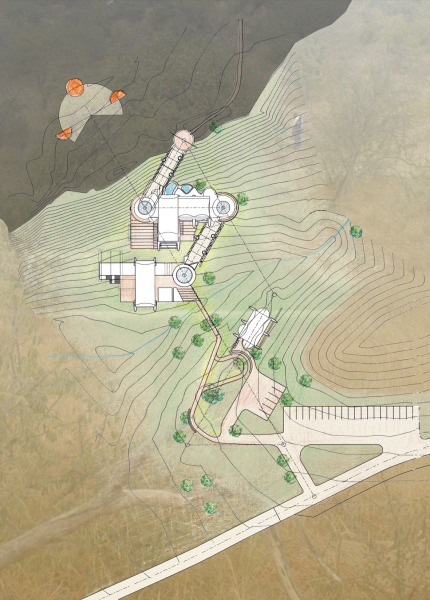 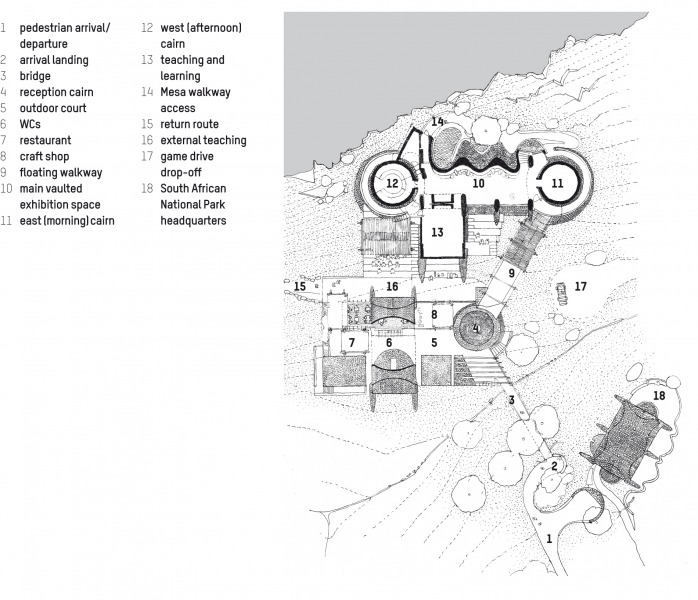