projects
experts
Submit a Challenge
Submit an Inspiration
About Architecture-in-Development
Our team
Our steering committee
Subscribe our newsletter
What's going on
Contact us
Register
Login
"After the rain comes..."
Msitu wa Tembo, Tanzania
Written by:
Alberto Piccioli
follow
share on:

House built with local affordable materials in an innovative way

This house was designed and built by students of architecture (Seher Çaktı & Ellen Cleemput) in collaboration with C-re-aid, the beneficiary family, a local partner organization and local craftsmen. The project had to face the challenges of poverty, lack of hygiene and security, a complex social situation and vulnerability to floods and droughts. The students were able to realize a unique project within a short time frame, by using local materials and the traditional grass roof technique, combining them in innovative ways.

The beneficiary family was introduced to C-re-aid by the partner organization TATU Project. The man of the family had recently died and the old woman was left behind with her daughter, who has down-syndrome, and her grand daugther. Security was very important for this family, especially due to the fact that the daughter had been raped a few years earlier. C-re-aid then decided to built a new house for these vulnerable women. Another important factor for this family was hygiene, as the daughter has difficulties to take care of herself. The students designed a house with a big sleeping room, as this family will very likely stay together and might need larger space for the future, a shower room for privacy and improved hygienic conditions, and a porch as outdoor living room, a typical feature in Swahili culture.

As regards the area in which the project is located, it is important to notice the particular conditions that led to conflict amongst the residents. In fact, many migrants working in the nearby TPC sugar plantation started claiming land, while before – until around 50 years ago – the whole area was open and freely accessible to the different populations inhabiting the region. Particularly, there were conflicts with the Maasai people who claim that the land had always been theirs to graze the cattle; for this reason, they would open the gates and let the cattle into fenced properties, which explains why many houses have fences and the residents fear intrusions from the Maasai. The grandmother herself moved there seventeen years ago and bought the land where the house is standing for about 65'000 schillings (currently, around US$ 36). The specific aggression that happened to the daughter with down sindrome also increased the family's fear of outsiders.

For the first time in a C-re-aid project, the students decided to built a house with a local thatched roof, made of grasses. It was a challenge to built such a roof in a sustainable way, but it turned out to be a good choice as in this semi-arid area a corrugated steel roof would over-heat the indoor space and turn the house into an oven. The three rooms are lined up in order to facilitate an easier roof structure. The walls are built with local fired-bricks, smoothened before use to reduce the amount of mortar needed and therefore keep the budget as low as possible. Such bricks are locally available, cheap, relatively durable and thermally insulating. A reinforced concrete lintel on top of the wall provides a structural brace for the whole house and the base for the roof. The foundation was realized by laying bigger stones and gravel, finished with concrete; the house is on an elevated basement to help prevent damages during the rainy season. 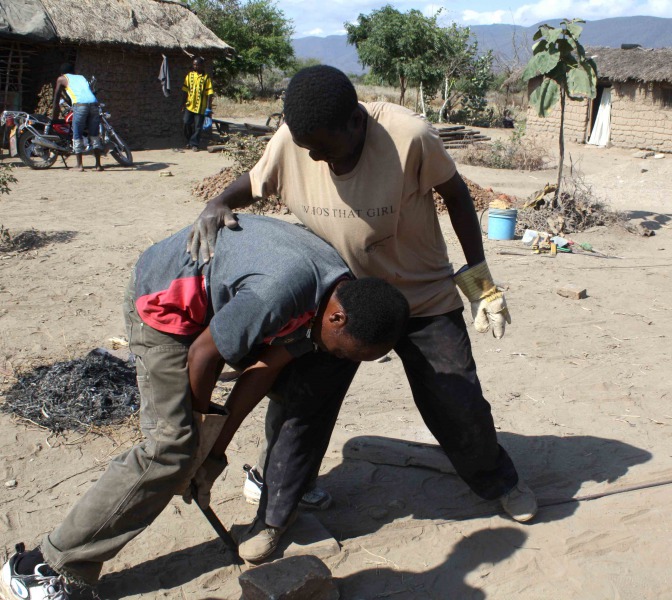 Manual bending of the iron bars 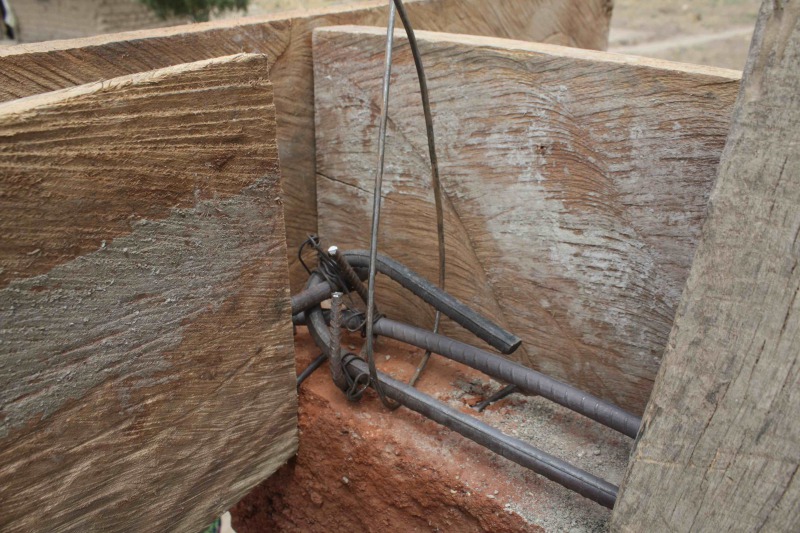 Detail of the lintel corner 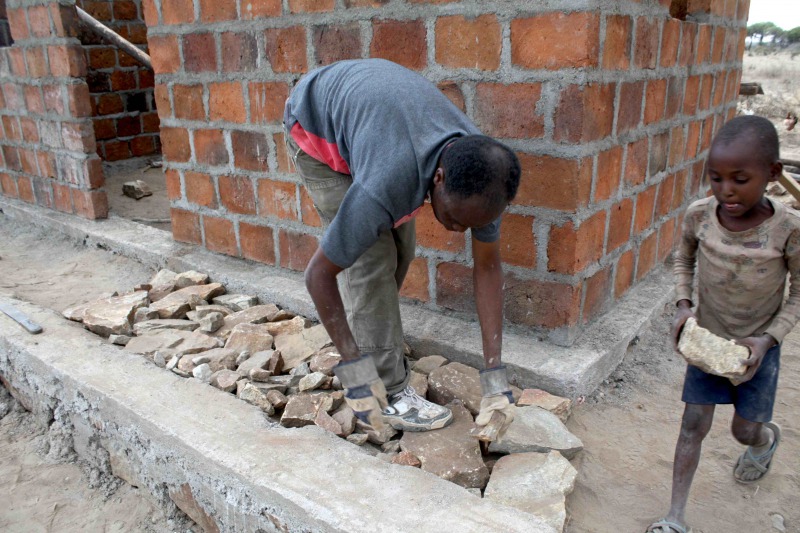 Laying the stones for the floor 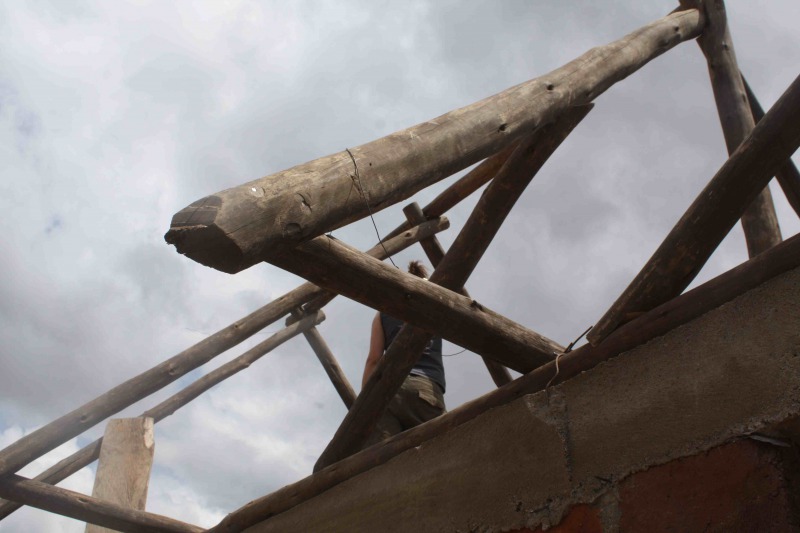 Detail of the roof structure under construction

The semi-arid region where Msitu wa Tembo is located presents a major climatic challenge for the populations living there, combining the hardships of waling long distances to fetch water to that of flash-flooding during the rainy season. This phenomenon is due to the composition of the soil and the great amount of water that flows through the valley from the nearby mountains. The vulnerability to droughts and floods is a great element affecting the resilience to poverty of the local families. 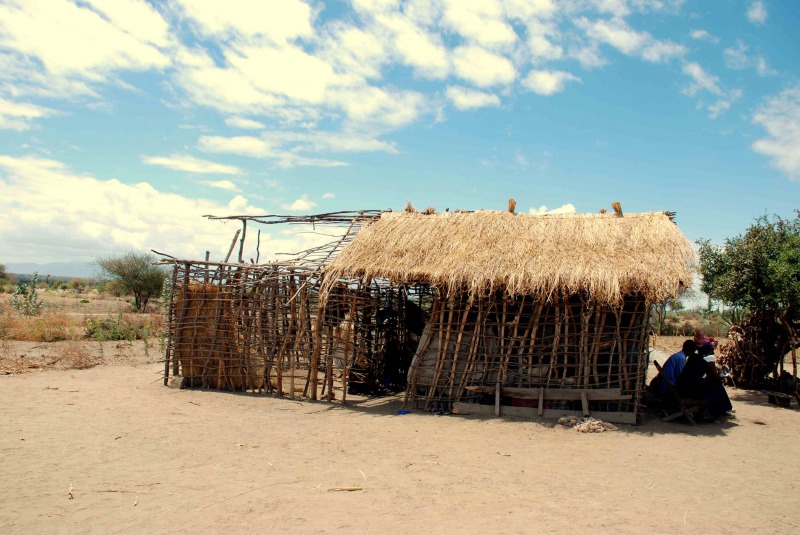 The old house made of sticks and grasses 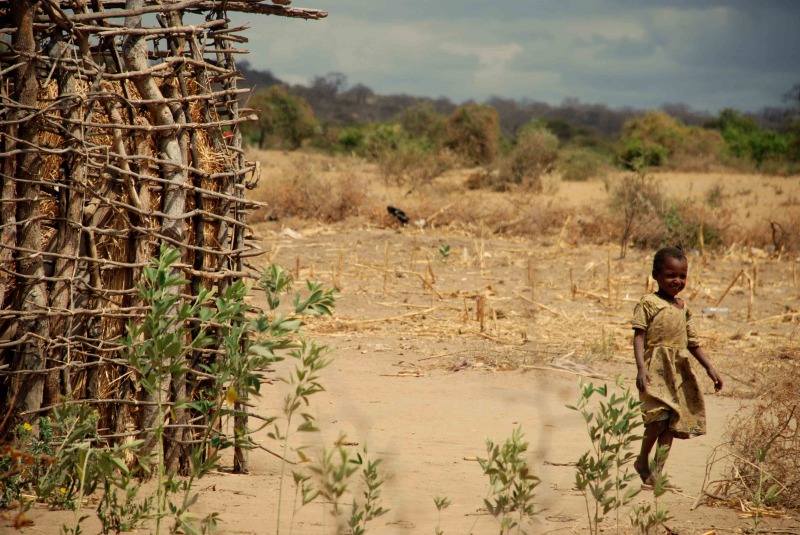 The granddaughter Johanny near the old house 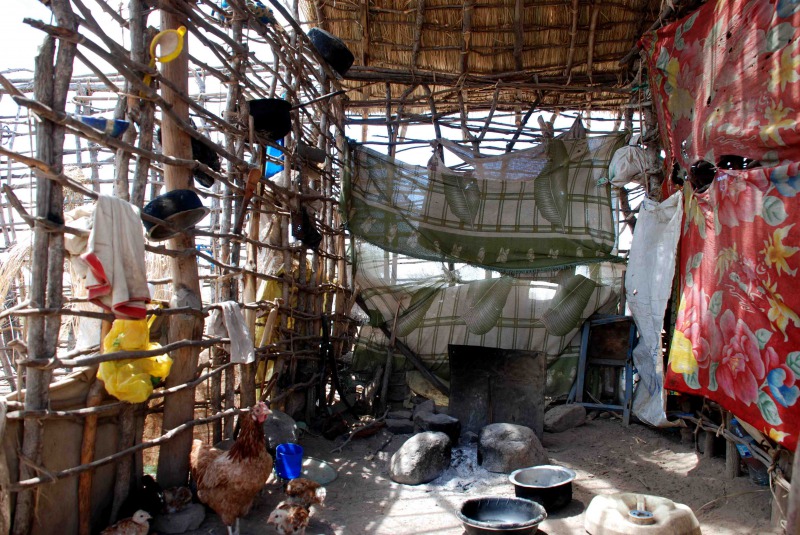 The kitchen in the old house 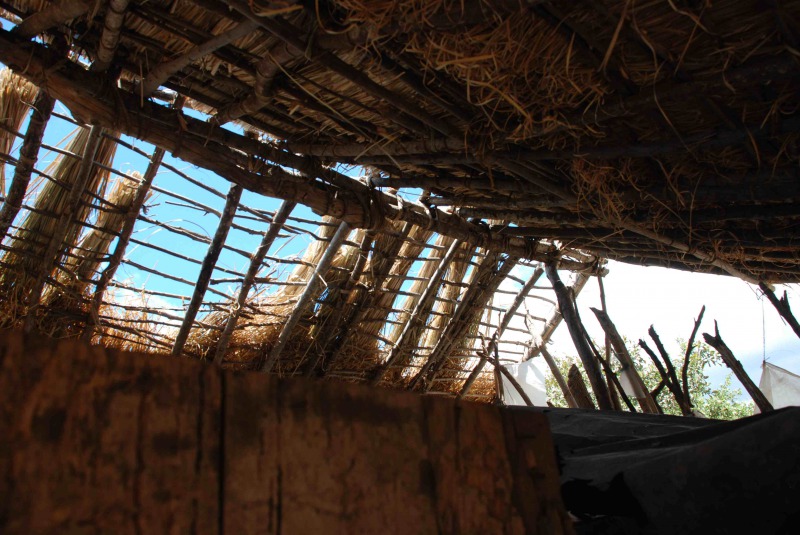 The old roof in poor conditions 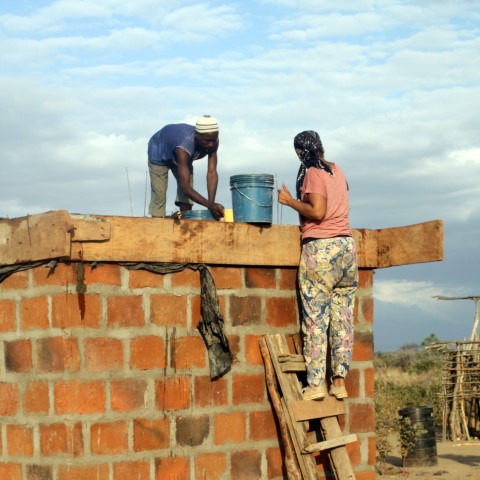 The lintel under construction 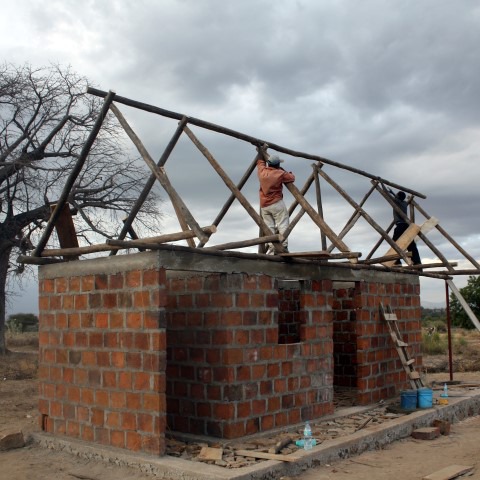 Main structure of the roof 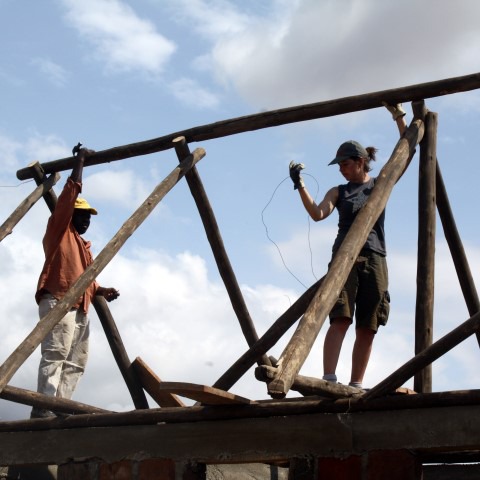 Working on the roof 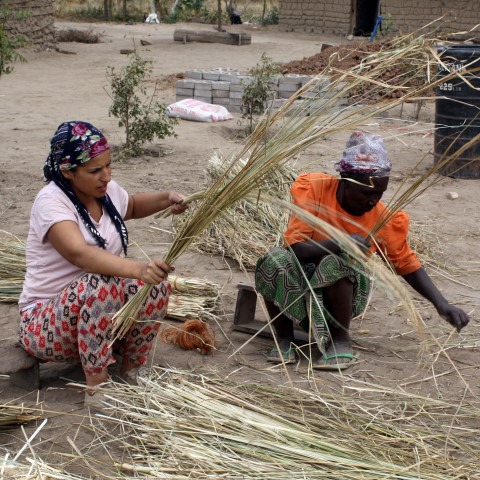 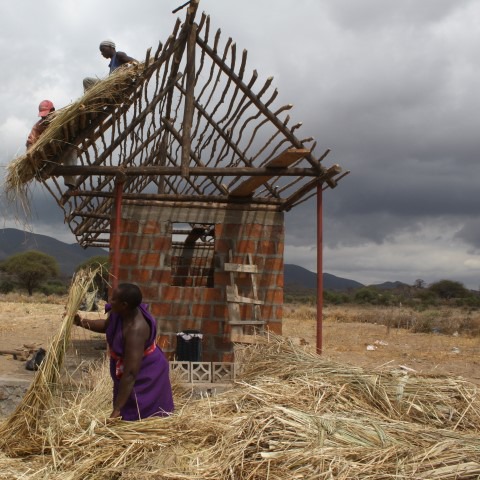 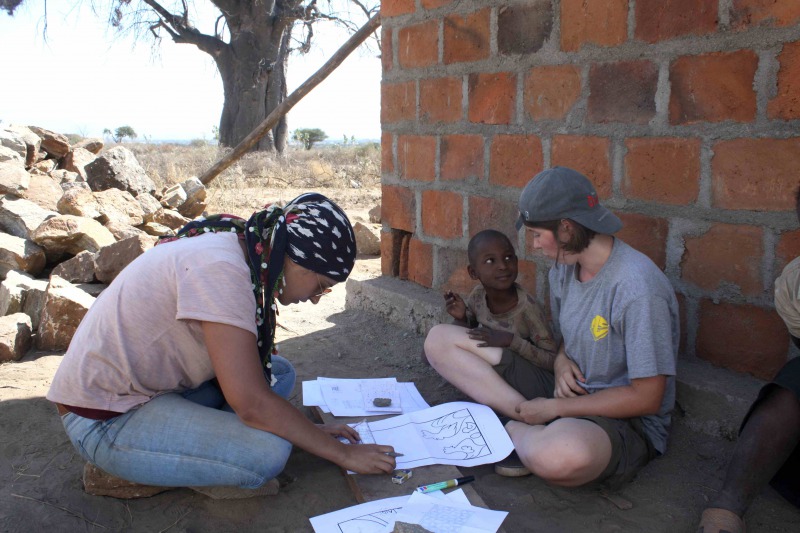 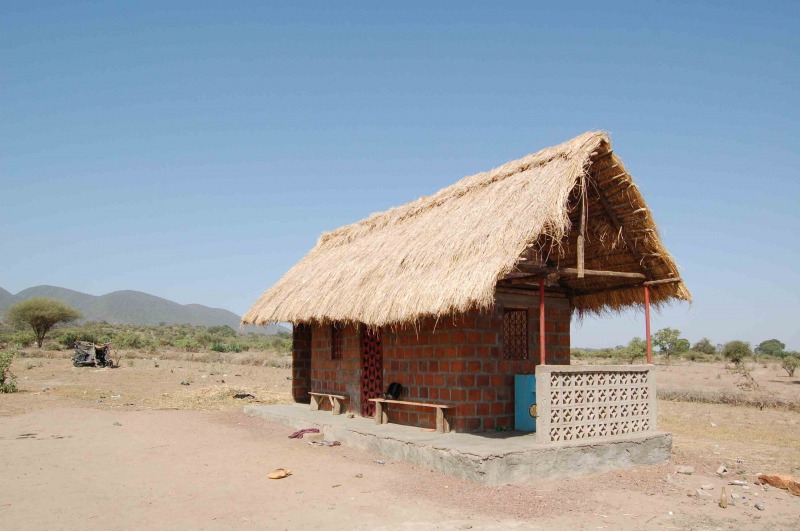 Front view of the finished house 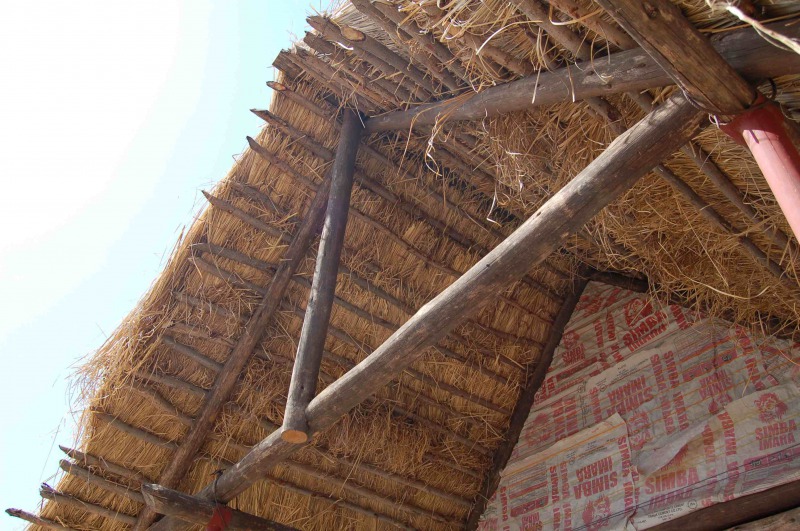 Detail of the finished roof structure 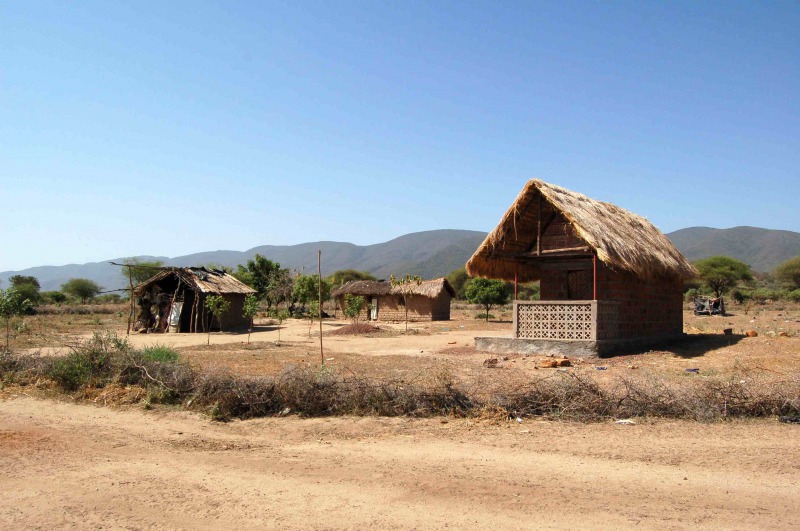 View of the site 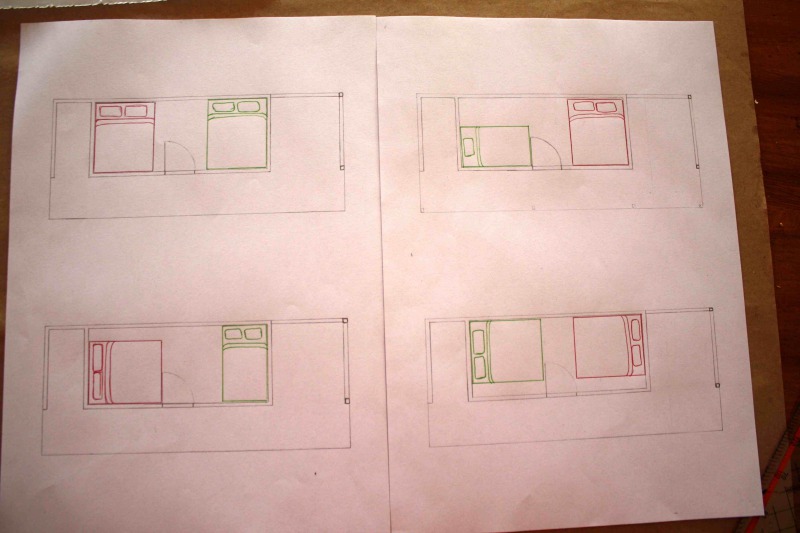 Alternatives for the house plan 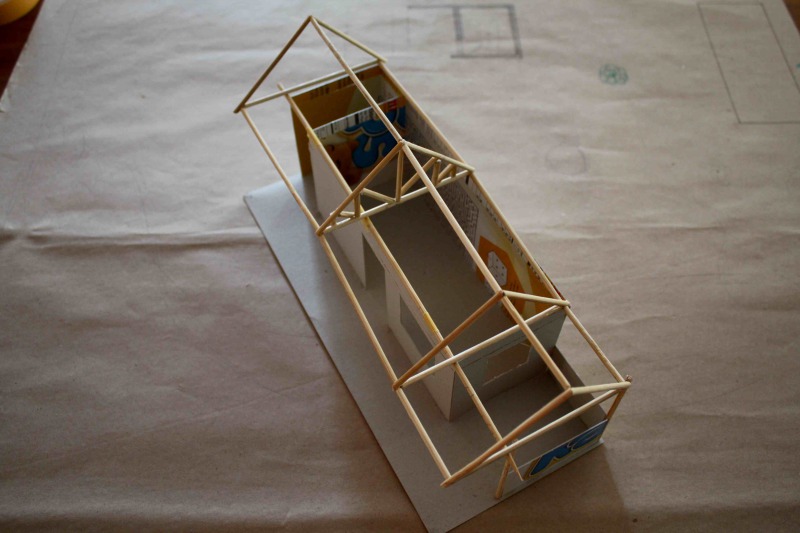 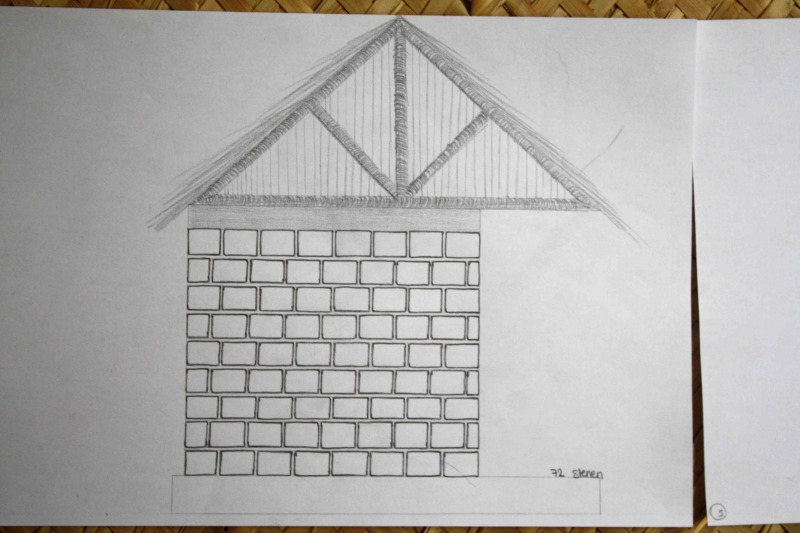 Drawing of the back elevation 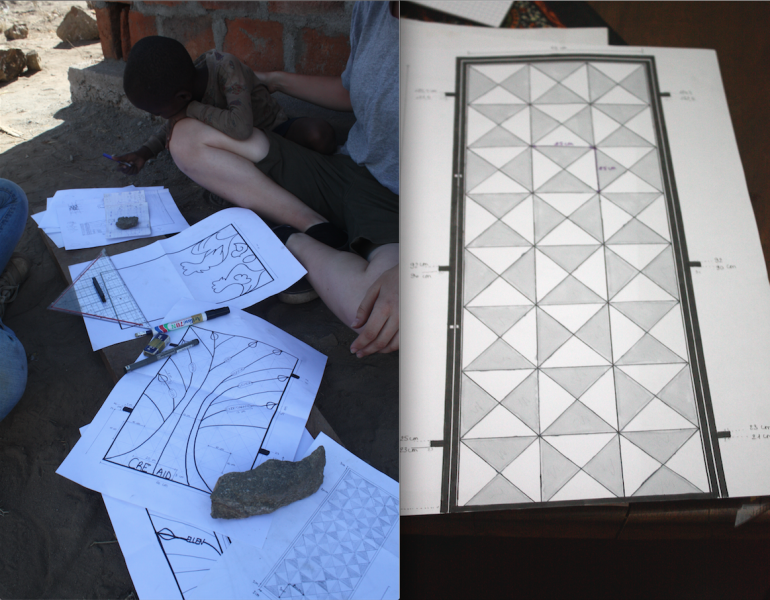 Drawings for the door and windows steelworks