Inspired by self-builders, improved by architects and engineers

Pallet Garage is part of the larger “Cabin(s) in the Woods”--the renovation of a small limestone house and construction of a second small timber frame house, these “cabins” to be connected by an 8-meter glass corridor, all on a small plateau of a heavily wooded and ravined 1-hectare site seventy blocks north of downtown Indianapolis. The garage anchors the project’s southern edge, shapes the pedestrian sequence from off-site into the house, and illuminates the entry courtyard.

The articulation, construction, and open sourcing of the design is aimed to enable self-builders worldwide, even those without internet access but who are in contact with local NGOs and non-profits, to benefit from this small demonstration project. In this, Pallet Garage is an argument on behalf of the intelligence of the designers and builders of the informal settlement, the deserted neighborhood, and the farmer AND evidences the knowledge that architects and engineers can bring to such found material systems AS IT shares such minimal, but measurable and meaningful, improvement with current building and urban practitioners around the world, the U.S., and my home city.

Pallet Garage is very likely the first building in the United States to be constructed almost entirely of timber pallets and granted a building permit (STR11-02978, City of Indianapolis, Department of Code Enforcement, August 26, 2011).

Pallets are omnipresent. Pallets have been used not only in the small architectures of informal settlements in Buenos Aires, Chihuahua, Istanbul, and Panama City, but in the blogs of self-builders throughout North America and Europe. The U.S. Forest Service estimates that nearly two billion pallets are in circulation in the United States alone and that two hundred million of those are landfilled every year. Urban pioneers in Detroit, Gary, East St. Louis, Camden and other falling Rust Belt cities reclaim pallets and shape composting frames, gardening hot boxes, and chicken coops. Farmers use pallets to build sheds, fences, and more. And architects--including Onix, ManosArchitects, I-Beam Design, Project Iceberg, Köbberling and Kaltwasser, among them--contribute temporary pavilions and museum installations.

But none of these builders have negotiated the gap between informal and formal economies with a permanent pallet building authorized by a building permit.

Among the constraints accepted: to use only industry standard 40” x 48” wood pallets; to conceive of a kit of parts composed of fully, partially, and not assembled pallets; to know pallet production processes and producers; and to accept that the details and constructions must be possible on the garage AND on sites in neighborhoods worldwide where only hand tools are available and heavy lifting is done not by industrialized machine but by strong backs. The design team is not demanding nor designing a “new” pallet to meet their needs; rather, they are utilizing, fully, the potential of the most conventional pallet to fulfill concerns for both quality of construction and quality of spatial experience by those of severely limited means.

Working drawings of Pallet Garage (including a Structural sheet for the 3D space truss) were posted online on August 1, 2011 for free use by anyone worldwide. 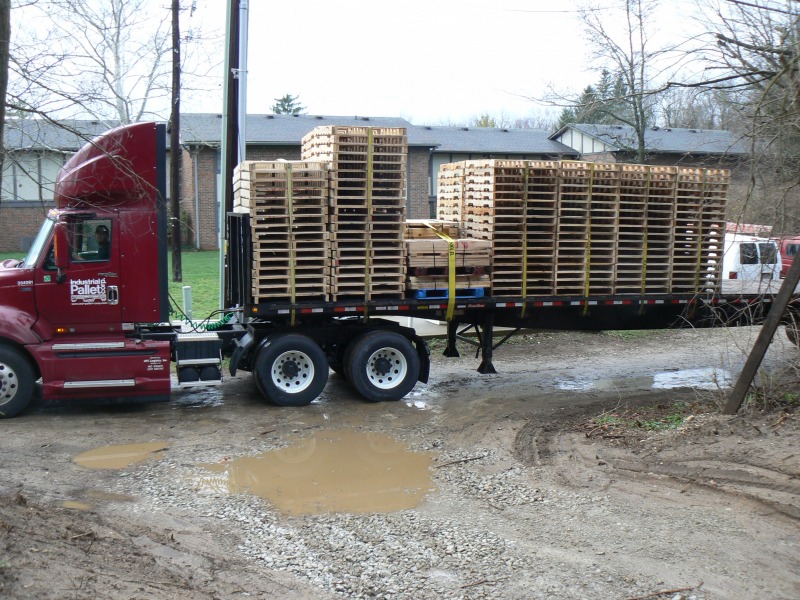 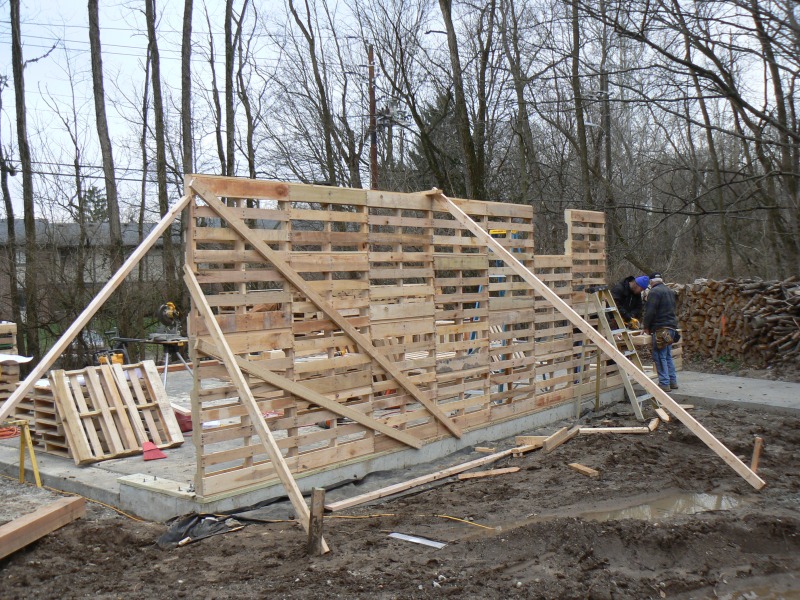 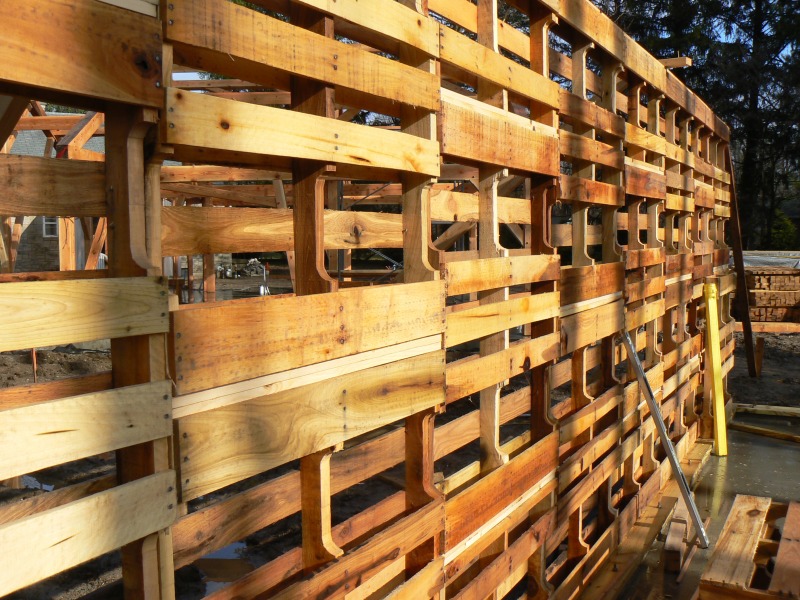 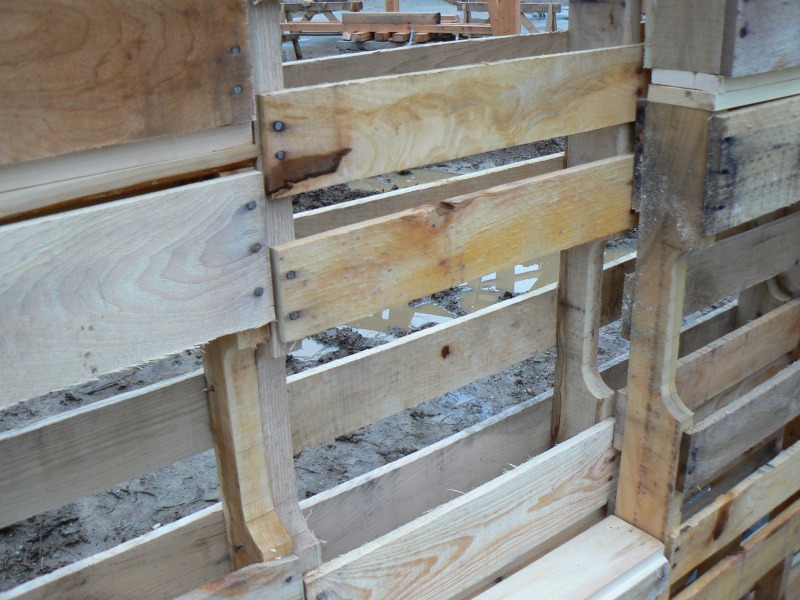 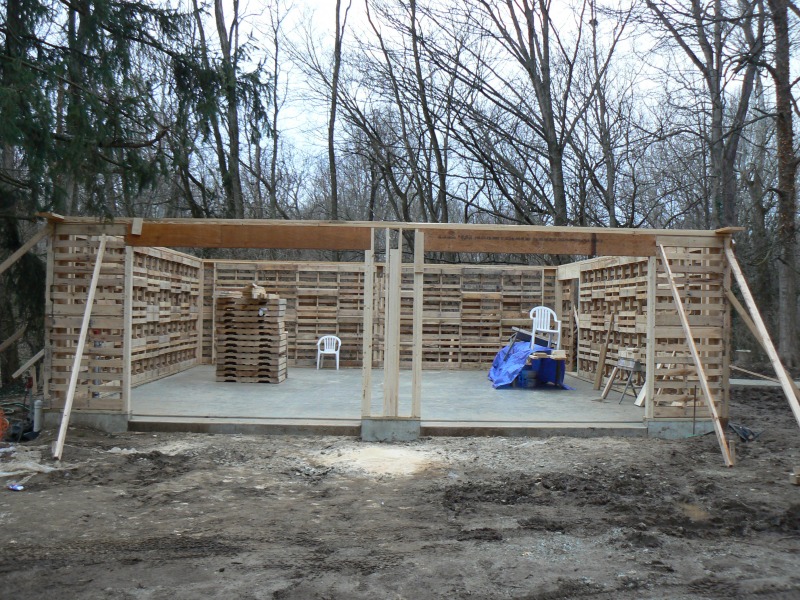 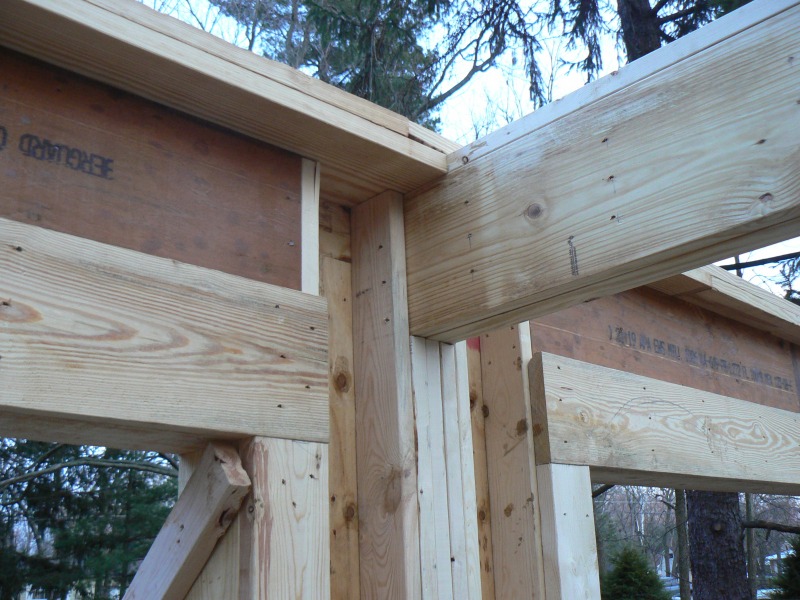 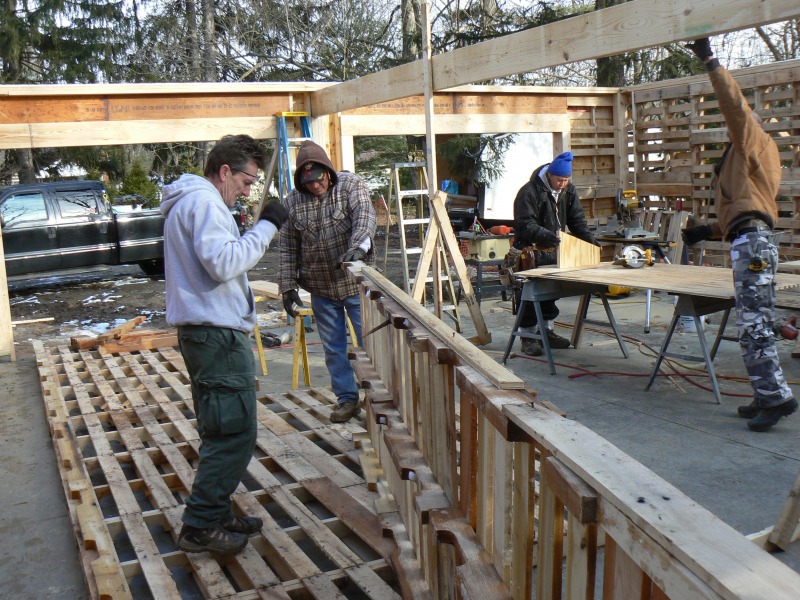 Half Trusses Assembled on Floor 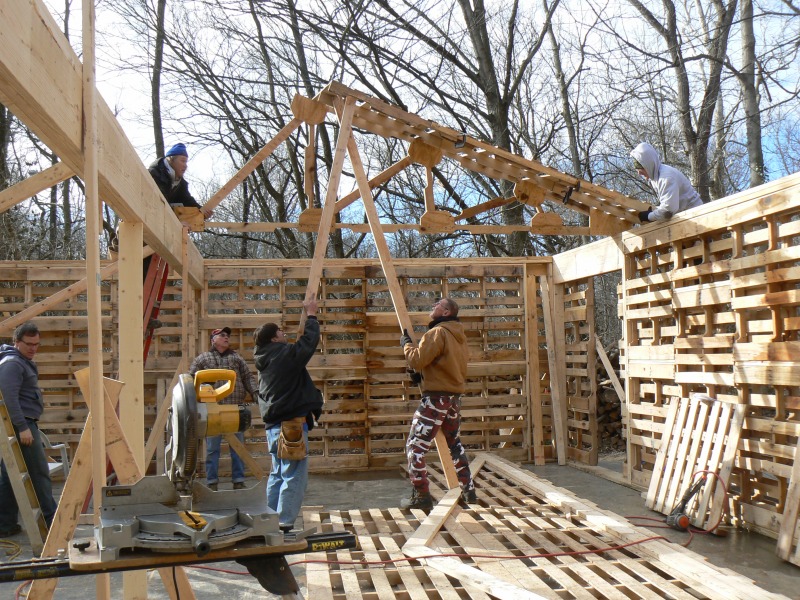 First Half Truss Lifted Into Position 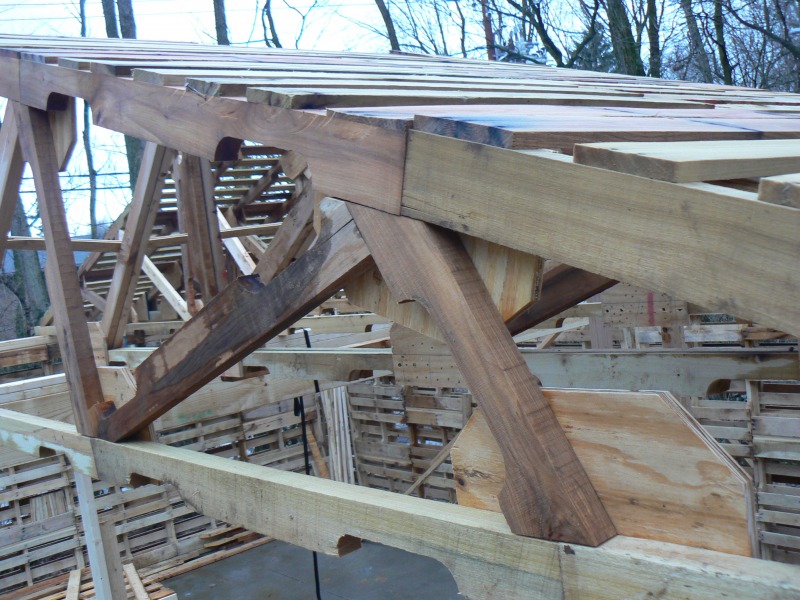 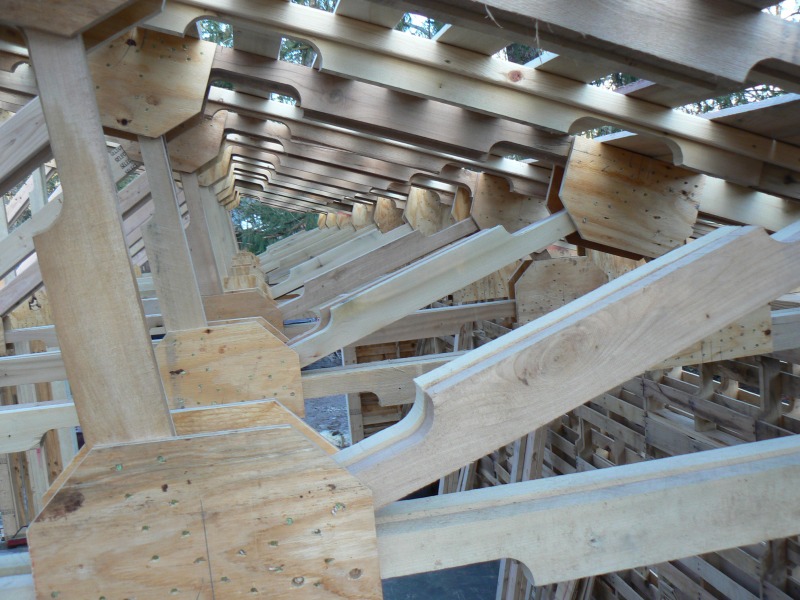 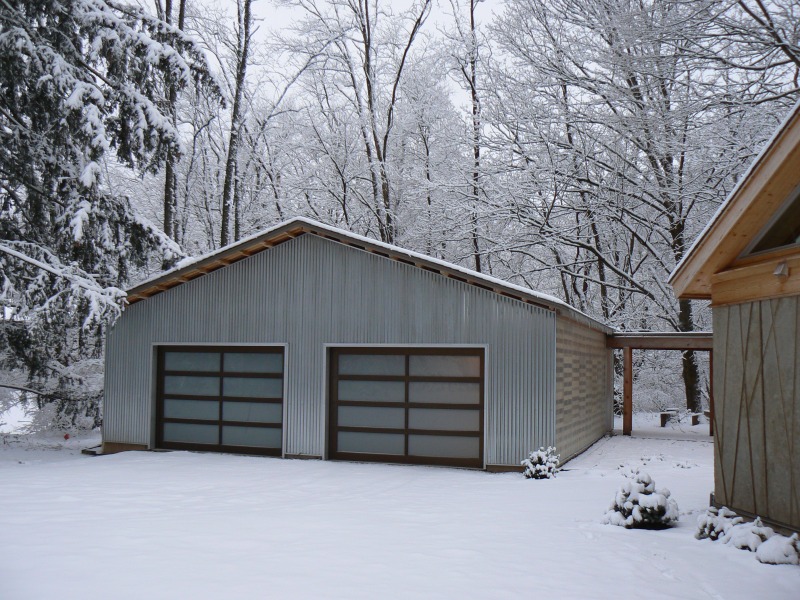 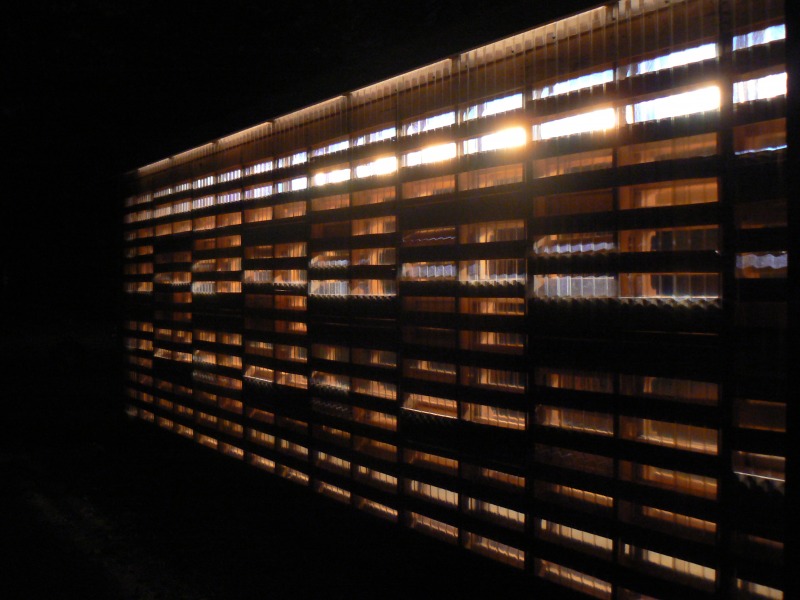 From the Entry Courtyard