Incremental Housing Project for the poorest of Indore, India

Traditionally, architects have contributed little to housing for the Third World urban poor. Those who opt to work for the poor need to rethink their roles; the numbers are overwhelming, the issues complex and the resources are very limited. One solution is to use land as a resource to produce housing for the urban poor, by allowing them access to it to build their homes. A study was conducted of such initiatives in a casy-study in India: The Aranya Housing Project, completed in 1988 and considered a model project.

Indore, India in the early 1980’s was facing a shortage of Housing. It had been estimated that approximately 51,000 families were homeless or living in illegal settlements. The Indore Development Authority initiated an affordable housing project for 60,000 people that would tackle this issue and at the same time be affordable to the government and urban poor. Previous efforts by the government to provide low-cost urban housing in India were aimed at supplying ready-built units. However, it took too long to construct a complete house and it became expensive for the low income group and also ate up too many resources.

A rectilinear site of 86 hectares was designed to accommodate over 6500 dwellings, largely for the Weaker Economic Section. This was an integrated approach for 'a sustainable society' where the mix of different economic levels of society could stay together.

Aranya Township was designed as a site and services project spread laid out in six sectors that converge on a central spine i.e., the Central Business District. One of the key elements of Doshi’s design was a hierarchy of open spaces that included small courtyards to be shared by three to four families, larger green spaces for each of the settlement’s six sectors, and a central playing field to serve the entire development. Open spaces and pedestrian pathways intersect and connect the clusters to the central spine. Each user has an array of options available from one room shelters to more spacious houses, and emphasis is mad on a sense of family and neighbourhood while striving to encourage adapatation and personalization according to individual’s needs and resources.

The Project site had black cotton soil prone to shrinking and swelling with moisture. Small diameter shallow piles with poured concrete was used, which made for very inexpensive foundation. The Piles were cross connected at plinth level through concrete beams on which regular load bearing masonry walls rested

For Most Income Groups, only a house plot was sold. The lower-income Groups were given several options that included a site and plinth, a service core and one room, depending on how much they could afford. Owners were free to use any material for the construction and decoration of house.Brick, stone and cement were locally available. Bright Colours in the facades, railings, grills and cornices commonly seen in the old houses of Indore were used in some of the houses. Internal streets and squares in the Economically Weaker Section were stone paved, reducing their cost and maintenance. Peripheral roads were asphalt paved for heavy traffic 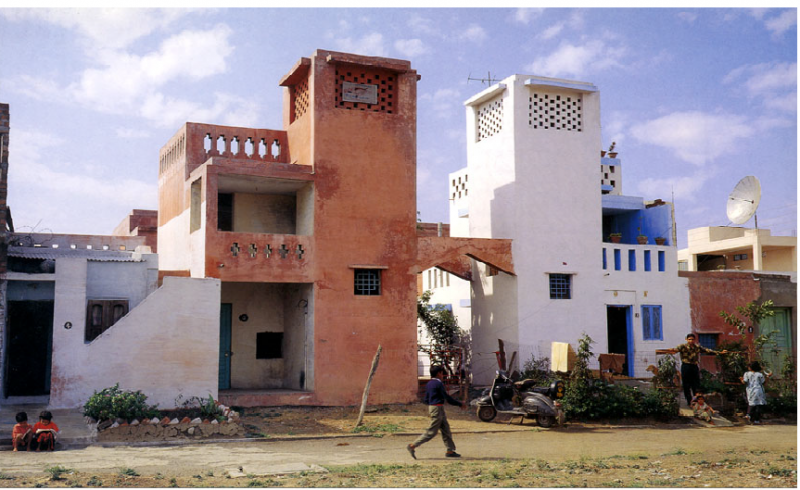 Residents given freedom to decorate and alter their houses

The Climate of Indore was effectively taken into account and a conducive living environment was achieved in Aranya. Most of the plots were small in and size and the houses were clustered in low rise blocks. The longer side facade is oriented in the north- south axis to reduct the solar radiations on building especially during summers. 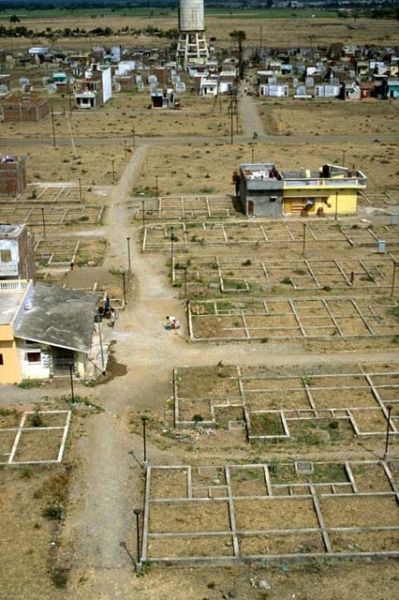 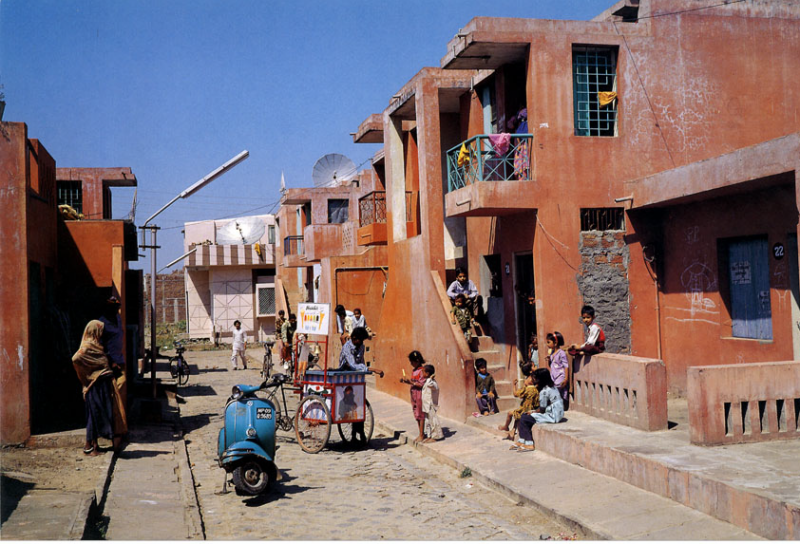 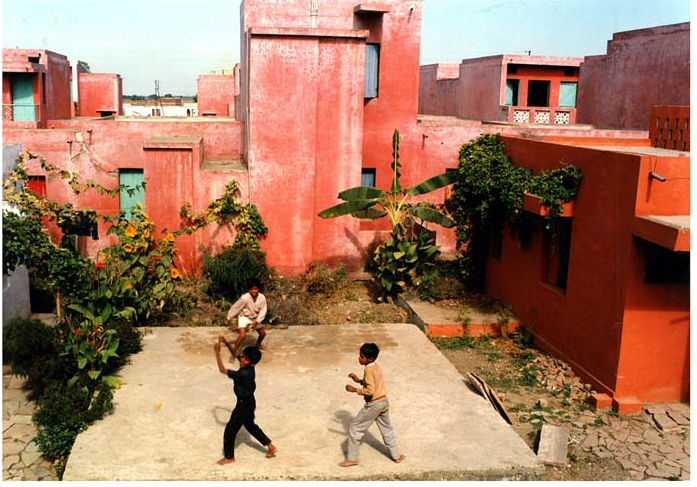 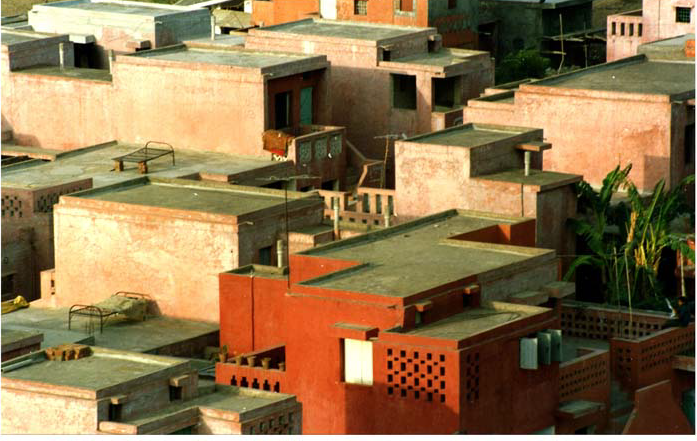 Form and Massing of Houses 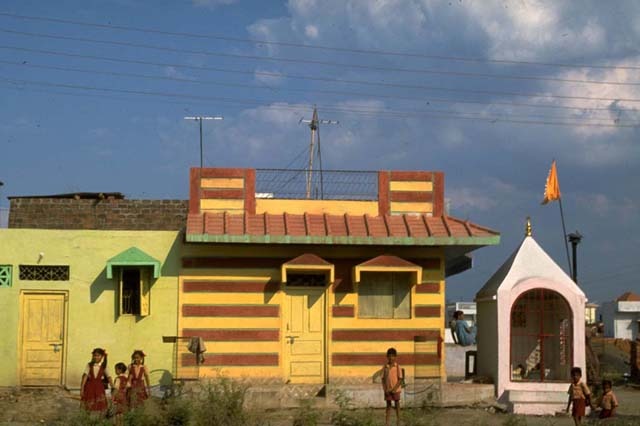 Example of a house developed by the needs and resources of the family. 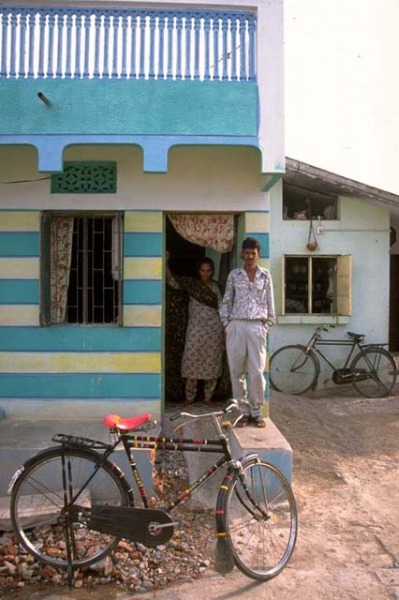 Example of a house developed by the needs and resources of the family.

image: Courtesy of Architect | © all rights reserved
i
technical drawings 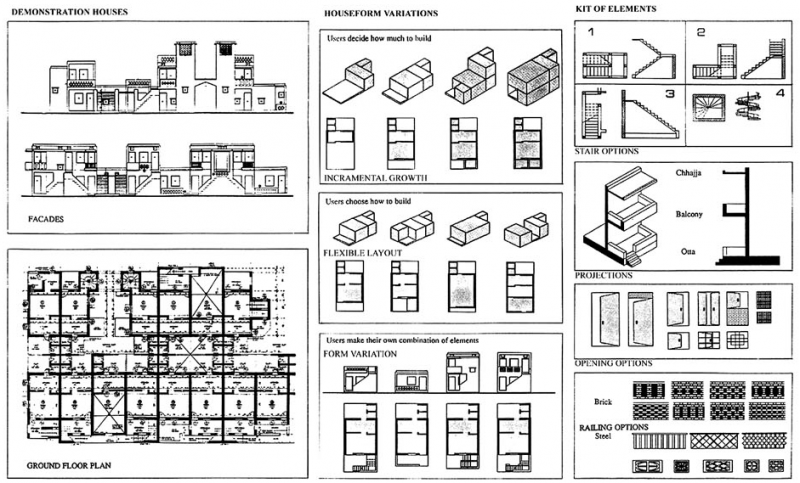 Users have the flexibility to decide how they wish tho design their spaces. A kit of meaningful elements was thus developed