some rights reserved
i
Category:
housing
Phase:
in use
Updated:
30 July 2012
introduction

As one of Africa’s largest cities, with a population of around 15 million people, the mega city of Lagos is comprised of a number of settlements which are growing at an alarming rate. One of these is an informal settlement called Makoko; a groundless, coastal slum area along the Lagos lagoon in the heart of Lagos. With shacks built on stilts, Makoko is one of the only settlements on water and has been in existence for more than 150 years.

As an established, spreading informal settlement, it is a fascinating example of how easily slums on water can be easily recreated. The majority of the community are fishermen, market traders and fish-smokers who prefer to live on the water, supplying most of Lagos with their catch. Canoes are their primary mode of transportation and other local industries are the nearby sawmills, boat construction, sand dredging businesses and salt processing.

Makoko has been largely governed by traditional leaders as the state and federal governments have refused to recognize the community as legitimate. It is understood that there is a complex relationship between traditional leaders on the water and on the land. Land allocation is based on the landlord/tenant concept; with landlords claiming ownership by virtue of years of occupa­tion. However, the 1978 land use decree vests owner­ship of all land on government. Also a decree in 1972 ceded all coastal land to the federal government. This has been a main source of dispute between State and Federal government.

Research findings revealed that parts of Lagos were to be reclaimed by the government and as such, high density communities were earmarked for evacuation. Redevelopment and improvement causes displacement and one such example of this was on the 7th of July, 1990 where the Governor of Lagos State, Col. Raji Rasaki, reclaimed government land displacing and dislodging slum dwellers living in Maroko on Lagos Island. The event now known as 'The Maroko Displacement' found 300,000 slum dwellers without homes overnight. Makoko was at similar risk of displacement; and at 12 noon on the 16th of July, 2012, the Lagos State Government, made good their threat and began demolishing Makoko. 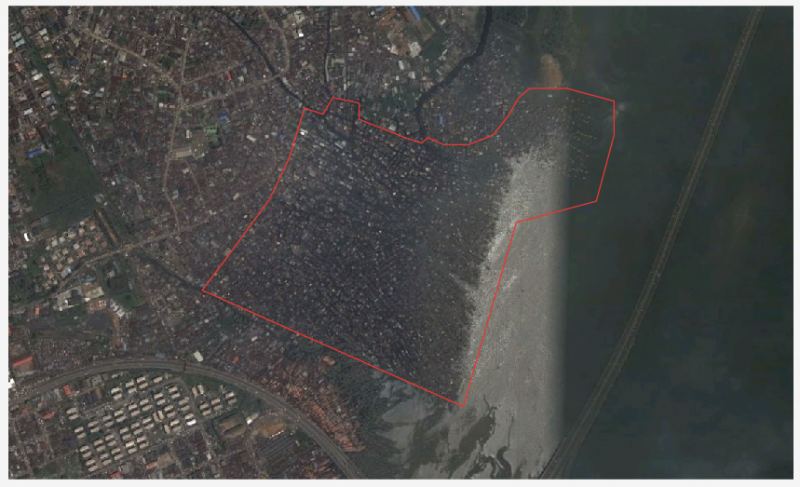 The typical family structure within the community is polygamous, with the average dwelling housing at least 15 occupants. To have many children is considered a sign of wealth therefore family planning is not commonly practiced amongst the more traditional members of the community. There are a lot of children in Makoko and each household has at least five children under the age of 10. 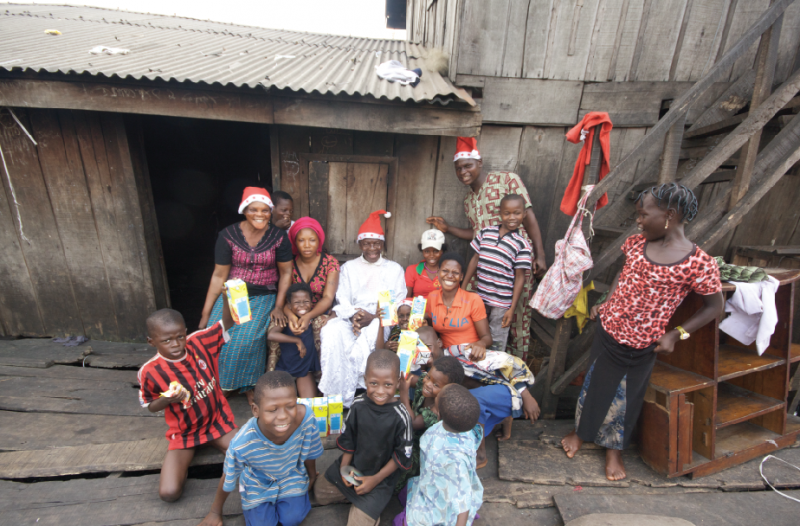 A Makoko family at Christmas

Most buildings in Makoko are made using basic timber construction elevated on stilts made out of wood or bamboo. This appears to be a quite sustainable system for the community due to its proximity to the sawmills as well as the availability and affordability of bamboo. Due to the quality of the timber used, timber piles have a tendency to rot but are relatively stable if left undisturbed.

Roof coverings are made either with corrugated roofing sheets or thatch. Some of the buildings in the oldest part of Makoko have been in existence for over 50 years, but overall, a majority of the buildings have a lifespan ranging anywhere between 20-50 years. 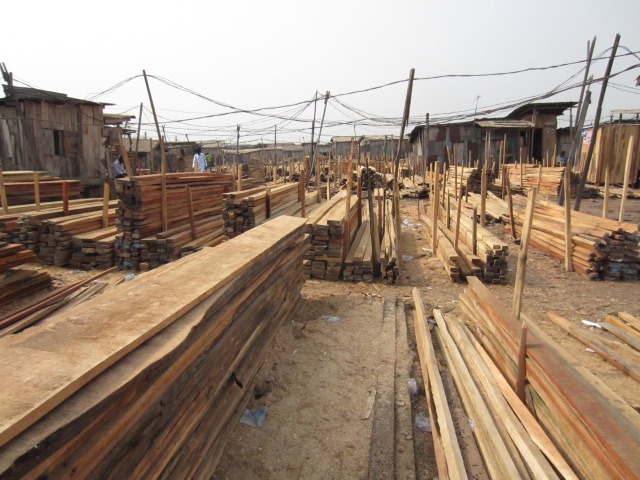 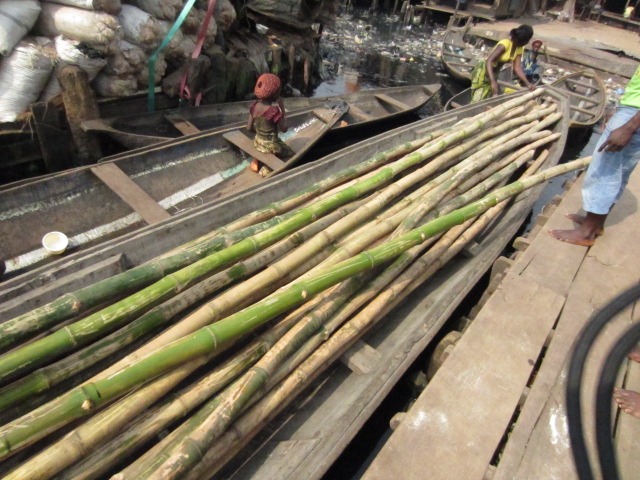 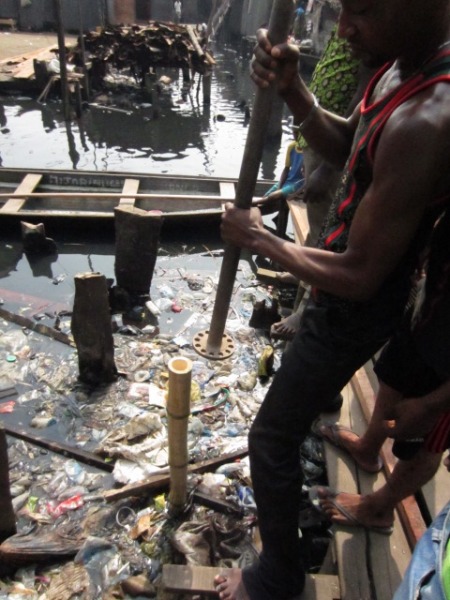 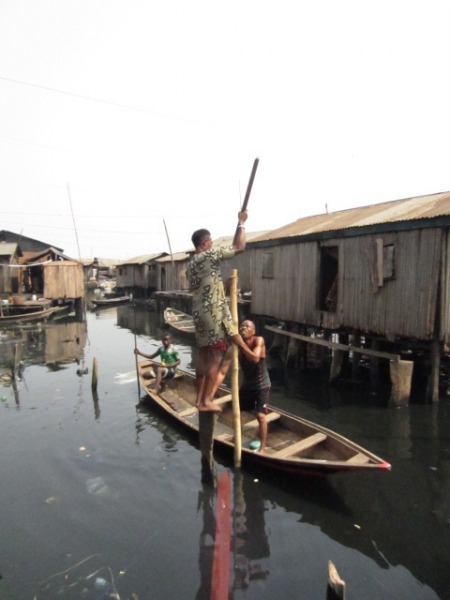 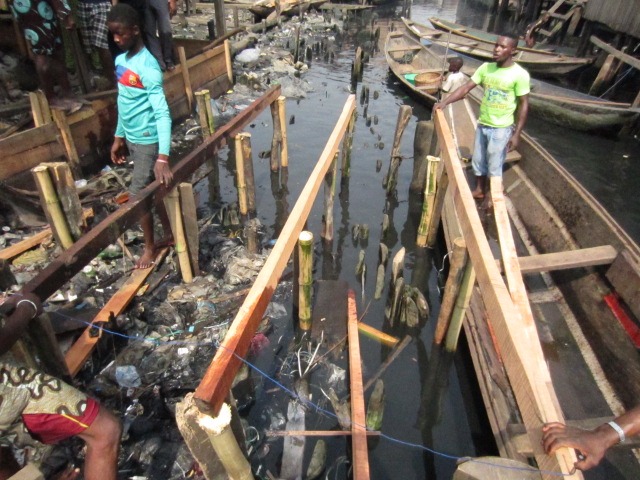 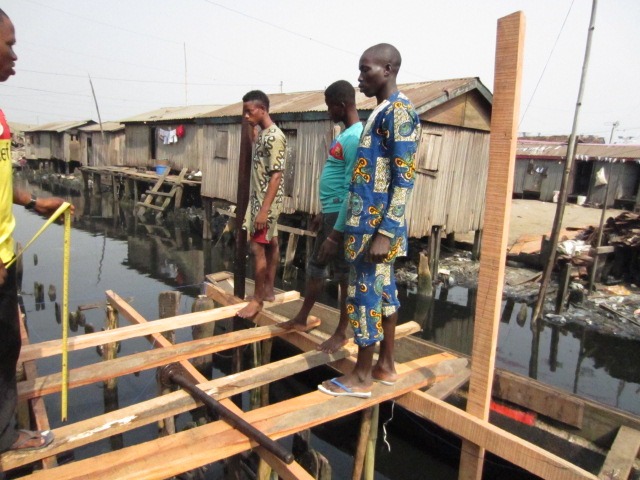 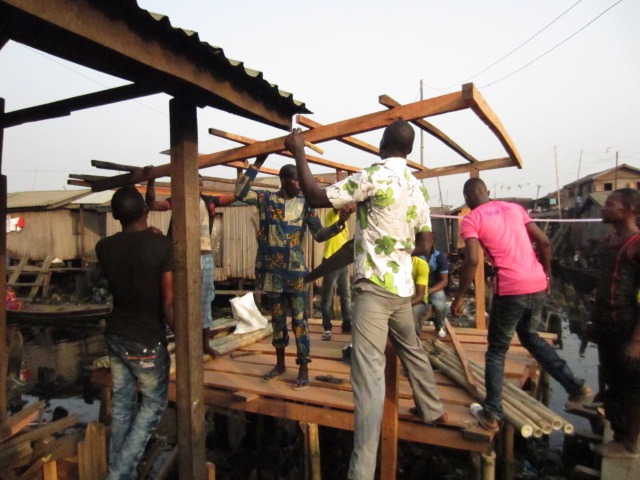 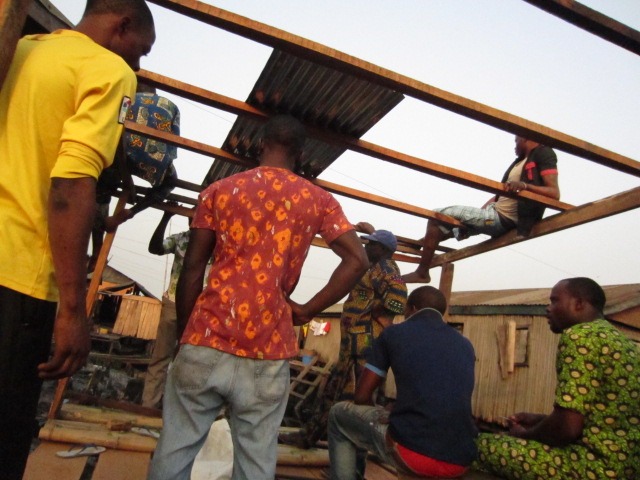 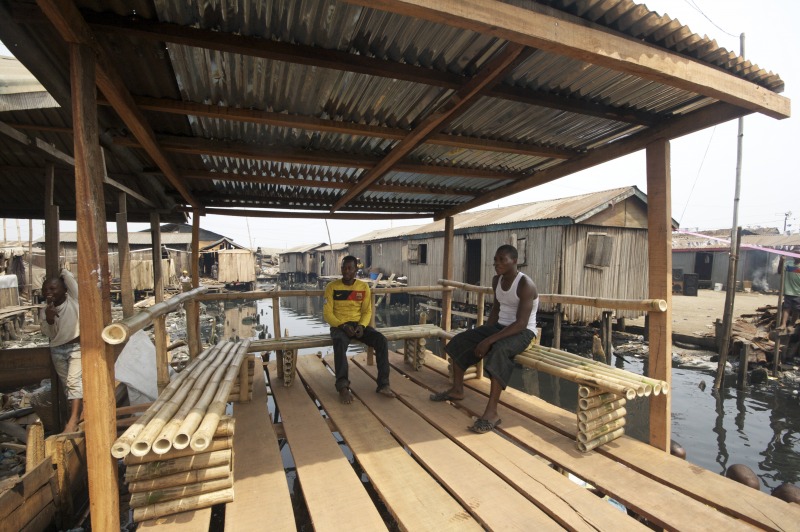 A Canoe Stop in Makoko

image: Isi Etomi | © all rights reserved
i
earth and climate

There are two main season in Lagos: dry and rainy. The dry/harmattan season occurs between December and February and the rainy season occurs twice a year from February till July and from October till November.

In February 2012, Lagos was hit by a powerful storm which caused a lot of damage to property within the community.

Lagos lagoon is relatively shaloow with water levels in Makoko ranging from 500mm at the points closest to land; and 2000mm towards the pylons in the lagoon which mark the outer boundaries of the community. 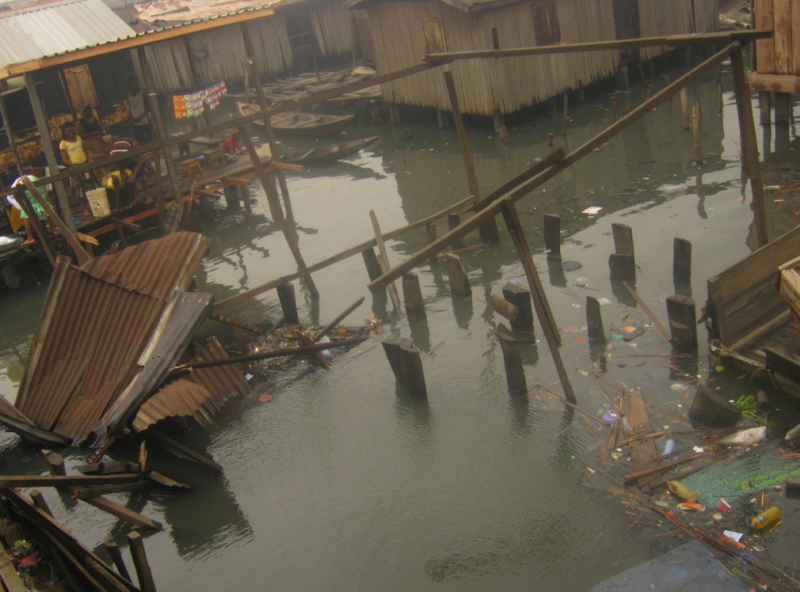 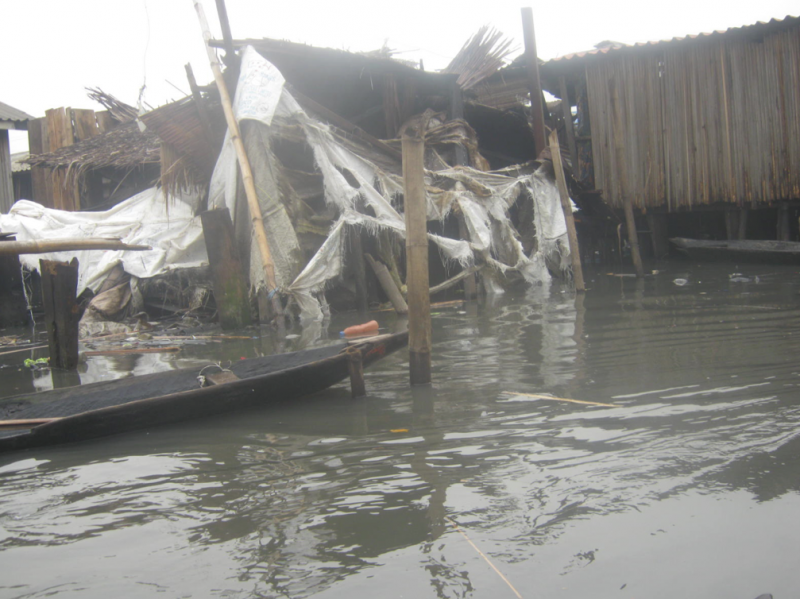 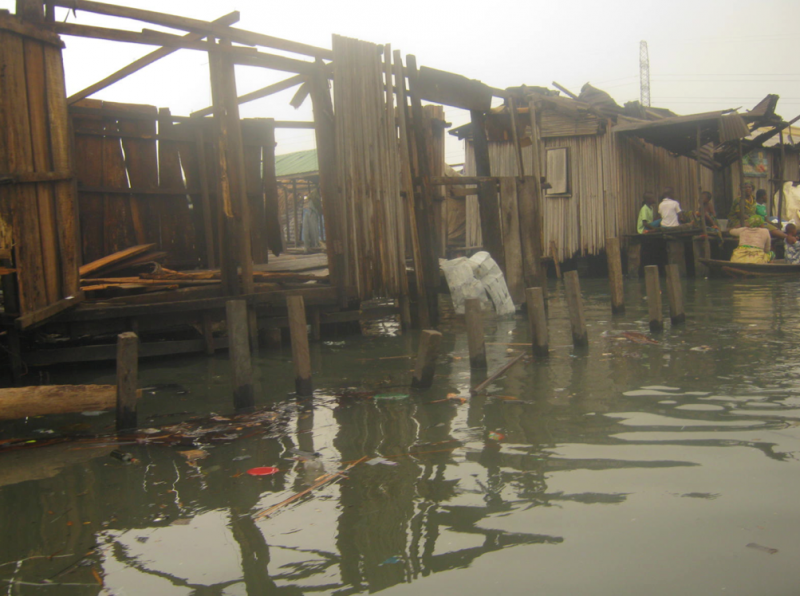 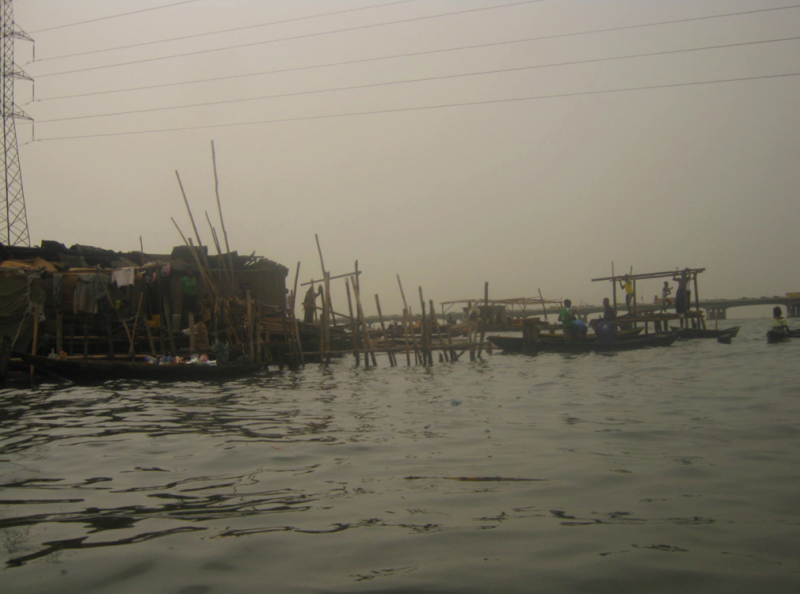 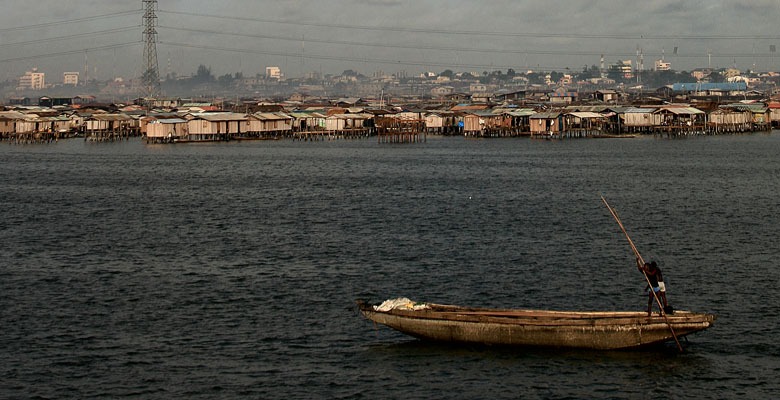 View of Makoko from the Third Mainland Bridge, Lagos

Children crossing one of the many bridges which run through Makoko

View of Makoko houses from the central channel

Some of the houses in Makoko are almost 50 years old

View from a single-storey building in Makoko

Child rowing her canoe through the community

Fishing nets spread beside a home

These pylons can be seen along the lagoon edge of the community. Some houses have been built beyond this point.

Most of the houses in Makoko are built from salvaged materials: timber, plastic bags and corrugated sheets.