From a Toilet to a Pucca House:
Incremental Housing in Resettlement Colony, Savda Ghevra, Delhi

The right to housing is universally recognized as an important component to the right to an adequate standard of living. Amartya Sen argues for positive development though the lens of 'freedoms' (Sen, 1999) as opposed to and including the 'right' to clean water, clean air, adequate housing, sanitation, mobility, education, health care, democratic participation in decision making etc. The emphasis on 'freedoms' is a call to build capacity (Sen) and participation as opposed to rights (UN) which inherently implies that there is a custodian of that right; and one right might eliminate or come into conflict with another right – say the right to housing with the right to green space. The UN defines the 'right to the city' within a framework of 'equality' rights whether social, political, economic or cultural (UN, 2008, pp. 57) as a way for inclusive development. The problem with the rights based approach is that, for example, all Indian citizens have formal and substantive rights but to use the phrase coined by the anthropologist Arjun Appadurai many are "citizens without a city" (Appadurai, 2001, p.27) and what is missing is the participatory dimension. The real question concerns the actualization of those formal and substantive rights into collective (participatory) capacities.

According to the 2008 Economic Survey of Delhi, by population, is composed of 14.8% jhuggi jhompri (JJ) Clusters, 19.1% Slum Designated, 5.3% unauthorised, 12.7% resettlement, 5.3% rural villages, 12.7% regularized-unauthorized, 6.4% urban villages and 23.7% planned colonies. Only a quarter of Delhi residents live in formally planned settlements – all the rest are bound together as urban forms that have evolved outside the Master Planning process, although often influenced by regulation and implementation policies. As such, Delhi, India's capital city provides a suitable backdrop to examine the issue of housing in resettlement colonies.

Savda Ghevra (SG) is a resettlement colony developed by the Delhi Urban Shelter Improvement Board located about 40km west of New Delhi to re-house slum dwellers evicted from inner city areas. When fully occupied, SG is likely to be the largest resettlement colony in Delhi (CURE, 2010); home to more than 20,000 families relocated from slums in the city centre and development corridors. Much of this clearance happened in anticipation of the Commonwealth Games in September 2010 where the Games were seized on as an opportunity to 'clean up' the city (Baviskar, 2011).

There are currently about 8500 families with 42,500 people living in plots allocated by the Municipal Corporation of Delhi (MCD). The resettlement of Savda Ghevra does not involve housing but simple relocation on semi-serviced blocks 18 or 12.5 sq m plots allocated on the basis of eligibility. Despite the formal planning the site has not developed in a consistent manner – this is in part because the existing infrastructure supplied by the government remains un-built or incomplete but also because the relocated families have mostly incrementally 'self-built' their homes – a process characterised by individual decisions. 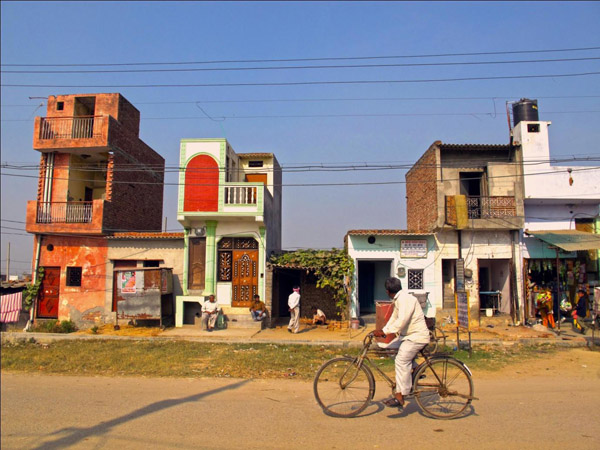 There is currently what can loosely be described as 3 types of housing in Savda Ghevra:

(1) Houses made with temporary building materials such as bamboo and tarpaulin are classified as kuccha meaning 'temporary'.

(2) Houses with brick walls but corrugated tin roofs (i.e. cannot take another floor) are semi-pucca and

(3) Houses made of concrete and load-bearing brick walls and roofs are classified as pucca meaning good or permanent.

Such housing is built by a process that is not planned and in this paper is defined as 'incremental'; the following image shows the typical stages found in Savda Ghevra: 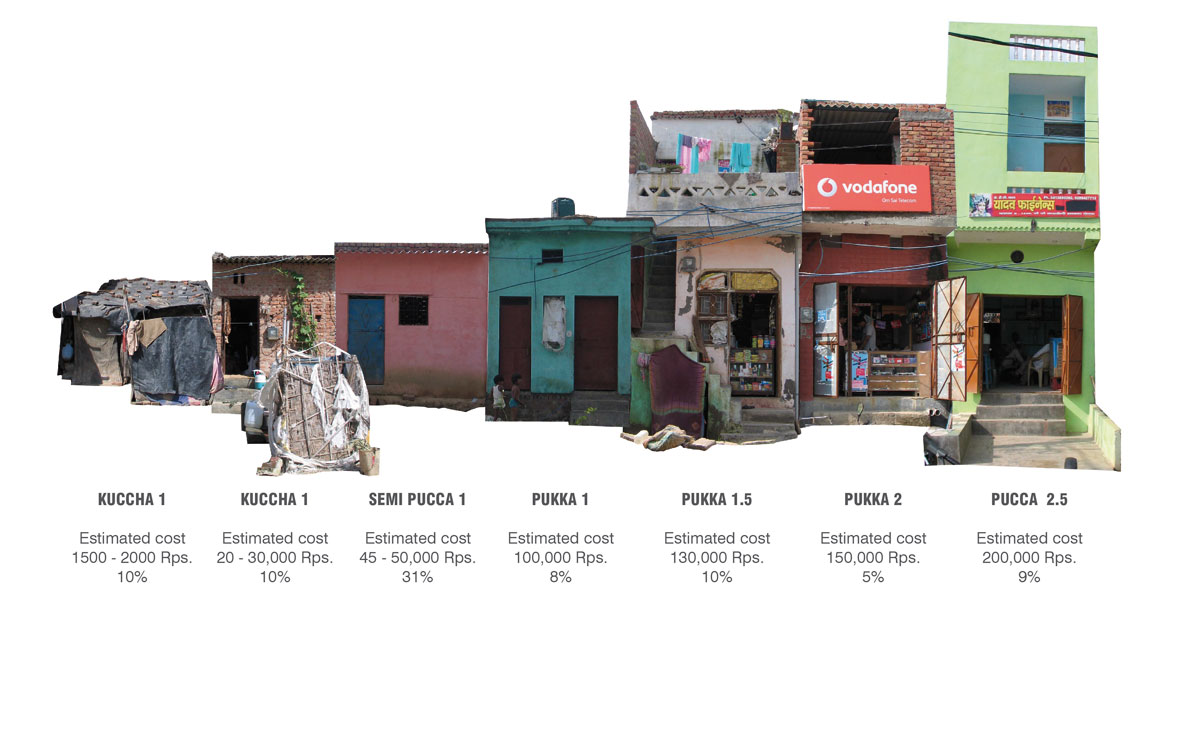 Households in Savda Ghevra that invest in a pucca structure can use the extra space generated to incorporate sanitation facilities and opportunities for livelihood initiatives such as rental spaces, shops, workshops, hair salons and even game rooms. However and although residents in Savda Ghevra have a legal right to be there, construction has remained predominantly single story with 31% of its inhabitants residing in semi-pucca housing and another 20% in kuccha homes – offering none of the livelihoods or health benefits associated with multi-storeyconstruction. It is hard to draw specific conclusions on why so much of the housing stock remains un-developed. Based on resident interviews, the massive financial losses during the process of resettlement, the high personal cost required to build a multi-storey pucca house, short-term leases and the lack of jobs due to its peripheral location are all sited as reasons.

It is in this context that work began with relocated families and local contractors to design and help build housing that would be structurally safe, technically sound, economical and capable of being built incrementally in Savda Ghevra. Because of the prohibitive costs of construction alternative ways of building, without compromising stability, are required. Inspiration came from Le Corbusier's Maison Dom-ino to develop a prototypical building system that employs structural columns and slabs, which can be in-filled over time. This is not new idea and has been around since the 70s when site and service schemes came into prominence. 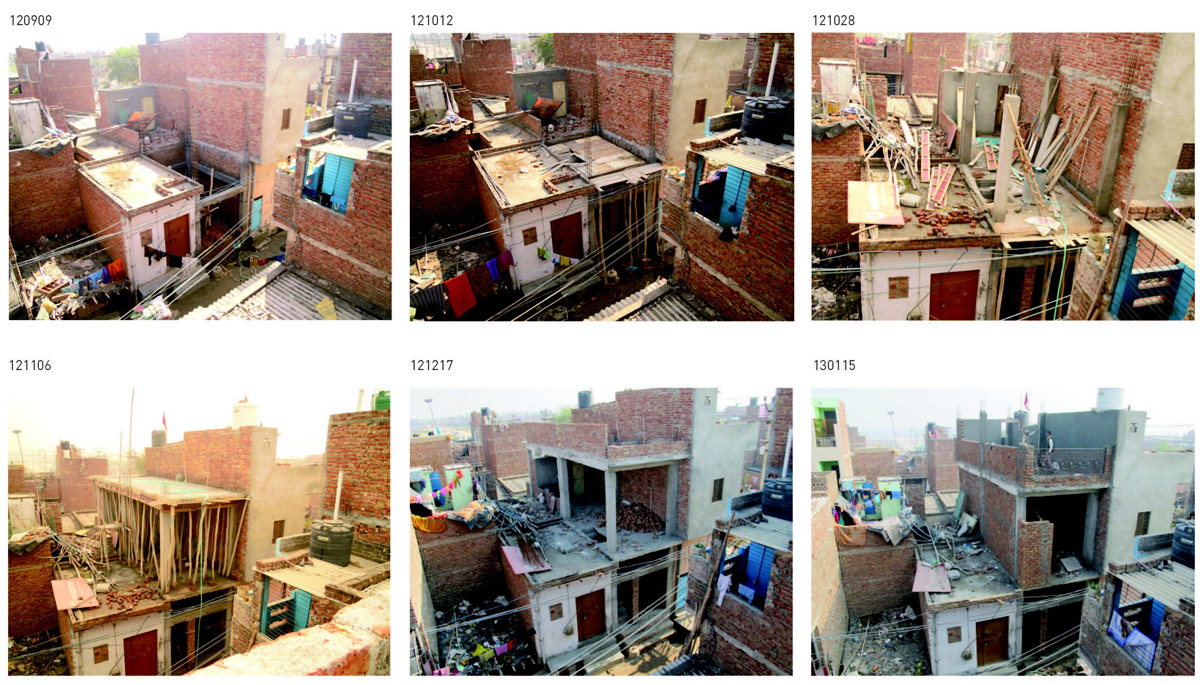 The first version testing this idea was built in 2012-13 (above image). The construction process revealed much about the limitations of constructing with concrete which requires further study. What did emerge was a greater understanding of the financing barriers: Housing loans are charged - because it is a low-income / slum resettlement colony - at high-risk interest rates. Standard loans are high-risk principally because the concept of collateral in self-built, often precarious housing isn't there. Thus, the micro loaning market for affordable housing struggles to operate in an area like Savda Ghevra. In response to this the concrete frame on the one hand engenders and promotes the existing incremental way of building but also introduces a housing standard that enables loans and other forms of housing credit which was tested in this instance with the establishment of a 'revolving housing fund' implemented by partnering NGO, Centre for Urban and Regional Excellence (CURE).

In parallel to developing housing models a decentralized sanitation infrastructure has also been implemented. The housing model offers cheap and quick upgrades which incorporate a toilet into the home which can connect with the decentralized sewerage. The following model has been developed and will be tested this year aimed at servicing those at the bottom end of the housing spectrum: 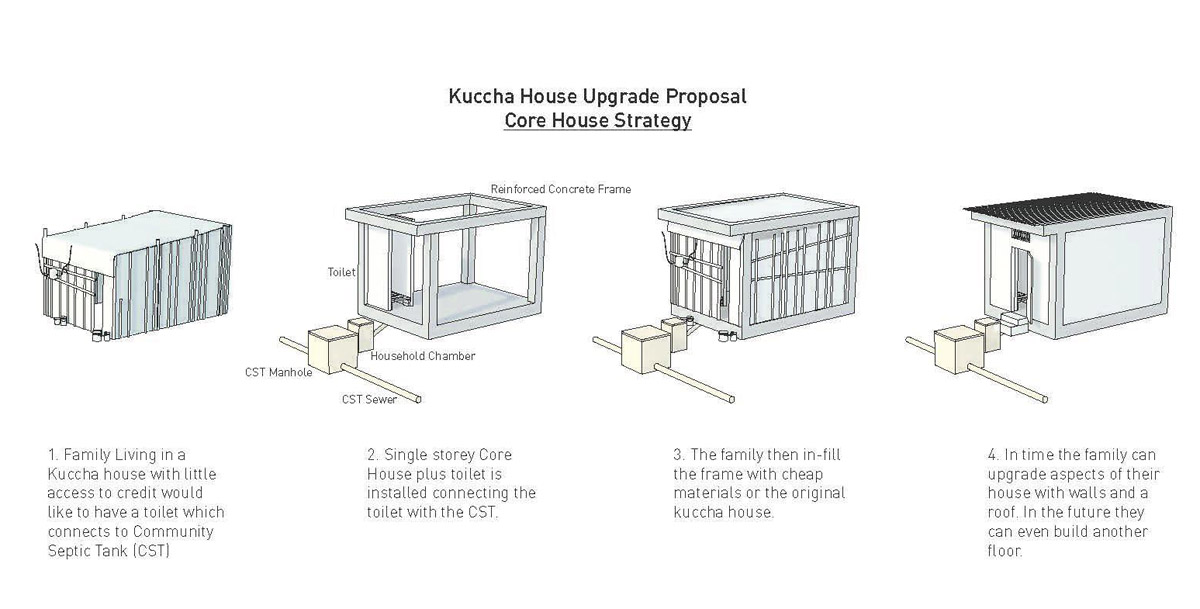 Linking housing to revolving housing credits and toilet upgrade credits is based on the observation that there are already informal loaning groups - predominantly among women - managed informally outside of the state or banking sector. It is the ambition to rather than ignore such initiatives to support and empower them.

For cities to function as a positive agonistic context for all citizens they need more than an oversimplified, one-size-fits-all approach. The government can empower communities to make their own housing choices if it sets aside tired assumptions about the delivery of housing and single-use zoning; and if it can engage with stakeholders especially when it comes to affordable housing.

* Julia is a British/Venezuelan Architect (RIBA II, AA Dip), urban researcher and PhD candidate within the research department Architecture of Rapid Change and Scarce Resources (ARCSR) at London Metropolitan University. Her research and design practice focuses on mostly sanitation but also housing, urban planning, inclusive development and participatory design processes. She is currently setting up a design and research practice in Delhi incubated within the Indian NGO CURE, Centre for Urban and Regional Excellence.

Current projects with CURE in Delhi include re-designing various community toilet complexes; networking a small slum cluster with sanitation infrastructure and designing / building toilets that are demountable and freestanding; a regeneration plan for the Taj East drain which runs through 5 slum clusters next to the Taj Mahal in Agra; and a urban plan which proposes solutions for solid waste management, drains, sanitation and housing in two large wards (boroughs) in East Delhi. As an independent design consultation she is about to start a work on a project which aims to build 5000 toilets in rural Maharashtra, India by 2015 and then launch a larger campaign. And she continues tow work on projects in Savda Ghevra where last year working also with CURE we completed a multiple award winning project which brought sanitation infrastructure to 2000 plus people.

In 2011 she won a Holcim Award in the ‘Next Generation’ category, an international competition that recognizes innovative projects and future-oriented concepts which really helped kick start my career. This year she was awarded Emerging Woman Architect of the Year by the Architectural Journal and won a SEED Award for ‘Excellence in Public Interest Design’ for the sanitation project in Savda Ghevra. She was also recently nominated for a World Design Impact Prize and included in ICON magazines ‘Future 50′, “a snap shot of 50 young designers and architects (who) are pushing the boundaries of their disciplines and trying to change the world”.  Her blog was picked by the guardian as one of the 'best city blogs' and she tweets @atjuliaking. 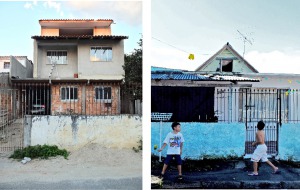 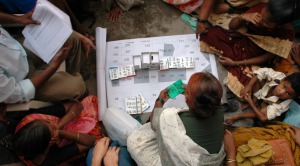