Over the past decades, Curitiba, the capital of the Paranà State has been known as a "model city", thanks to the cutting edge urban practices promoted by the former city mayor and urban planner Jamie Lerner.
However, the '70s significant migration to urban areas triggered an unequal growth phenomenon in Curitiba, as in many other Brazilian cities.

The city's boundaries were expanded until the fringe of the municipal territory. The poorest communities were isolated in low-density mass housing or in uncontrolled informal settlements, excluded from the capillary network of services that characterizes the city center while upper income households, on the other hand, settled along the city's main axes in dense and exclusive condominiums.

This continuous expansion led to increasing land values as the parcels available for development became more and more scarce. As a result, the municipality is nowadays facing an alarming housing issue represented by the 80.000 families currently waiting in the COHAB lists to receive a house through federal programs.

Low density at the fringe of the city

This research project intends to raise a series of questions concerning the actual Brazilian urban policies and, at the same time, to develop a new approach for urban revitalization that can be systematically adopted in similar cases. It also aims to offer alternative solutions to the standardized affordable housing development practice through both top-down & bottom-up approaches, and by the re-conception of the public realm as the main catalyst for social change.

For this purpose, we decided to investigate a border community where both formal and informal practices coexist. We believe that the interaction of these practices can better contribute to the process of urban renewal.

Vila Nossa Senhora da Luz do Pinhais (Vila NSDL) is the first housing development in the Paranà State. It was built in 1964, when the military government decided to stunt favela's expansion in the Paranensis capital. It was planned to accommodate low income families displaced from favelas in the neighborhoods of Cidade de Deus and Vila Kennedy (both located in Rio de Janeiro.) 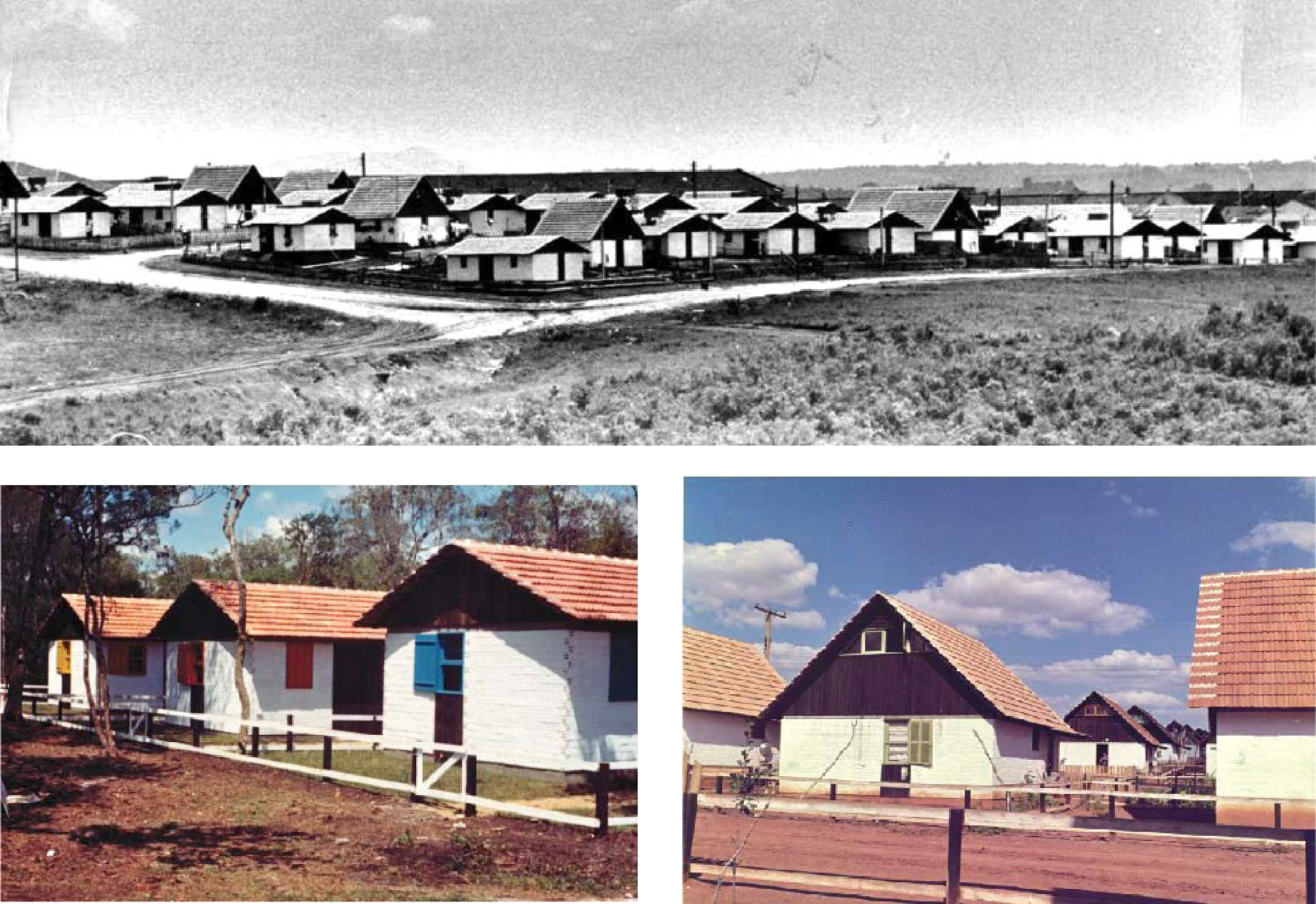 The planning and construction management were carried by COHAB (Companhia de Habitação Popular) and financed by the BNH (Banco National da Habitação) supported by US funds, with the supervision of the technical manager Arch. Alfred Willer. The project planned to build a total of 2176 houses on an area of 800.000 m2.

The master plan consisted of a massive grid in conformity with the established Modern Movement legacy in Brazil, using a precast housing system. In each parcel, an "embryo house" was placed and served as an initial element for the future growth of the house. After the completion of the project, the lack of connections which were implemented only 20 years later, between the area and any economic activities, provoked a widespread discontent and a sense of isolation. Many families decided, therefore, to sell their new houses and move back to informal settlements closer to the city center.

After the development of the industrial city (CIC), which is nowadays the most important industrial pole of the state, the neighborhood became an attractive place. A gradual improvement of the inhabitants' living conditions initiated a phase of transformation, which resulted in a progressive densification of the private built environments.

Vila Nossa Senhora da Luz represents a peculiar mediation between the top-down planning actions in the initial construction phases, and the spontaneous developments implemented over time by the inhabitants through their informal practices.

The 1964 master plan shows an urban fabric and a subdivision clearly inspired by the American suburbs. Nowadays, Vila NSDL presents a very different appearance due to the constant transformations its inhabitants undertook to adapt their homes to their needs and to the growth of their families, often switching their unit from a single-family to a multi-family dwelling typology.

This densification left traces in the relationship between built space and urban voids: despite the neighborhood being better equipped with infrastructures, a separation between private and public spaces occurred. The poor quality of the public spaces design, the lack of public utilities, the lack of maintenance, as well as the high crime rates, caused the inhabitant of Vila NSDL to separate themselves from the neighborhood's open areas by enclosing their private parcels. 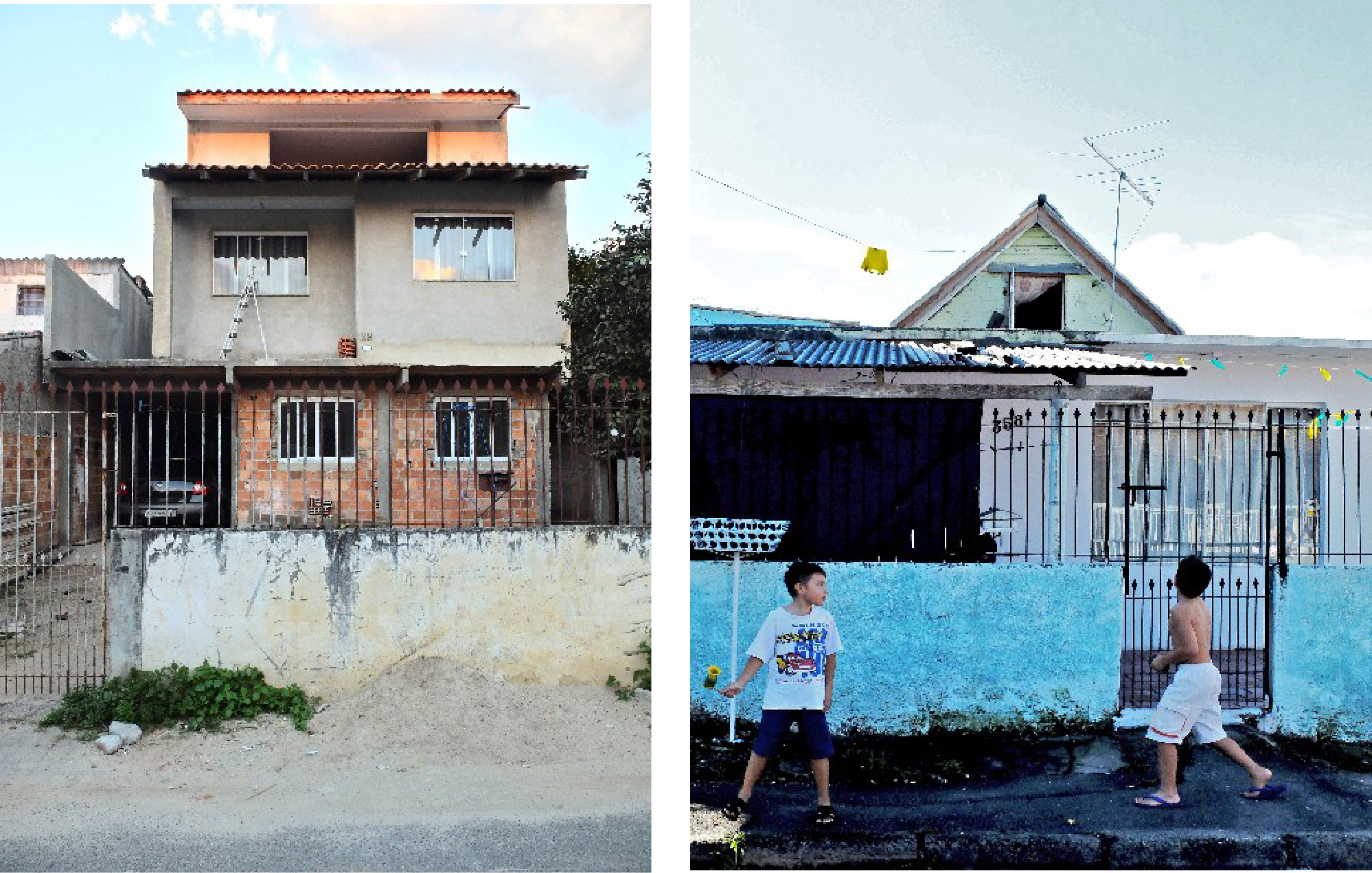 In order to provide a response to this case of spatial segregation and broad decay, we developed a complete proposal of reevaluation of the area, with the purpose of making it compact, multi-centered, socially and functionally mixed, environmentally sustainable and suitable for future growth.

The increase in life expectancy, the decrease in birth rate, the strong urbanization and the global environmental crisis are all factors that should be considered during the planning process. In addition, the massive land consumption and the urban sprawl are unsustainable, it is therefore necessary to reconsider the urgent dwelling issue according to sustainability standards, allowing the public space to regain its social function. 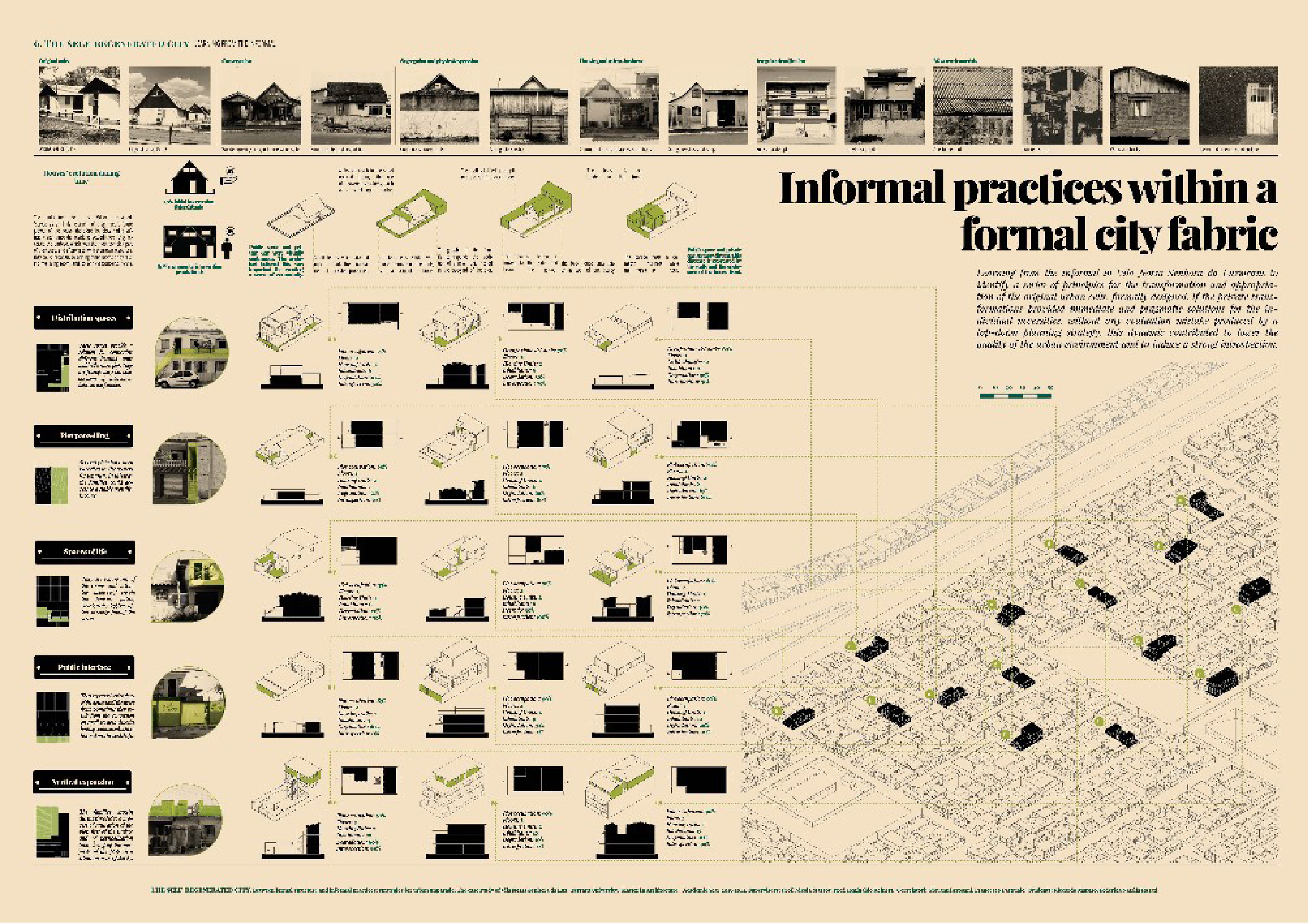 We propose a densification of the urban fabric in order to activate the dynamics of optimization and sharing of spaces and infrastructures, giving the neighborhood better growth perspectives. A review of the housing strategic plan is crucial to achieve a more responsive development. Considering the socio-economic difficulties of the inhabitants, the municipality is regarded as the main agent of this transformation program, capable to integrate informal strategies into formal urban policies. The reform of the urban fabric uses a multiple-scale approach. The standard urban block structure and its boundaries are questioned to identify a new hierarchical relation between building types and street patterns.

To develop the new collective block, a number of cooperatives are created to enhance individual participation and expectation of new emerging social rules. Their creation is subsidized and funded by the federal program Minha Casa Minha Vida–Entitades, which also provides technical support to facilitate self-construction.
The new cooperatives' framework was the occasion to get rid of the planned distinction between private and public realm in order to achieve a more suitable integration between housing and public facilities. The proposed building typologies result from a preliminary study of informal housing solutions that have been developed in the neighborhood over the years.

Cooperatives are given the opportunity to increase volume and floors' number, in accordance with the new regulations established for the area, in exchange of a desaturation of the macro-plot, its permeability and accessibility for the entire community. The families have the possibility to start commercial activities on the ground floor and to get advantages from the management of the new public space. The funds gained from the sale or rent of the new properties are used to improve new streets paving, landscaping and furniture. 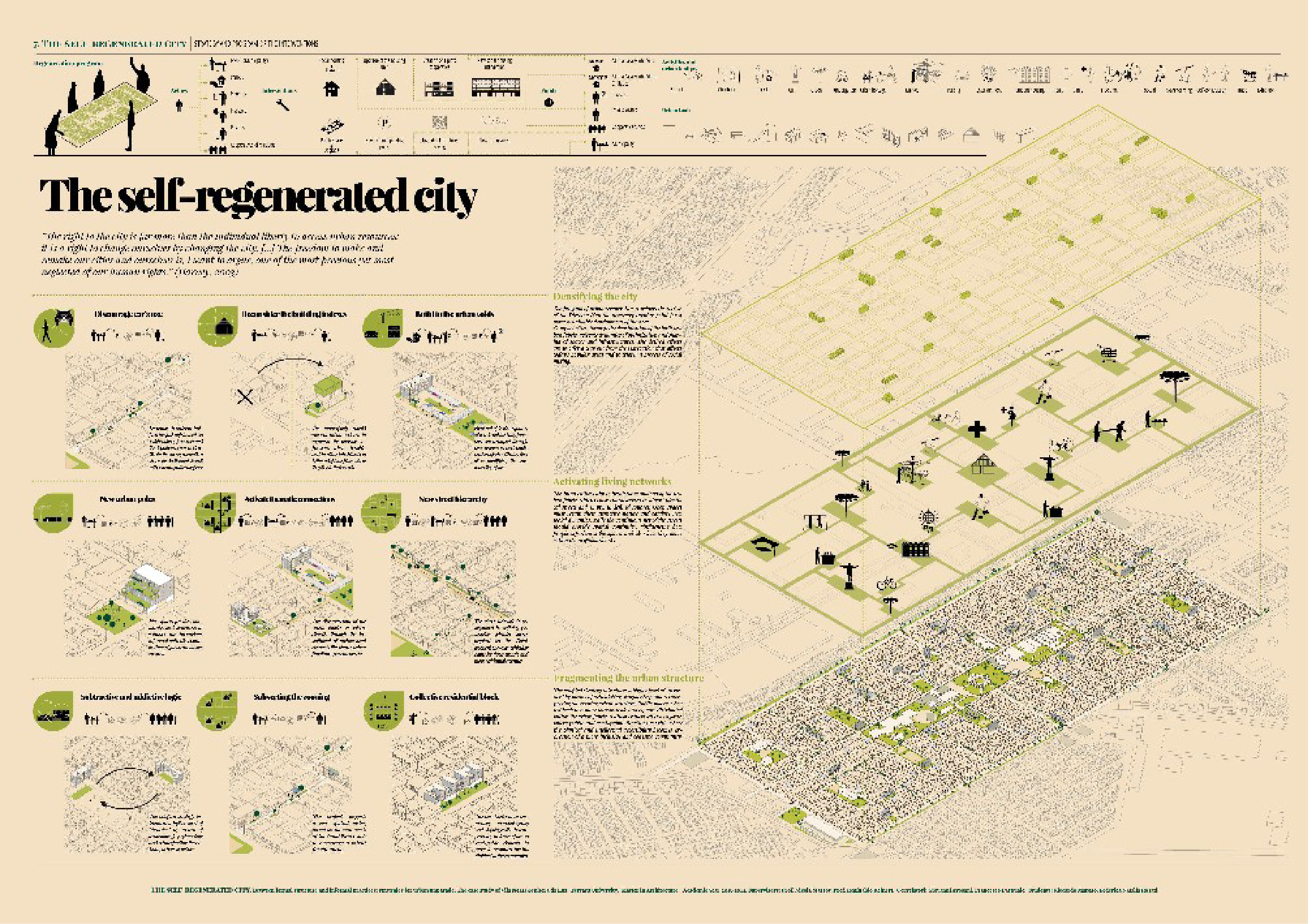 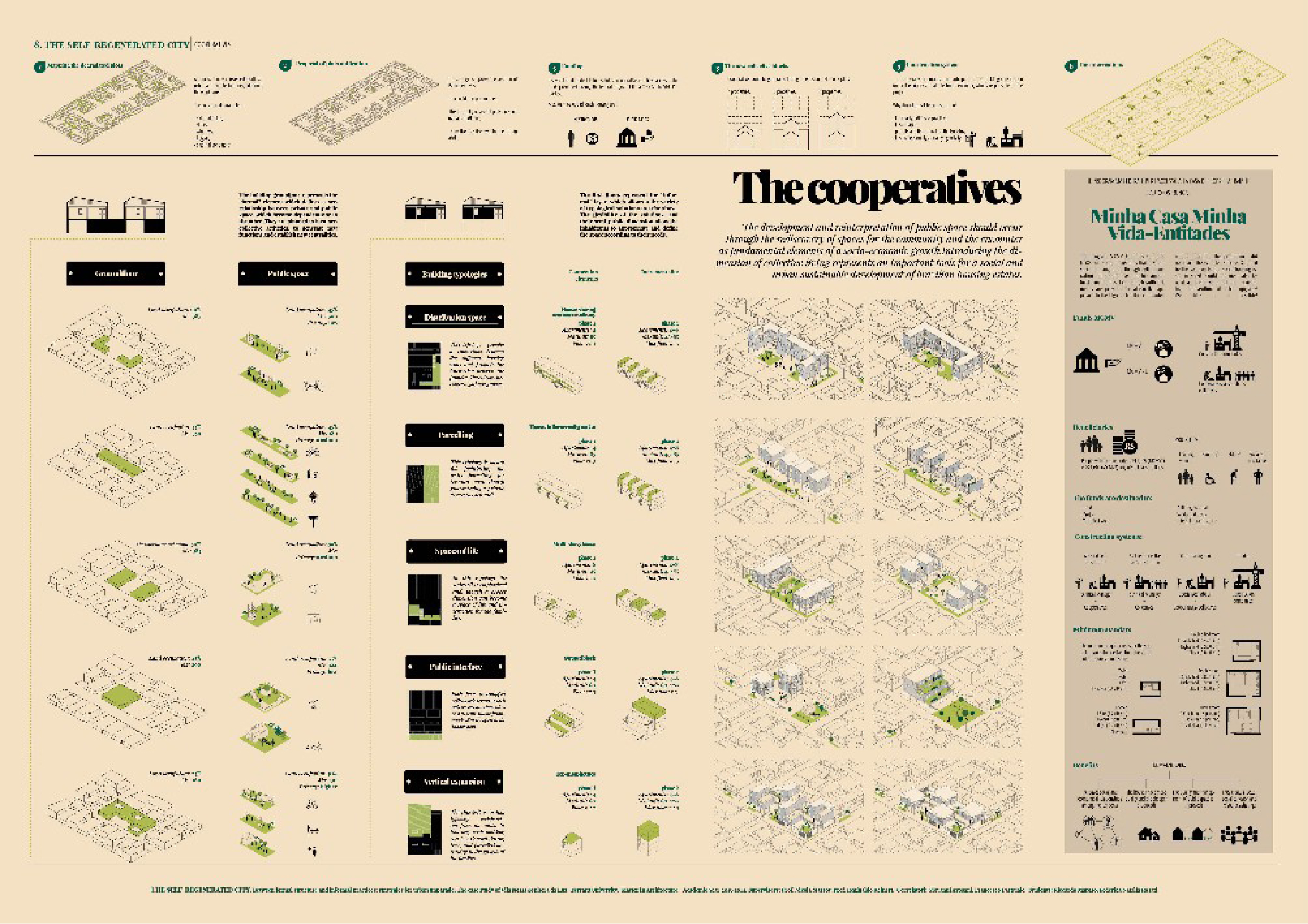 The "top-on-top houses" typology tackles the issue of incremental growth. Considering the permeability of parcels as an important condition for improving the area, the proposed solution is organized around a public square and three semi-private patios which give access to the housing units.
On the first floor, four 60 m2 units are articulated along a wide distribution space, designed to be appropriated over time by the families. Each unit is served by an independent staircase that allows a further subdivision of the property for tenancy.

Last but not least, local building system and materials are used to support the local economy. The materials and techniques employed, such as the reinforced concrete structure or the pierced brick walls, traditionally called cobogò, are part of the community's know-how.
The project also provides the opportunity of a vertical expansion through a wooden roof structure that can be easily disassembled and reassembled over time.

We believe that the transformation potential of Vila Nossa Senhora da Luz and similar informal areas should emanate from their own dynamic structure and from their inhabitants' ability to adapt the environment to the constant change.

The self-regenerative capacity of the city lies in their informal practice. In addition, an adequate formal motivation would offer input for the creation of an additional degree of complexity. Rethinking the city's fabric implies to review building indexes and reshape the limits (formalize) within which the community, rather than the individual, could, with a certain degree of flexibility, adapts the city to its needs (informalize).

This urban regeneration program is guided by the idea that the urban fabric can be empowered through a new system of hybrid spaces where the interaction between the private and public dimension can be restored.
In this sense, housing becomes a mean to generate spaces for social innovations, spaces where the citizens, through collective commitment without undermining their own individualities, could contribute in the construction of a more equal and cohesive community.

Photos via author unless otherwise mentioned. 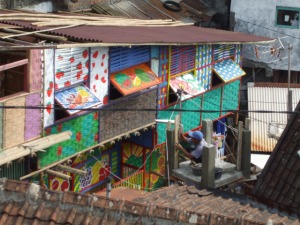